ITV Launches Shoppable TV Offering
British broadcaster ITV this week launched a new shoppable TV product, which lets viewers identify and buy products which appear in ITV programmes. The product uses visual recognition technology created by contextual tech business The Take, which is built into LG TVs. Viewers access the shoppable interface via their remote on LG TVs, and complete purchases either via the vendor’s website, or via a link sent to their phone.

The tool is being trialled with an integration between ITV’s popular reality show Love Island and retailer Boots, and ITV says it is in talks with other potential commercial partners.

“This is a unique commercial opportunity and the next natural step in what we can offer to brands,” said Bhavit Chandrani, ITV’s director of digital and creative partnerships. “Love Island has been a fantastic platform for innovation in how we work with commercial partners over the past few years and is the perfect show to introduce shoppable TV before we roll it out across other programmes.” 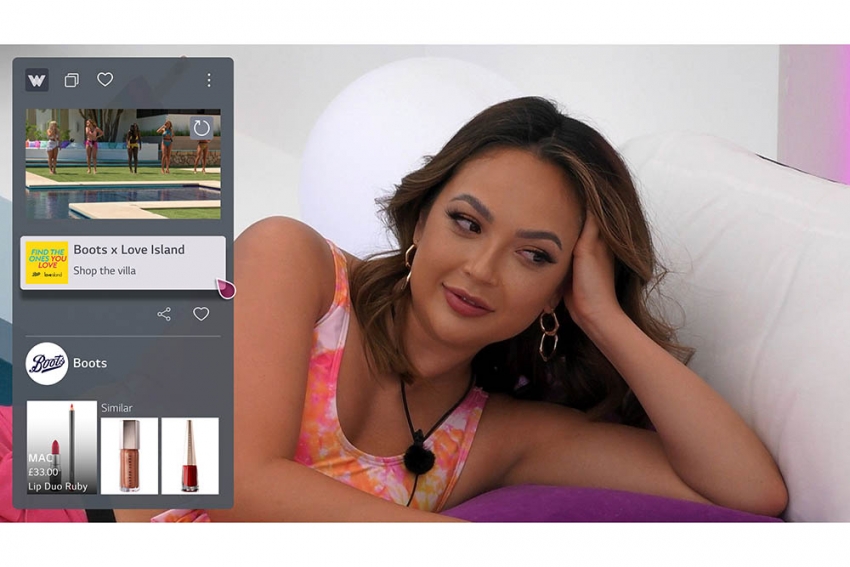 Mobile App Video Fraud Up 50 Percent Year-on-Year, Say DoubleVerify
Ad fraud on mobile app videos is up 50 percent year-on-year, according to new research from measurement and verification specialist DoubleVerify. Although the report finds that post-bid fraud decreased by 19 percent year-on-year, fraud is still a significant issue, with DoubleVerify detecting an average of half a million new fraudulent devices everyday.

This data was produced by DoubleVerify as part of their annual Global Insights Report. The report covers 2,100 brands across 80 countries.

The report also found that the audibility of videos is one challenging area for marketers. According to the report, just 15 percent of video ads were both audible and in view on completion.

Ozone Trials Guaranteed Outcomes for Video Campaigns
The Ozone Project, an ad platform built from a coalition of premium UK publishers, announced this week that it is beginning to test running outcome-based campaigns for its publishers’ outstream video inventory.

The trial, conducted with media agency MG OMD, will give clients guarantees over specific metrics, with clients only paying when these metrics are fulfilled. For example in the test run, Ozone will offer cost per completed view guarantees, and clients will only pay for ads which are fully viewed.

“This is a very exciting partnership for us, driven by the advertiser need to deliver real business results through high attention environments,” said Craig Tuck, The Ozone Project’s CRO. “we’re excited to learn more about our capabilities in this space as we optimise campaigns to meet MG OMD’s client goals.”

Jeff Bezos Steps Down as Amazon CEO
On Monday, Jeff Bezos officially stepped down as Amazon’s CEO. The world’s wealthiest man is stepping down to focus on “new products and early initiatives”. Bezos remains Amazon’s single biggest shareholder, with ten percent of the shares. Andy Jassy has taken over as CEO.

Data Shows Advertisers are Shifting Towards Android
Advertisers are shifting their ad spend away from Apple and Towards Android. This shift is down to Apple’s tracking change, which prompts users to consent to opt in to tracking in every appl. According to figures from ad-measurement firm Branch Metrics Inc, less than a third of users are opting in. Mobile ads on iOS now cost less, while ads on Android have risen in price.

Altice Plans to Cash In on Teads Via an IPO
Teads, an ad tech company which specialises in outstream video advertising, is being spun off by its parent company Altice via an initial public offering (IPO). Altice has not yet disclosed what sort of valuation it is seeking from its public listing, which will see Teads traded on the NASDAQ Global Select Market. Read the full story on VideoWeek.

Video Intelligence Launches New Contextual Offering for CTV
Contextual advertising specialist video intelligence is launching a new product for CTV, which will see vi’s tech analyse video and its metadata to define contextual categories, which can then be used for targeting. The company will sell inventory on behalf of publishers via private marketplaces (PMPs), with Rakuten Advertising among its launch partners.

Simulmedia Launches playerWON
Earlier this week, Simulmedia launched playerWON, a new platform aimed at bringing TV-like ads to gaming. It announced that it had deals with major gaming publishers like EA. However, later EA issued a statement saying no such deal existed and that “in-game advertising for console games is not something [they’re] currently looking at.” There was some online backlash following Simulmedia’s announcement from gamers.

The Trade Desk Unveils Reworked Platform ‘Solimar’
The Trade Desk this afternoon announced the launch of its new trading platform ‘Solimar’. Among Solimar’s key features are an ability to more easily optimise campaigns based on specific performance KPIs, and new tools for onboarding first-party data. The Trade Desk says Solimar “enables marketers to unleash the power of their valuable first-party data and drive greater precision in their digital marketing campaigns, while advancing consumer-conscious privacy”. Read the full story on VideoWeek.

Outbrain Raises $200 Million
Web recommendation platform, Outbrain, which filed for an IPO last month has raised $200 million in funding from investment manager Baupost Group. However, the company did not reveal the valuation at which the new capital was raised. Rival Taboola, agreed to go public at the beginning of this year with a SPAC merger.

Clear Channel to Support Black-Owned Businesses with Free Advertising
Outdoor advertising specialist, Clear Channel is offering free advertising to selected black-owned businesses. Clear Channel Compass is a pro bono initiative run in collaboration with Jamii, the marketplace for Black British creators. The businesses can be either online or physical and will have access to advertising across Clear Channel’s network of screens.

Disney+ Growth Slows in First Half of 2021
Disney+ saw a sharp slow in US subscriber growth in the first half of 2021, according to internal data. Most of the growth that the streaming service did see was in Latin America and India. Disney+ had a little more than 110 million total subscribers late in Disney’s third fiscal quarter, which ran through early July, according to the internal data, up from the 103.6 million the previous quarter.

Sky and Channel 4 Expand Wide-Ranging Partnership
Sky and Channel 4 this week announce they have extended their wide ranging partnership, a deal which will see Channel 4 utilise addressable ad tech provided by FreeWheel – owned by Sky’s parent company Comcast – on its linear and on-demand inventory on Sky’s platforms.

BBC Cuts Pay for Its Top Stars
The BBC said it had cut spending on its top stars by ten percent over the last financial year. The highest paid star remains Gary Lineker who presents “Match of the Day”. Lineker is being paid around £1.36 million, down from £1.75 million.

La Liga Ends Facebook Deal and Returns to Traditional TV in India
La Liga, the Spanish football league, will return to traditional TV in the Indian subcontinent, and will end a deal it signed with Facebook. The deal, which was signed three years ago, saw the football matches broadcast free of charge on the social media platform. Instead, the league will be broadcast on Viacom18 network’s youth television channel MTV and some national and regional channels. La Liga matches will also be live-streamed on Voot and Jio platforms as part of the three-year deal.

Mediaset Expects Football Ad Revenues to Surpass €100 Million
Italian broadcasting company expects to earn in excess of €100 million from advertising from its football coverage. CEO of Mediaset Pier Silvio Berlusconi told journalists that the 2020 budget closed “much above expectations”, while the one for 2021 “will be excellent”.  Berlusconi says that Mediaset closed the first half of 2021 with a 31.5 percent increase in ad revenues.

Apple TV+ Purchases a Button on Roku Remotes
Apple has bought a button on Roku’s remotes for its streaming service, Apple TV+. The move was not formally announced, but came to light when Roku posted a picture of its new remote on its website. The new remote had easy-access buttons for Netflix, Disney+, Hulu, and Apple TV+.

TikTok May Be Developing a Cameo Rival called “Shoutouts”
There are reports that TikTok is developing a rival to Cameo called “TikTok Shoutouts”. Cameo is a service where users can pay for personalised videos from celebrities. TikTok’s service would allow users to order videos from creators on the platform. According to screenshots posted by Fabian Ouwehand, the cofounder of Amsterdam-based TikToker management company Many, some TikTok creators now have the ability to offer these commissioned videos.

Trump Sues Social Media Platforms to Restore Online Profile
Former US President Donald Trump has sued Facebook, Google and Twitter in an attempt to restore his social media presence. Trump was the most prominent plaintiff seeking class-action status against the tech companies, claiming he has been wrongly censored by them in violation of his First Amendment rights to freedom of speech.

TikToks Can Now Be Up to Three Minutes in Length
TikTok is now increasing the length that videos can be on the platform to three minutes. Previously videos on the platform were capped at 60 seconds in length. The changes will be rolled out for all users “over the coming weeks”.

News UK Launches First-Party Data Platform
News UK, a newspaper publisher and radio broadcaster, has announced the launch of a first-party data platform, Nucleus. Nucleus will enable advertisers to reach the brand’s 36.5 million digital readers, listeners and viewers. News UK owns titles including The Times and The Sun and radio stations like Virgin Radio and TalkSport.

Nextdoor to Go Public Via SPAC Merger
Nextdoor is planning to go public through a merger with a special purpose acquisition company (SPAC). The neighbourhood connection app reached a deal to combine with a SPAC sponsored by venture-capital firm Khosla Ventures on Tuesday. The deal values Nextdoor at $4.3 billion.

US Ad Market Adds Nearly 10,000 Jobs in June
Employment in advertising, public relations and related services grew by 9,700 in June, the largest ever increase in one month, according to data from AdAge.

Dentsu Struggles with Olympic Campaigns
Japanese agency group has become somewhat burdened by its work around the Tokyo Olympics, the Financial Times reported this week. Sponsors signed up to the Olympics by Dentsu have brought in outside experts to assess the damage of continuing to trust Dentsu with their campaigns, and of remaining associated with the Games given their controversy in Japan, according to the report.

Dentsu Buys LiveArea
Dentsu this week agreed a deal to acquire customer experience and commerce agency LiveArea from ecommerce business PFSweb, for a fee reported to be around $250 million. LiveArea will be integrated into Merkle, a customer experience management agency which Dentsu holds a majority stake in.

GroupM Creates 90 New UK Digital Marketing Apprenticeships
GroupM is creating more than 90 new digital marketing apprenticeships in the UK, based in London and Manchester, via a partnership with edtech startup Multiverse. The programme will last 15 months, and allow students to specialise in search, social, programmatic and e-commerce digital marketing.

Facebook Hires Diane Jackson as Director, Global Head of Production.
Diane Jackson joins Facebook’s global marketing team as its director, global head of production. Jackson is another departee from DDB, where she worked for 14 years, most recently as chief production officer.

The Six Biggest Questions Facing Media and Advertising in 2021, read on VideoWeek

Is Big Tech Becoming Too Big to Sustain? A List of Ongoing Antitrust Cases in the US and Europe, read on VideoWeek

How Putting Up Paywalls Can Actually Boost Ad Revenues, read on VideoWeek

Altice Plans to Cash In on Teads Via an IPO, read on VideoWeek

Does Amazon Have the Power to Hamstring FLoC? read on VideoWeek