Why TikTok Sees an Opportunity on CTV

Why TikTok Sees an Opportunity on CTV 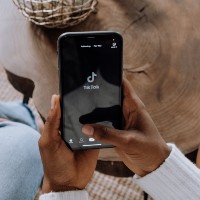 TikTok launched its first connected-TV app for Samsung TVs last November, and followed that up earlier this month by launching on Google TV and other Android-powered smart TVs.

The move was fairly unusual. Despite all the excitement around connected TV in the media world, the majority of social media apps haven’t made the jump. YouTube is the obvious exception, with YouTube’s CTV presence well established, and some media agencies are now experimenting with CTV-first YouTube campaigns.

But the likes of Instagram, Facebook Watch, Snapchat, and TikTok’s numerous imitators have yet to invest in CTV.

Greg Turtle, user growth lead for Europe at TikTok, said that TikTok’s jump to connected TV was in part inspired by CTV’s growing popularity. “Smart TV usage has seen fantastic growth in recent years,” he said. “Users of all ages are increasingly savvy at getting the most from their connected devices, using it for far more than just traditional long-form programming. This led us to think about how the TikTok experience can be amplified and turned into a format that people can enjoy together on the same screen.”

The app has been adapted to work better in the living room environment. Users still see curated feeds of content based on their interests and who they follow. But there is no ‘Discover’ page. Instead there are 12 categories of content to choose from (such as animals, comedy, and food), essentially creating channels for users to flick between.

But while the app has been reworked for CTV, Turtle says that TikTok in some ways already provides a TV-like experience, making it a good fit for TV sets.

“A large part of what people love about TikTok is already part of the TV experience – it is a full-screen, sound on experience that allows users to feel like they are part of a shared cultural moment. The content is short, snappy and carries the same richness as the entertainment or lifestyle content we are used to seeing on TV screens,” said Turtle.

Liam Brennan, global director of innovation at Mediacom, agrees that TikTok is a natural fit for TV, and perhaps more so than other social video apps.

“One of the benefits of TikTok is you don’t need to log in or contribute to start watching content, it’s sort of like it’s like a TV channel in itself,” he said. “And I think what’s interesting about TikTok is that it really does feel like the next generation of TV. I’ve heard them using the word ‘TV 2.0’ before, and it does feel like they’re trying to establish a next generation TV network that lends itself to that format.”

Brennan said other, similar apps might have a harder time making the transition. “Instagram is the other one that might lend itself to CTV,” he said. “But if you look at an app like Snapchat, that’s very personalised. Most of the content is sent between two people, it’s not something you want to sit back and watch on TV. So I’m not sure we’ll see many others investing in CTV, just because of the nature of the content they make.”

A Tempting Proposition for Brands

For the moment, TikTok’s CTV app is ad free. “ We want to focus on getting the experience right for our community as a priority,” explained TikTok’s Greg Turtle.

But if TikTok does introduce ads to its TV app, it could prove a tempting prospect for advertisers.

While the content would be the same, TikTok on CTV could be more directly linked to mainstream programming. “We want TikTok to be seen as a destination for those who want to enjoy TikTok with their friends and family in a shared setting, particularly around bigger cultural moments,” said Turtle. “For example, we may see families watching the Euro 2020 matches and then turning to TikTok for ‘an extra slice’ reaction – whether it’s fan reactions or unique renditions of the content.”

Brands might want to target these sorts of moments specifically, serving ads to users as they switch from major sports events over to related content on TikTok.

CTV buys are often traded in a similar manner to traditional TV campaigns said Brennan, where the focus is on getting a certain volume of reach for a specific audience. And TikTok’s user base is difficult to reach on TV, meaning TikTok’s CTV app could be one of a very few channels available on CTV for reaching those younger audiences.

Brennan added that TikTok might pick up whole new audiences through its CTV app which it doesn’t currently reach on mobile.

Other social video apps, if they do make the jump to CTV, could also prove popular with media planners. And if TikTok makes a success of CTV, that might encourage others to follow suit.