YouTube Positions Itself as a CTV Gateway with Primetime Channels

YouTube Positions Itself as a CTV Gateway with Primetime Channels 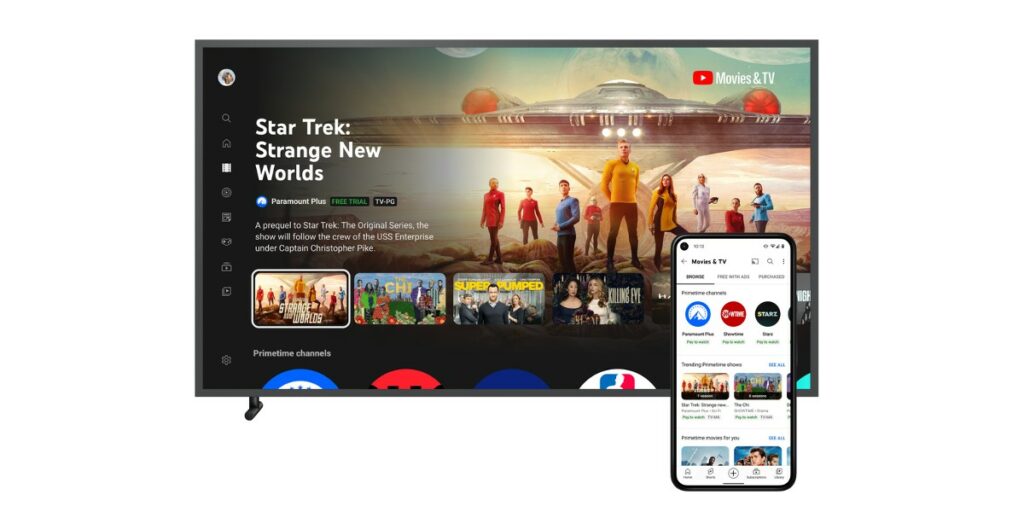 YouTube has today announced the launch of ‘Primetime Channels’, which will let users buy subscriptions and watch content from third-party streaming services including Paramount+, Showtime, Starz, and AMC+ directly within YouTube. With the new feature, YouTube appears to be continuing to position itself as a hub for all CTV content, increasing its influence in the CTV landscape.

Primetime Channels will appear within YouTube’s existing ‘Movies & Shows’ tab, YouTube’s hub for films and TV content which it has been gradually fleshing out over the past few years. Other streaming services available through YouTube include Shudder, CuriosityStream, Hallmark Movies Now, ViX+, and Atres Player.

Primetime channels is only available in the US for the time being, though the video platform confirmed that it has plans for international expansion.

One CTV app to rule them all

In a blog post announcing the new feature, YouTube pitched Primetime Channels as a way of simplifying the fractured CTV landscape from a user’s point of view. “With more streaming options than ever before, it can get a little overwhelming jumping from app to app to find what you’re looking for,” said Erin Teague, director of product management at YouTube.

But it looks likely to be part of a wider effort to position YouTube as a one-stop shop for CTV content. Alongside these premium channels and YouTube’s vast catalogue of user-generated content, the app also hosts films and TV shows to rent or buy, as well as a range of free ad-supported streaming TV (FAST) channels within the Movies & Series hub.

For partnered streaming services, YouTube provides an extra point of distribution, potentially helping bring in more subscription revenues. But from YouTube’s point of view, if more CTV viewing becomes concentrated within its own walls, it can come to exert more power over these same media partners through its role as a gatekeeper.

This can manifest itself in several ways. The specifics of the partnerships between companies involved in Primetime Channels and YouTube haven’t been disclosed, but it would be perfectly possible for YouTube to ask for a carriage fee in the future, or for access to a chunk of ad inventory on any ad-supported services (if it doesn’t already). This is already fairly standard practice for other CTV platforms, so it’s perfectly possible that YouTube could tread that same path.

YouTube could also charge media companies to have their services appear more prominently within its interface, or for their content to be surfaced more regularly in users’ recommended feeds – again standard practice on other CTV platforms.

Of course none of this is a given – and even YouTube would have a big fight on its hands if it’s trying to establish itself as a real one-stop shop for CTV. There are plenty of CTV platforms, smart TVs, and rival CTV apps all trying to fight for the same position. And YouTube is currently missing most of the major streaming apps including Netflix, Disney+, and HBO Max.