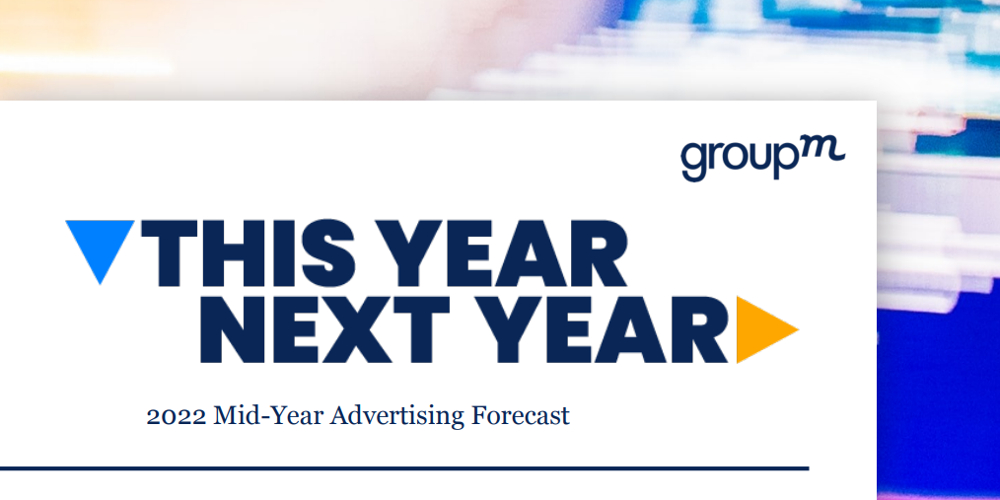 WPP’s media unit GroupM says it remains confident that the global advertising industry will have a strong year in 2022, despite fears of an impending recession and ongoing geopolitical crises around the world. GroupM’s forecast, unveiled in today’s ‘This Year Next Year’ forecast, projects that the advertising industry as a whole will grow by 8.4 percent this year (excluding the effects of US political ad spending).

GroupM’s projection is actually a significant downgrade from its previous forecast in December, when the media group predicted 9.7 percent growth for 2022. But GroupM says its revision is due to changes in specific markets and media channels, rather than global economic conditions dragging the advertising industry down. 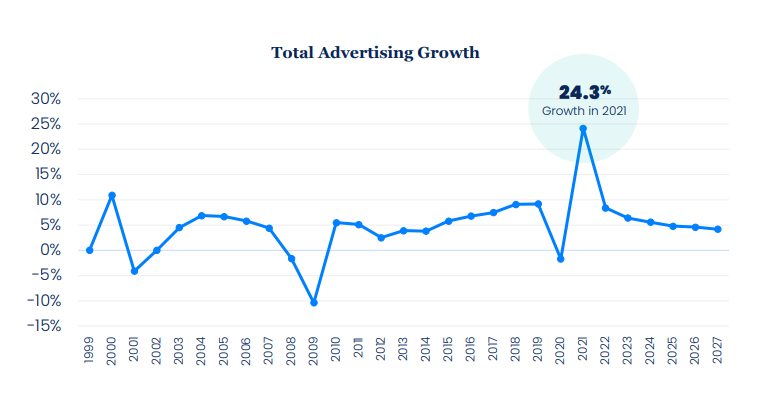 China for example, which accounted for 20 percent of global advertising in 2021, is now expected to grow by just 3.3 percent in 2022, a dramatic fall from the previous forecast of 10.2 percent. This change is due in large part to China’s “dynamic zero COVID-19 strategy” which has seen strict lockdowns implemented in major cities in the first half of the year.

And the slowing growth rate of e-commerce related media spend is also having a significant impact – but GroupM says this deceleration should be unsurprising, given how high growth in e-commerce media activity was last year.

Looking at global economic conditions however, GroupM says it doesn’t expect the impact to be as bad as first appearances might suggest.

Inflation will be high across 2022, expected to sit at 6.9 percent. But GroupM says that so long as economic activity still grows at a faster rate than inflation (i.e real growth), then inflation is a positive contributor to advertising growth. And GroupM expects global real growth to outpace that of 2019 (though some markets may experience economic downturns). The agency cited consensus estimates among bank economists at the end of April which predicted 3.5 percent real global growth in economic activity across 2022.

Another commonly cited threat is that if interest rates increase due to inflation, economic activity – and therefore advertising – will slow down due to the higher costs of capital. But GroupM says interest rate rises have been low in absolute terms – rising from zero to 1 percent or 1.5 percent in the US, UK, and Canada.

All of the above factors mean that outside of China, GroupM is optimistic for the year ahead.

For the UK specifically, GroupM forecasts 9.3 percent growth in 2022, which is actually an upward revision from December. In the US meanwhile, GroupM’s forecast was downgraded just slightly from 9.8 percent last December to 9.3 percent.

Another interesting take from GroupM’s forecast is that TV’s resurgence is predicted to continue, with 4.4 percent global growth expected (excluding the impact of US political advertising). Specifically, GroupM says it’s increasingly convinced that connected TV services are succeeding in attracting spend from advertisers who would likely have otherwise spent on other forms of digital media. This is very significant, showing that connected TV growth is not just moving TV budgets between different types of TV, but that it’s actually delivering incremental growth.

GroupM however added that it still expects TV growth to flatten in the coming years – and that in the long term connected TV will prove better at capturing a growing chunk of existing budgets, rather than attracting more investment into the industry.