When Google first announced its plans to phase out support for third-party cookies in Chrome at the beginning of 2020, it set a two year timeline to complete this transition.

This would give enough time, Google hoped, to create and test privacy-safe alternatives within its Privacy Sandbox. The idea was that within that two year timeframe, third-party cookies would have become obsolete anyway, meaning the industry would be ready to move on to Sandbox APIs.

The wider digital advertising never quite shared Google’s optimism around how quickly workable cookie alternatives could be conjured up. And there was a sense of relief for some when Google announced last year that it had decided to extend its deadline, aiming for cookies to be completely phased out in Q3 2023.

But since this extension, progress has been slower than hoped – not helped by the Federated Learning of Cohorts (FLoC) API being scrapped and replaced with Topics API.

As a result, unless the deadline is extended further, Sandbox proposals will have significantly less time for testing than was originally planned. This is particularly problematic since there are, as Google acknowledges, still unresolved issues across all of these proposals.

A tale of two timelines

Last July, Google released a new timeline for its Privacy Sandbox proposals, outlining progress for each API, and detailing how much time each proposal was due to spend in development and testing.

For the APIs most relevant for digital advertising, those relating to ads personalisation and measurement, the original timelines were the same. Initial discussions, which could ideally include Origin trials, were scheduled to last through to the end of Q3 in 2021. Then the next three quarters were set aside for full testing – by this stage, it was expected that all technologies for each proposal would be developed, with the expectation that they may be refined based on further testing. The third quarter of 2022 was left as ‘ready for adoption’ – something of a buffer window, before the first transition phase begins in Q4. 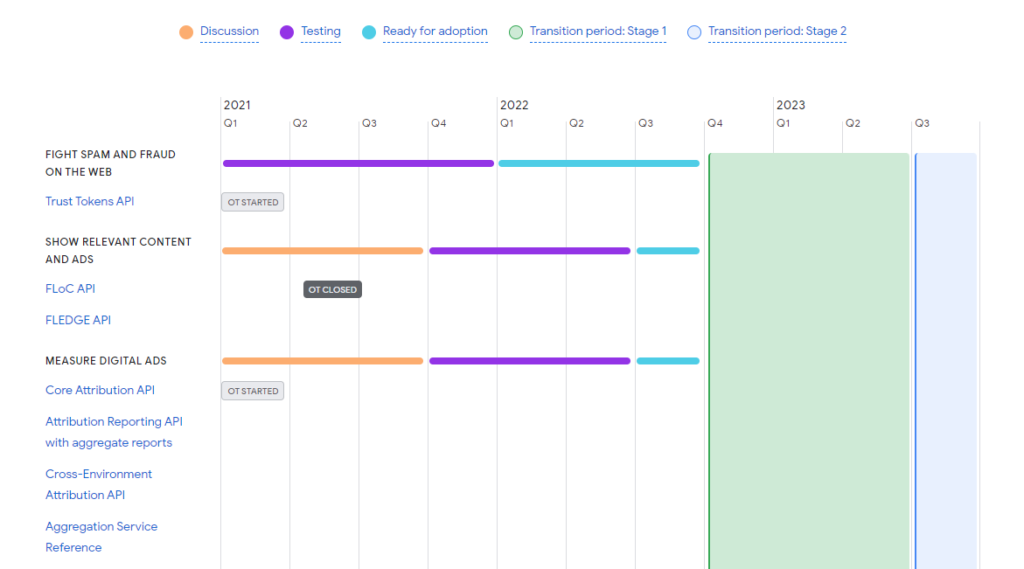 Now however, these timelines have significantly changed. The initial discussion period, according to the most recent timeline, stretched through to the end of 2021. This has left between Q1 and Q3 this year for testing, without the buffer ‘ready for adoption’ period.

This in and of itself isn’t a massive change – and Google acknowledged from the off that these timelines weren’t set in stone. But what’s significant is that initial Origin trials are now just starting during the full testing stage (with the exception of the Attribution Reporting API, which began its second Origin trial during Q1 this year).

This is significant since it means the three quarter long testing period isn’t reserved for testing out fully developed and fleshed-out APIs. In the original wording, Google said of the testing period: “All technologies for the use case are available for developers to test and may be refined based on results.” This gave the impression that the testing period would be for figuring out how these tools work, and if any tweaks would be needed, prior to them going live.

Now the same text reads: “All technologies for the use case are available for early testing and origin trials to gather feedback. To start testing, APIs may be available to a limited amount of Chrome traffic. Testing may happen at any point during the quarter.” This suggests the testing window is being used for early testing to shape the design of these APIs, and determine whether they even work as intended, and then also to get a feel for how to use them.

This shortened timeframe for testing is most apparent for Topics API, which Google announced would replace FLoC back in January. Despite only being unveiled in January, the discussion period was already over according to Google’s timeline, with testing due to begin.

That’s not to say there’s been no room for discussion on Topics – it was itself the result of feedback on the earlier FLoC API. Nonetheless, Topics is markedly different from FLoC, and due to the lack of runway left until the first adoption stage, it has had to immediately begin early testing without room for further feedback.

No time to start over

None of this would matter too much if all of these proposals had, through extensive discussion and deliberation, reached a stage whereby they were by-and-large accepted by the digital ad industry, only requiring a few minor tweaks.

But this doesn’t appear to be the case. In a report submitted to the UK’s Competition and Markets Authority, as part of Google’s commitments made in response to the CMA’s antitrust concerns, Google’s summary of industry feedback shows that there are still some major issues to solve.

The most common complaint is the usefulness of the coarse-grained topics, which are the core of the API. Google’s response is that usefulness will be explored through testing, and that its taxonomy will evolve based on testing.

Other concerns include whether Topics will be useful for sites with low traffic or specialised content, debate over how the taxonomy should look, debate over whether sites should be able to influence their Topics classification, and worries that the noise included as part of the API will have too big of a negative impact.

And indeed some in the industry believe the whole idea is a non-starter, and like FLoC, should be replaced.

But with time already so tight, replacing Topics at this point would presumably be a complete non-starter – unless Google pushed back its deadline further.

As a result, Google and those involved in the W3C have a lot of their work on their hands trying to iron out issues and responding to industry feedback. And the wider industry is short on time to get to grips with these new tools – soon to be crucial parts of the digital advertising infrastructure – before they start rolling out later this year.