Lord Grade and ITV Consider Channel 4 Bids
Former chief executive of Channel 4, Lord Michael Grade, is reportedly considering a bid for the broadcaster as the UK Government contemplates privatising it. Grade has also been chairman of the BBC and executive chairman of ITV.

The UK Government opened a consultation on the privatisation of Channel 4, which is publicly owned and commercially funded, back in July. Other reportedly interested parties in the acquisition of the broadcaster include ITV and Comcast.

Grade has reportedly asked bankers at Rothschild to look into the prospects for acquiring Channel 4.

Amazon Launches Its Clean Room
Amazon has launched the Amazon Marketing Cloud (AMC), its cloud-based clean room. The clean room has been undergoing beta tests for two years, but has now been released to the general market.

Keerat Sharma, Amazon’s director of advertising engineering told AdExchanger that over 1,000 brands had signed up to the AMC, which they can now integrate with Amazon’s DSP for campaign measurement and analytics.

Amazon’s clean room is built specifically to support Amazon’s own media and ad tech offerings, according to AdExchanger, rather than as a product for the wider market.

UK Digital Video Revenues Up 60 Percent in Q2
Total UK digital video revenues were up 60.4 percent year-on-year in Q2, according to the latest Digital Publishers’ Revenue Index (DPRI) from the AOP and Deloitte. Video was one of the fastest growing revenue generators for publishers in the quarter ahead of display advertising revenues which were up 42.1 percent.

Overall, revenues for digital publishers were up 40.8 percent – impressive growth, though perhaps to be expected given revenues were dented by the pandemic last year. But Dan Ison, lead partner for telecommunications, media and entertainment at Deloitte, said the evidence shows the pandemic has driven long term behavioural changes in consumers which will benefit publishers.

“Deloitte’s latest Digital Consumer Trends research highlighted that 23 percent of UK consumers are more likely to read the news now than before the start of the pandemic, with 83 percent agreeing that ‘fake news’ is a big problem today,” said Ison. “Consumers are ready and willing to invest in quality, reliable reporting. The challenge now is for publishers to fortify reader loyalty with unmissable content.”

Amazon Fire Smart TVs Launched
Amazon has launched its Fire TV branded smart TVs in the US. Amazon has a distinct advantage over competitors like Roku, because it’s able to control the ranking of smart TVs on its site. This means that Amazon can put its smart TVs- literally- above the competition, something which it has already done on Amazon.com.

Unredacted Court Papers Reveal Extent of Google’s Alleged “Jedi Blue” Deal
Unredacted court papers from a Texas lawsuit have detailed the extent of Google and Facebook’s deal to beat header bidding. The deal, which is nicknamed “Jedi Blue”, was part of a “long-term strategy” between the two tech giants, the court documents allege. The court document alleges that Google engaged in a number of anti-competitive practices to beat the header bidding system.

Facebook Rebrands to “Meta”
Facebook announced a new name for its business on Thursday, the company will now be soon as “Meta”, a clear reference to its goal of building the metaverse. Meta also announced a rebranding for its Oculus VR headsets, starting in 2022 Oculus Quest products will be called “Meta Quest”. Some Oculus products will also be rebranded to bear the “Horizon” branding, which represents an expansion of the metaverse.

Google’s Q3 Earnings Beat Estimates
Google has reported its Q3 earnings, which have beat expectations, as its ad business remains buoyant. Google’s parent company Alphabet reported revenue of $53.62 billion versus the $52.62 billion that had been predicted. Unlike other tech companies, Google has seen positive results as the economy re-opens, as consumers increase their travel searches on the company’s search engine.

Digital Envoy Acquires Location Sciences’ Analytics Business
Digital Envoy, an IP and location data provider, has acquired the measurement business of Location Sciences. The acquisition will allow Digital Envoy to provide reports and visualisations on top of its existing products. Clients will be able to access these features without needing to share any Ad-ID or geographic coordinates associated with the analytics.

Chipotle Opens a Restaurant in Roblox Game
Mexican chain restaurant Chipotle has opened a virtual restaurant in Roblox. The event is a Halloween themed “Boorito” event, where Roblox users will have a chance to get real-life rewards. The first 30,000 Roblox users to put on virtual, Chipotle-themed costumes and visit the restaurant’s in-game location will receive a promo code for a free starter.

IPTV Numbers Will Exceed Cable in 2026, Says Report
A report from Digital TV Research says that IPTV subscribers will exceed cable numbers by 2026. The research predicts that IPTV will have 63 million more subscribers by 2026. Simon Murray, principal analyst at Digital TV Research, says that this trend will be primarily driven by China, where a shift from cable TV to IPTV is occurring.

HBO Max Launches in the Nordics and Spain
HBO rolled out its SVOD service, HBO Max in Spain and the Nordics, on Tuesday.  This represents HBO Max’s first foray into Europe, where it plans to roll out in 27 markets. Coinciding with the launch, HBO has also introduced a month-long promotion where new customers will get 50 percent off the standard subscription price for the lifetime of their subscription.

Google Says It is Pulling YouTube From Roku
Google says that after 9th December Roku device users will no longer be able to download any of the YouTube apps. The announcement comes following an ongoing dispute between Roku and Google. Roku accuses Google of negotiating for anti-competitive terms in their carriage deal; the two companies have been at a stalemate over the row.

BBC and ITV Make Climate Pledges
Ahead of COP26, which begins in Glasgow this weekend, two of the UK’s broadcasters have made pledges to have net zero emissions by 2030. The BBC made the pledge along with a strategy that included switching to renewables and electric vehicles and reducing business travel. ITV made the same pledge to net zero emissions, and also said it would become a zero waste and zero single use plastic business by 2030.

Sky Sports Has Highest Ever Day of Viewing
Sky Sports saw its highest ever day of viewing on 24th October. An average of 1.2 million viewers tuned into the coverage, peaking at 4.5 million viewers at 5.50pm during the Premier League match between Manchester United and Liverpool. The day also featured the ICC Men’s T20 World Cup match between India and Pakistan, and the USA Grand Prix.

Redbox Finishes Merger With Seaport
Redbox has completed its merger with Seaport, a special purpose acquisition company (SPAC) and therefore is now listed on the NASDAQ. The merged company will now be known as Redbox Entertainment. Redbox is a home entertainment company that began with rental DVDs over two decades ago.

Cameo Added to Apple SharePlay
Personalised video messaging service Cameo has been integrated into Apple’s co-watching feature SharePlay. Cameo says that 80 percent of the videos purchased on its platform are gifts.

PayPal Isn’t Pursuing Pinterest Deal
Payments company PayPal this week said it is not pursuing a deal to buy social platform Pinterest, following reports last week. Rumours had been swirling that PayPal might pay as much as $45 billion for the social sharing platform.

Twitter Weathers the iOS Storm
Twitter said in its Q3 financial results this week that it hasn’t been massively affected by Apple’s privacy changes – which Snapchat recently reported put a significant dent in its ad revenues. Total revenues in Q3 were up 37 percent year-on-year to $1.28 billion, while ad revenues were up 41 percent to $1.14 billion.

Spotify Continues Push into Video
Spotify this week began letting a wider selection of creators upload video podcasts, as it continues to explore opportunities in video. Spotify began testing video podcast over the summer with a small selection of creators, but creators will now be able to apply to be able to upload video through Spotify’s ‘Anchor’ podcasting platform.

Australian Publisher Says Facebook Isn’t Negotiating Over Payments
The Conversation, an Australian publication, has complained to Australian authorities that Facebook isn’t negotiating over payments for posting links to its content, despite a law which requires Facebook to do so. Australian Competition and Consumer Commission chairman Rod Sims said he was concerned by the reports.

Reddit Expands to Germany
Social sharing platform Reddit this week announced it is formally launching in Germany, with a dedicated office and team in Berlin. Reddit CEO Steve Huffman said the launch is part of Reddit’s ongoing commitment to expanding in non-English speaking countries.

Google Turned Off Daily Mail Ads Over ‘Perceived Derogatory Content’
Google has reimbursed UK news publisher the Daily Mail after turning off ads on its US site during the summer, due to “perceived derogatory content”. Ads were turned off for around four hours on July 30th – Google hasn’t specified which specific content triggered the ban.

WPP Raises Full Year Guidance After Strong Q3
WPP raised its full-year forecast for revenue growth from 11.5 percent to 12 percent, following a strong Q3. WPP’s like-for-like revenues minus pass-through costs were up 15.7 percent in Q3, ahead of market expectations of around 9.5 percent according to Reuters.

UK Ad Spend to Exceed £29 Billion This Year
UK ad spend is set to pass £29 billion this year, according to the latest Expenditure Report from the AA/WARC, representing annual growth of 24.8 percent. The report forecasts that Q4 spend will reach £7.9 billion, the highest ever level for the Christmas period. 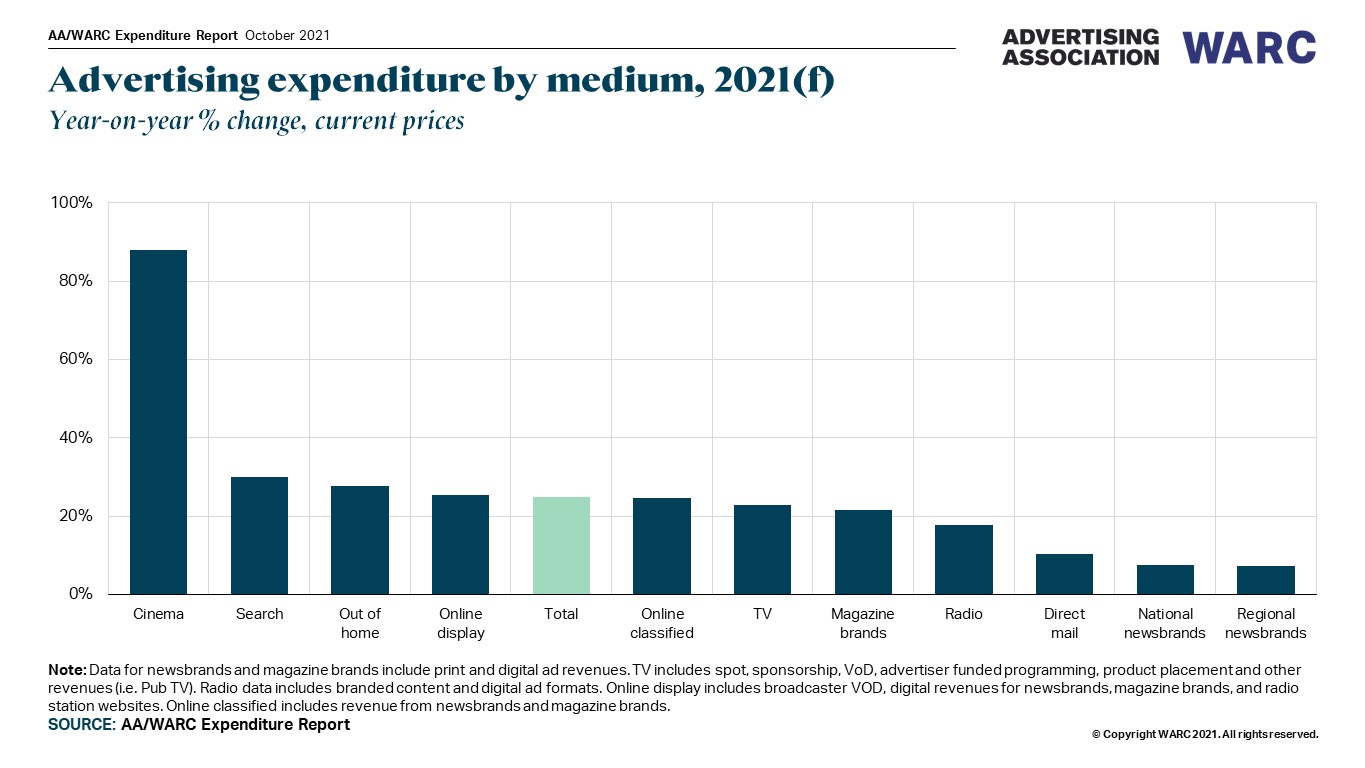 VCCP Launches Stoke-Based Academy
London-based agency VCCP has announced the launch of a new Stoke-based academy, designed to help recruit from the local area, and draw talent from a wider pool. The academy will offer training, mentoring, internships and apprenticeship opportunities to around 500 people in its first year.

Publicis Closes In on Facebooks’ Media Account
Publicis is close to winning Facebook’s media account, which is currently up for review, AdAge reported this week. Facebook is reportedly in the process of asking brands for references as it finalises its decision.

Burger King Questions Marketing Spend as Sales Lag
Burger King is questioning its marketing strategy in the US as sales lagged during Q3, according to The Drum. CEO Jose Cil said on an earnings call that the company hasn’t seen the returns it would have expected on its significant marketing spend, raising questions over marketing strategy.

Experts Say TikTok Has Made Genuine Progress on Brand Safety, read on VideoWeek

Broadcasters Are Increasingly Being Targeted by Ransomware Attacks, read on VideoWeek

How Going Green is Good for the Ad Industry, read on VideoWeek

Who Is Trying to Build the Metaverse? read on VideoWeek