Why AVOD Services Are Less Likely to Produce Emmy Winners

Why AVOD Services Are Less Likely to Produce Emmy Winners

The past few years have seen ad-supported video on-demand (AVOD) services increasingly finding success in competing for viewing time, amongst a crowded streaming market which has generally been dominated by the paid subscription (SVOD) services.

But AVOD services seem to be competing on rather different ground than their paid counterparts. Amongst the SVOD services, the streaming wars have been marked by huge spending on flagship original shows, or expensive rights deals for exclusive access to popular older shows. To an extent, each new entrant has been judged by their line-up or original and exclusive archive content, which is viewed as crucial to drawing in paying customers.

We’ve not seen this sort of activity on the AVOD front. Roku stands out as something of an exception, having built up a library of originals through its acquisition of now-defunct mobile streaming service Quibi. But otherwise, originals are few and far between in the AVOD world. And we’ve not seen the same sorts of major rights deals for popular older content made by AVOD services either.

And in fact, recent research from Ampere Analysis found that the overall quality of content – bases on critical ratings – on US AVOD services tends to be worse than that found on US SVODs. This is the case for both exclusive and non-exclusive content. 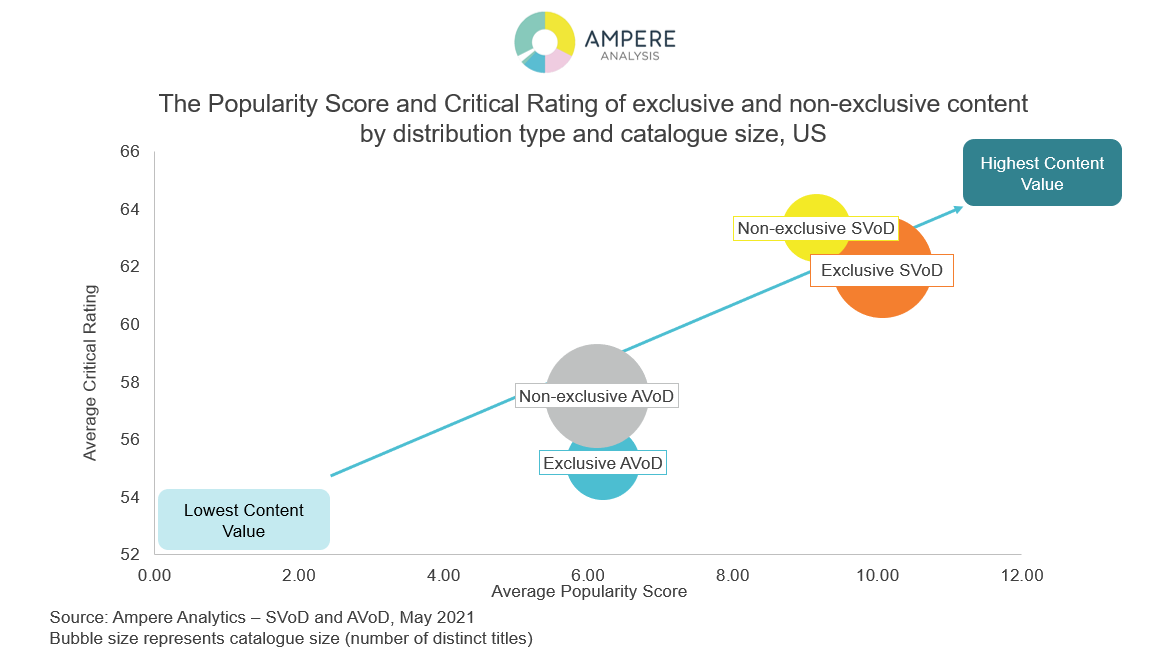 The picture would likely be quite different in the a market like the UK. In the US, most major broadcasters have opted for paid or hybrid models for the new streaming services. Meanwhile in the UK Channel 4 and ITV – both big spenders on original and exclusive content – prioritise their AVOD offerings.

Still, it raises an interesting question. Why does it make sense for a streaming-only company like Netflix to spend so much on expensive originals and exclusive series, but not for the likes of Pluto TV and XUMO?

Tom Bell, an analyst at Ampere, said that while both are competing for eyeballs to a certain extent, the metrics for success are different for each model.

“AVOD services aren’t reliant on a user committing to a subscription, so don’t rely on high-budget tentpole original titles in the same way as SVOD services do,” said Bell. “Instead, revenue is reliant on volume of consumption, so AVOD services’ content strategies tend to focus on having a large, diverse catalogue to keep users on the platform and drive viewing time, and therefore ad revenue.”

“In general, this results in a catalogue that is programmed with older, lower value (and cheaper to license) content,” Bell added. “This is consistent with the strategy for original content so far too, where creating lower cost per hour originals such as documentary and reality content is an effective way of creating exclusive content for the platform, but still fits in with their wider content strategy.”

That’s not to say that AVOD services are buying up sub-par content that consumers don’t enjoy, just to have as wide a range of content as possible. Research from Piplsay earlier this year found that 49 percent of Americans are “very satisfied” with the content available on AVOD services.

This may start to change, as AVOD services look to establish themselves ahead of their ad-supported rivals. Alongside Roku, IMDb TV, Crackle, Vudu and Tubi have all begun commissioning original content.

Lauren Anderson, co-head of content and programming at IMDb TV, said in an interview with Vulture that the fact that some of the most critically acclaimed shows of all time aired on traditional networks with ads means that AVOD services shouldn’t be limited in their ambition.

And undoubtedly, with AVOD services competing just for name recognition in an ever more crowded market, having a critically claimed original show could help with standing out from the pack.

But ultimately AVOD services’ will always prioritise keeping streaming hours high. And with that in mind, a 50 episode run-of-the-mill reality show will often look like a better bet than a ground-breaking three-part mini-series.