How Do The Industry’s Forecasts for the Coming Year Compare to Each Other?

How Do The Industry’s Forecasts for the Coming Year Compare to Each Other? 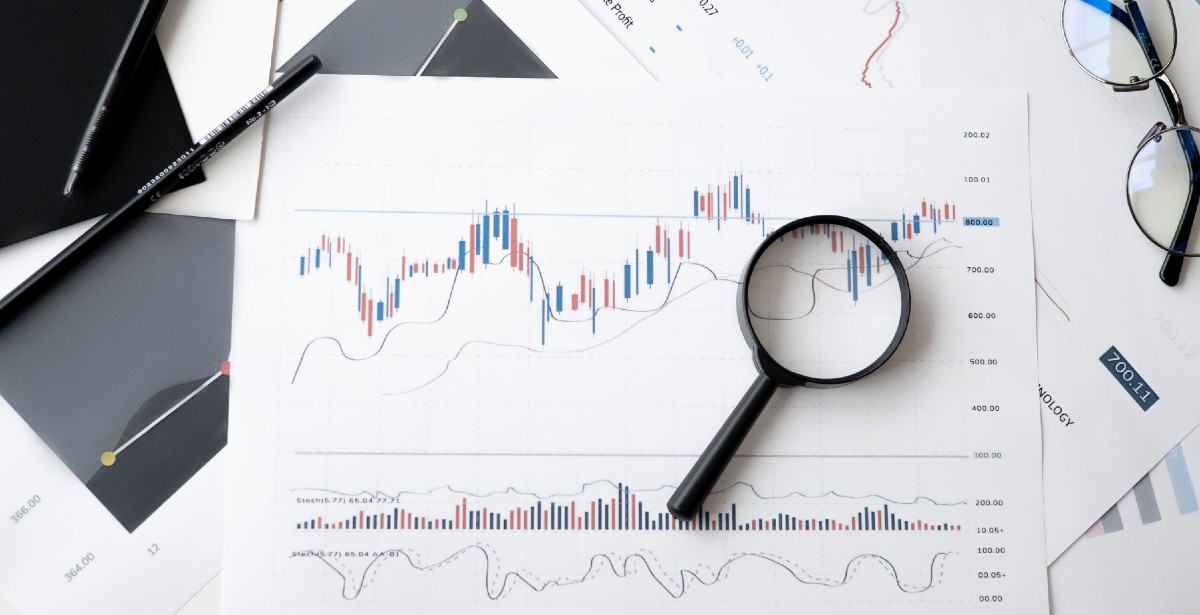 This time last year, there was a sense of cautious optimism in the ad industry after an extremely difficult H1. Lockdown measures were beginning to ease and economies were starting to reopen, as coronavirus infection rates in many Western countries fell.

In a sense, we find ourselves in a very similar place this year. Restrictions in many countries are, once again, being relaxed after a period of lockdowns at the start of the year, and sections of the economy are reopening. But there are some very significant differences. Some sectors which remained pretty much dormant last year, like travel, are starting to come back to life. And major sporting events like the Euros and the Olympic Games, which were cancelled last year, are back on – albeit with smaller crowds than usual.

Uncertainty does however remain, given coronavirus spikes caused by the highly infectious Delta variant. And there are questions around how quickly life will return to normal, which consumer habits developed over the pandemic will remain permanent, and whether we’ll see yet more rounds of restrictions introduced by national governments if the Delta variant continues to spread.

As with last year, there have been plenty of industry forecasts put out over the last few months predicting how all of this will affect the ad industry. But the constant stream of data can make it difficult to judge how aligned these forecasts are. Here’s VideoWeek’s guide to the industry’s forecasts for the coming year:

GroupM’s global This Year, Next Year report forecasts massive 19 percent growth in global advertising this year, having predicted just 5.6 percent growth in last year’s forecast. Growth is then expected to remain strong – but more in line with pre-pandemic levels – in the coming years, dropping to 8.8 percent in 2022, and 6.2 percent in 2023. 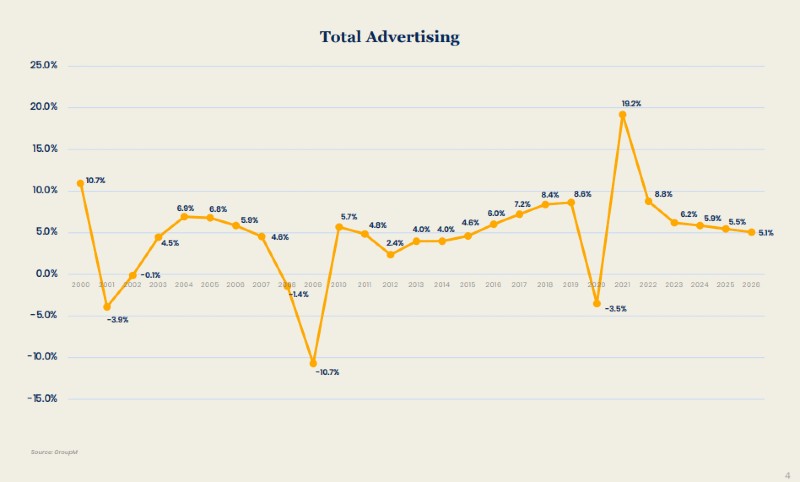 GroupM says alongside the general recovery from the pandemic, industry trends accelerated by the pandemic are prompting this rapid growth. . These include faster than expected expansions of app ecosystems, rapid small business formation activities and the growing role of cross-border media marketplaces, especially involving manufacturers based in China.

Digital media is, unsurprisingly, picked out as the main driver of growth, with pure-play digital media expected to grow 26 percent this year. But TV will also fare well according to GroupM, with growth pegged at 9.3 percent this year. And connected TV in particular is forecast to grow by 25 percent compared to last year.

Like GroupM, IPG-owned media agency MAGNA’s 2021 outlook is much more positive now than it was last year. The agency predicts total 2021 ad revenues will be up 14 percent year-on-year, representing a total recovery from the pandemic. Last year MAGNA didn’t expect a full recovery until at least 2022.

MAGNA says this strong growth will be caused by a general economic recovery, stronger-than-ever organic drivers to digital marketing, and international sports events like the Euros and the Tokyo Olympics.

And while growth will be higher in some countries than others, MAGNA says it expects growth in all 70 markets that it monitors. 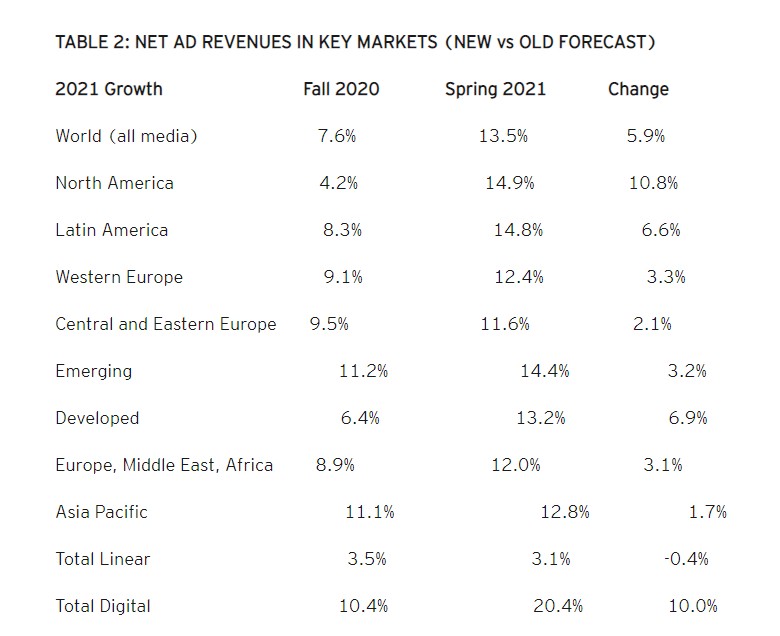 The Advertising Association and WARC’s most recent Expenditure Report, which looks at the UK specifically, has been revised upwards for the year ahead, though not nearly as drastically as GroupM and MAGNA’s.

The Expenditure Report forecasts 15.2 percent total growth year-on-year in UK ad spend in 2021, a modest increase on its prediction of 13.6 percent growth last year. However, last year’s reduction in ad spend ended up being much lower than the AA and WARC feared – a 7.2 percent contraction, rather than the 16.7 percent decline they had predicted.

Now, the AA and WARC forecast growth in every media channel. Cinema and digital out-of-home are expected to see the highest growth at 266.8 percent and 52.3 percent respectively, since both were hit hardest during the pandemic. TV is also expected to see solid growth, with TV ad revenues as a whole up 8.8 percent, and ad-supported video on-demand revenues up 14.3 percent.

The AA and WARC expect continued strong growth in 2022, predicting total ad spend will be up a further 7.2 percent next year. 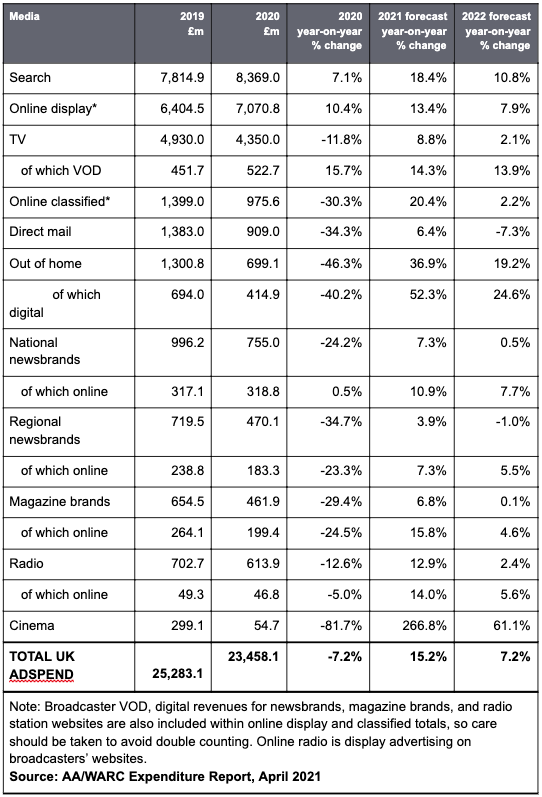 As was the case last year, the IPA Bellwether Report’s forecast for the year ahead is much more conservative than others. The IPA’s figures for the UK market find a 15.7 percent drop in ad spend last year, with just 3.5 percent growth expected this year. This means the IPA doesn’t believe the UK ad market will see anything like a complete recovery this year. The recovery is predicted to pick up pace in 2022, with ad spend growth pegged at 6.9 percent.

Even these figures could be optimistic, according to the IPA. The trade body says that the emergence of new vaccine-resistant strains of the virus and the delay of vaccine rollouts in other countries that act as key trading partners to the UK, such as those in continental Europe, could lead to lower than expected ad spend.

Like the IPA, Dentsu’s forecast for the year ahead is somewhat less positive than others – though this could be due to the fact that it was released back in January. With this lower level of projected growth Dentsu said it wasn’t likely that total ad spend would return to pre-pandemic levels until 2022, when growth is predicted to climb to 6.9 percent.

Dentsu expects that the return of major sports events will help TV return to growth this year, predicted to increase by 1.7 percent. Digital video meanwhile is expected to grow by 10.8 percent, as part of a larger trend of growth in digital channels. 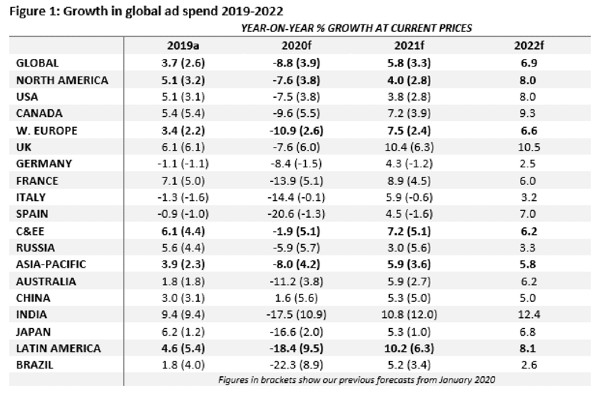