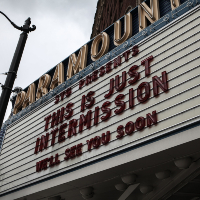 The COVID-19 pandemic could cost the global ad-funded entertainment industry over $137 billion in lost growth over the next five years according to research from Ampere Analysis, a media analyst firm. The entertainment industry as a whole, including paid services, is projected to lose over $160 billion due to the outbreak. But some forms of paid entertainment, including subscription video on-demand (SVOD), will see a net benefit from the pandemic.

Unsurprisingly, the majority of the loss is attributed to this year and next, during the pandemic and at the start of the economic downturn. But Ampere predicts substantial losses beyond 2021 too, as economies take time to recover. In 2024, Ampere forecasts a $19.9 billion loss of growth overall, with $16.5 billion attributed to lost advertising revenues. 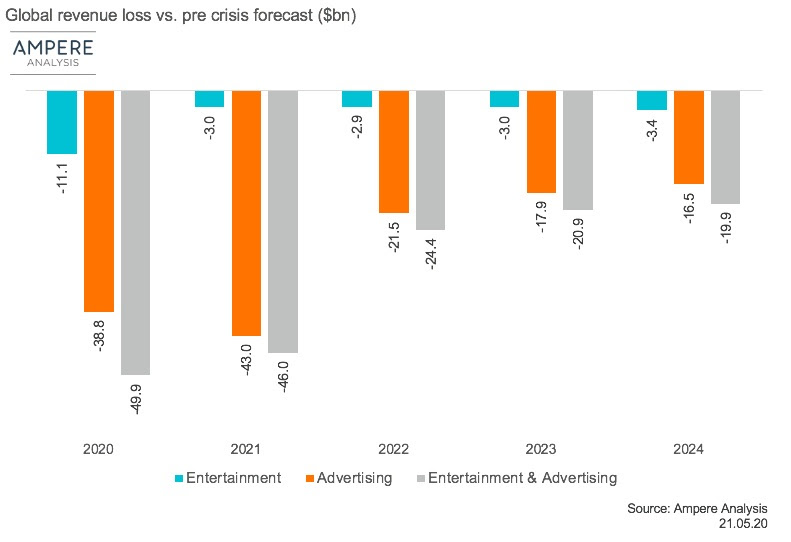 Subscription over-the-top (OTT) services meanwhile are predicted to see higher growth as a result of COVID-19. Ampere forecasts that growth will be 12 percent higher for SVOD services than had previously been expected.

In the immediate term, SVOD services are seeing a boost as consumers are stuck indoors, seeking out entertainment. Ampere says some of these gains will be reversed once lockdowns around the world are lifted. But adoption of SVOD services had been rising anyway, and Ampere says the pandemic will have an overall effect of accelerating this trend, even once consumers are spending less time at home.

“Yes, there will likely be a temporary post-lockdown backlash,” said Ampere research director Guy Bisson. “But key to the longer term prospects is the acceleration of consumer behavioural change which will benefit streamers.”

Not all paid entertainment will fair so well. Proportional to their size, the theatrical and physical video (DVD sales) sectors will be hardest hit. The theatrical sector is expected to see 11 percent lower growth due to COVID-19, while physical video will see growth fall by 20 percent.

Bisson said that damage to the theatrical sector can have knock on effects for ad-supported entertainment too. “The interconnected nature of the entertainment value chain means that will have a number of effects in other areas of the value chain…some of which will not be fully felt for several years to come.” 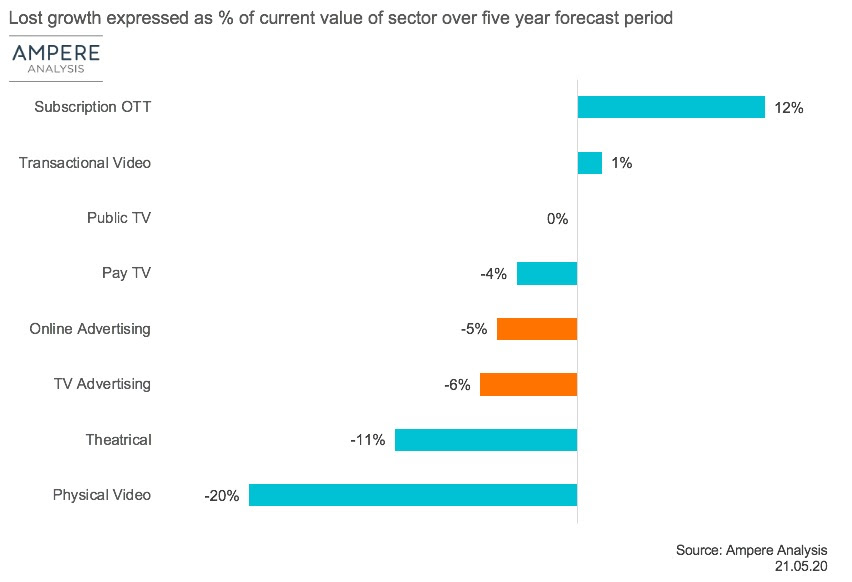 For example, films which were due to release during the lockdown are being postponed until social distancing measures are relaxed. As a result, we’ll see a glut of films vying for release windows next year. This could ultimately lead to a slowdown in film production that impacts content acquisition and distribution for ad-supported services further down the line.