GroupM’s ‘The State of Video 2017’ report released today doesn’t forecast the doom and gloom for linear TV that some are predicting. With TV making up 60 percent of the world’s traditional media spend, and still rising, GroupM says that TV is seen by many advertisers as essential for brand building and still represents “the peak of consumer engagement”. However, TV is still facing a number of serious challenges GroupM have set out some of its concerns about its future as an advertising medium.

The decline of TV audiences are often overstated, with much of the audience of linear having switched to digital platforms instead. But traditional TV viewing is falling as younger generations turn away from linear – GenY viewership has fallen by about 4.5 percent annually in the UK and US, and for GenZ the figure is close to 9 percent. GroupM finds that aging does not increase people’s viewing like it used to, and predicts that aging GenY and GenZ audiences will erode viewing at a pace of one percentage point a year over the next decade. 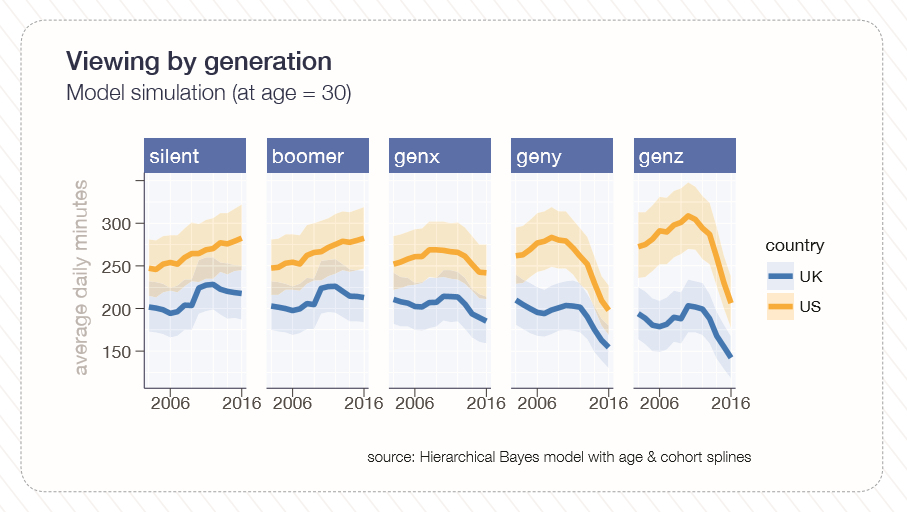 Meanwhile rights costs are rising fast, especially for sports, where high loyalty and engagement ratings have seen investments in rights and ad dollars spent on sports rise quickly. But even with sports, GroupM says younger generations aren’t as attracted as older groups, and sports in the future might not guarantee the same huge audiences they do today. Continued audience loss and fragmentation could make it impossible to sufficiently monetise content for linear broadcasters to cover its growing cost.

The threat of the digital giants

Traditional broadcasters will struggle to compete for audiences and programming with the likes of Netflix and Amazon, whose economic model is currently based solely on growth rather than profitability. Netflix and Amazon are estimated to spend around $10 billion per year on content acquisition and creation, and offer a tempting opposition to the emerging ‘skinny bundles’ of limited channels and networks, especially to viewers not interested in sports. “If you are a sports fan and impatient, it is complex and expensive to get everything you want,” says the report, “If you are neither, it is easy and cheap – go to Netflix or Amazon.” 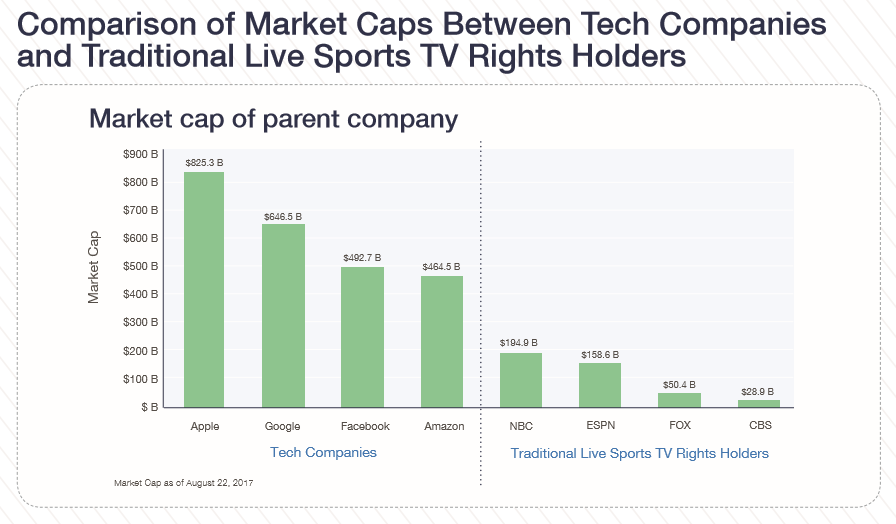 GroupM say that no national media company has the resources to compete with these players on a global basis, and that it won’t be a surprise if Amazon Prime and Netflix come to form the anchor of the new entertainment landscape.

The long tail of TV, the lowly viewed niche channels that come with pay-TV packages, faces threats on two fronts. The cheap inventory on these channels has helped mitigate TV ad inflation in the past, but the emergence of on-demand video is making TV’s second rate ad inventory on these niche channels hard to sell. The report says these channels in the past held a sort of quasi-on-demand status, offering a certain type of content at any time of day, a status it’s losing in competition with actual on-demand.

Partly as a result of this, networks and broadcaster themselves are now offering stripped-back ‘skinny bundles’, free of these long tail channels, and as these bundles become more mainstream, the economics of long-tail channels and programmes will come under even more pressure.

Viewing measurement has not kept pace with changes in viewing habits, with a lot of content now watched on poorly measured or completely unmeasured screens. Even where there is measurement viewing standards vary, making total measurements of a show’s audience inaccurate and making it harder to monetise to its full value. GroupM says that the loss of linear audiences is largely an illusion, but until a holistic method of measurement with common standards across platforms and devices exists, TV shows will remain undervalued. What is necessary according to the report is “a universal, any-screen, respondent-level method with automatic content recognition.”

With SVOD services like Netflix giving audiences ad-free viewing, and short-form online content being supported by short and often skippable ads, audiences are becoming intolerant of the long ad breaks featured on linear TV. Channels are now having to experiment with shorter, less intrusive breaks in the hopes that linear audiences will stabilise or grow, and that advertisers would be willing to pay a higher premium for this more effective inventory. The report advises that TV must make its advertising more relevant, making it more native to its environment and more audience-friendly.

Time shifting only makes up a small proportion of TV hours, but can have a sizeable impact on the commercial audience in the right context thanks to the ability on time-shifted TV for viewers to fast-forward through ad breaks. As the report says, if ads are skipped during primetime, in prime content, by a prime audience, the inventory on the programme becomes a lot less valuable.

Legacy broadcasters are often constrained by old trading conventions, where buyers would plan around purchasing a portion of airtime. GroupM say these conventions are unsuited to the modern market, based around shorter planning cycles and adaptive management, making TV a less attractive platform to advertise on.