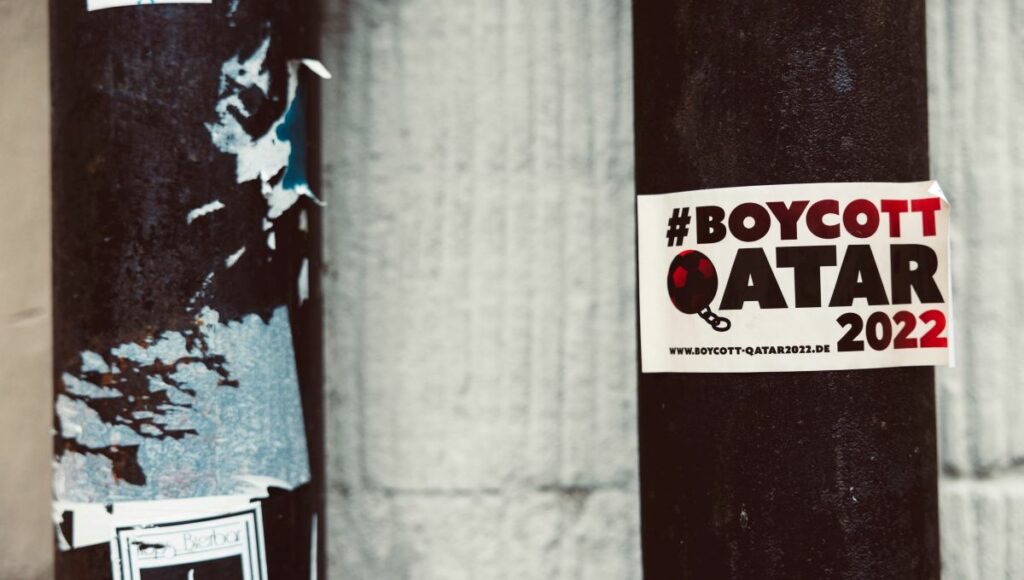 With the controversial Qatar World Cup in full swing, it seems the ethical questions being asked of brands and sponsors have been kicked into touch. While Hummel produced a “sponsor-less” kit for the Danish team, and Virgin Atlantic flew the England squad to Doha in a gay pride-themed plane, sponsor spend will still exceed $1 billion, according to figures from GlobalData.

“I’ve seen very little evidence of anyone actually fully boycotting the World Cup,” observes Amar Singh, VP of Content and Communications at sport marketing agency MKTG Sports + Entertainment. “If that’s happening, not many people know about it, that’s for sure.” The billion-dollar question is whether brands have a responsibility to bow out of the event, whose host nation has overseen the deaths of 6,500 migrant workers and imposes the death penalty for homosexuality.

“Make no mistake, FIFA awarding the World Cup to Qatar is nothing short of an atrocity,” states Ged Colleypriest, Founder of Underdog Sports Marketing. “If there is a responsibility, it’s on FIFA sponsors, rather than brands as a whole, to make a stand. Had McDonald’s or VISA withdrawn their sponsorship it would’ve had a large impact. I’m not so sure that anyone cares what a random brand has to say about it.”

The reason those sponsors could make a difference is also the reason they don’t; as advertising giants they are basically bulletproof in terms of their reputation. Coca-Cola has been a FIFA partner since 1974 and is estimated to spend over $200 million at this year’s tournament. Last month the company sponsored climate conference COP27, despite being labelled the world’s top polluter by environmental groups. And if the UN can turn a blind eye, consumers won’t be switching to Pepsi anytime soon.

“Adidas is a slightly different proposition,” notes Underdog’s Colleypriest. “They have clearly been concerned about their brand image.” In November the sports brand ditched Kanye West over his antisemitic posts on social media, and its Portland offices were vandalised a couple of days after the tournament kicked off. “But I fully expect them to walk away with minimal collateral damage,” says Colleypriest. “When the tournament finishes, the attention will be elsewhere.”

That certainly seems to be what brands are counting on; the tournament ultimately sweeping people up – and the moral issues away. “I think an awful lot of people are hoping that people forget about the controversies, and the perceived hypocrisies,” comments MKTG’s Singh. To that end, much of the messaging around the World Cup has avoided references to the host nation. “You’re seeing a lot more imagery around the nostalgia of the tournament, the viewing occasion and even the festive season,” says Singh. “People are trying to shift their focus away from Qatar.”

Indeed, the viewing occasion remains the most important factor for advertisers looking to reach a global audience of 3.5-4 billion viewers. “There is an argument to be made that wherever the World Cup is, 95 percent of the uplift that a brand is going to get is purely based on the delivery of football matches on TV,” remarks Singh. “Whether there was a World Cup in Qatar or Timbuktu, that’s still the case.”

This also raises the possibility of advertising around the World Cup in a way that is arguably politically neutral. “Does buying a spot in ITV’s coverage endorse a World Cup in Qatar? I’m not sure it does,” says Colleypriest. “ITV don’t choose where the World Cup takes place, that blame lies with FIFA. The UK TV broadcasters have been more critical of the host venue than I anticipated. So if you’re supporting their coverage I don’t believe you’re contributing to the Qatari sportswashing agenda.”

ITV’s ad revenues are expected to be flat in Q4 – an unlikely outcome for a World Cup quarter – but the extent to which this is down to brands avoiding FIFA is unclear, given the shrinking state of TV budgets and an ongoing cost-of-living crisis. “And from an advertising perspective, this World Cup is an outlier, taking place in the lead up to Christmas,” adds Colleypriest. “So there is another major marketing vehicle muddying the waters.”

“Anecdotally, I’ve heard publishers and broadcasters say that they’ve struggled to attract the same level of interest amongst brands for their World Cup offerings,” he continues. “The reason for this has been the toxicity of the tournament.” All these factors throw doubt over the notion that the event represents an open goal for advertisers. “If there ever was a World Cup which wasn’t too big a marketing opportunity to miss, this is it.”

As a result, many marketers have their sights set on the next World Cup, when the games will be shared between Canada, Mexico, and the US. “A lot of brands are hoping to ride this one out,” says Singh. “They are going to be saving a lot of their best ideas, their most amplified campaigns, for 2026.” But looking beyond that, the potential for a similarly corrupt World Cup remains high – not least because FIFA President Gianni Infantino is running unopposed in the next election.

“In some ways, things haven’t changed that much at FIFA,” posits Singh. “However, there will be a lot of people looking closely at FIFA and expecting more scrutiny over their decision-making.” At the end of the day, it is FIFA that put brands, players and fans in this position – though given the general rise in player activism and socially conscious branding, it can’t help but feel disappointing that the most substantial action was taken by the comedian Joe Lycett, who “shredded” £10,000 in protest at David Beckham’s ambassadorship deal with Qatar.

One brand that has taken a stand of sorts is BrewDog, the pub chain notorious for its exercises in wokewashing. The company’s “anti-sponsorship” campaign involves giving profits from one of its lagers to human rights charities; a move deemed disingenuous by groups who pointed out that BrewDog is still showing the tournament in its pubs, has deals with distributors in Qatar, and had its business practices and treatment of employees blasted by whistle-blowers.

“It’s not a meaningful protest in any particular way,” argues Singh. “It’s as hollow as an empty pint glass; a great example of post-truth purpose marketing.” Colleypriest agrees that the campaign marks a play for publicity rather than political impact. “I’m firmly of the opinion that BrewDog knew what they were doing from minute one,” he explains. “Create a backlash which will create more noise, all of which will keep the BrewDog name on the tip of our tongues and they’ll sell more beer.” For brands looking to make meaningful statements around the World Cup, the bar appears to be low.