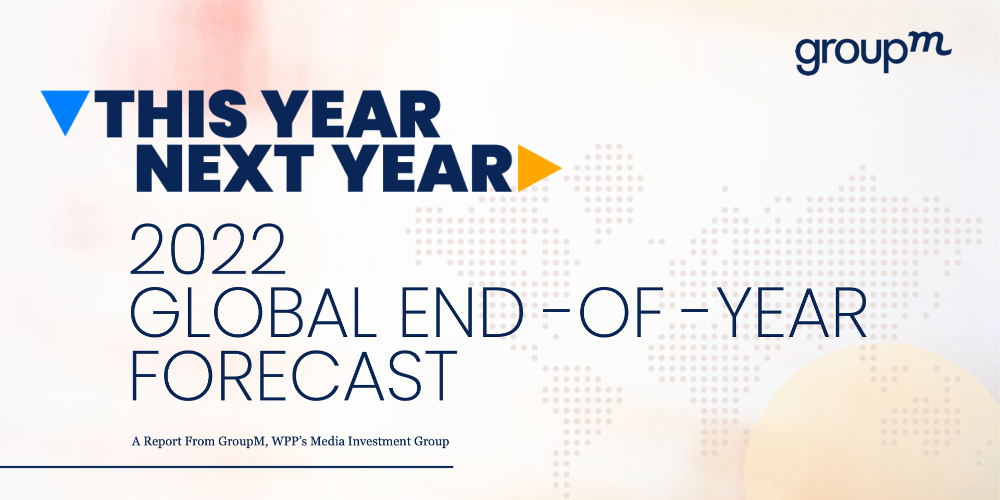 WPP’s media arm GroupM has revised down its global advertising growth expectations for this year and next year, in its appropriately titled This Year, Next Year report. GroupM expects global growth of 6.5 percent this year, excluding US political advertising, a significant drop from its earlier forecast back in June of 8.4 percent. Meanwhile growth next year is expected to reach 5.9 percent, down half a percentage point from its June forecast of 6.4 percent.

But this downgrade doesn’t represent a wholesale reduction in advertisers’ budgets. Rather, it stems from declines in specific markets and specific channels.

Reduced advertising spend in China, which is still heavily affected by the country’s strict zero-COVID policy, has had a big impact. Excluding China, global growth this year is forecasted to reach 8.1 percent, which is just a 0.3 percentage points drop from June’s report.

Pullbacks in TV advertising in select markets have also contributed. Germany, France, and the UK all downgraded TV growth from positive in GroupM’s June forecast to negative in today’s end-of-year forecast.

Overall however, GroupM maintains that overall macroeconomic conditions aren’t as negative for the advertising industry as some may believe.

Large advertisers are still voicing caution over inflation and cost of living crises in different markets. But advertisers’ own revenues have been resilient, as rising costs have been passed on to consumers, but sales have remained strong.

That’s not, of course, to say there aren’t any headwinds facing the industry. Digital endemic brands’ ad spend is being restrained by rising costs of capital and a tighter venture capital market. And the outlook for major advertising markets is “mixed”, with the UK for example currently expected to see a 0.6 percent drop in GDP next year. But overall, there are still plenty of positives for the industry to hold on to.

As mentioned above, TV spend has been reduced in some major markets this year, as advertisers have pared back TV budgets.

And indeed, GroupM suggests that TV in the next few years will have to face up to a much-discussed new reality, as traditional TV’s reach continues to fall.

GroupM painted China as a potential template. In 2021, linear TV saw average reach for all day parts fall to 46 percent, limiting its ability to fulfil marketers’ reach-based goals. And as brands have struggled to reach audiences on TV, “the need to appear next to professional content faded and marketers embraced social commerce sites offering millions of potential brand ambassadors all creating short-form videos”, according to GroupM.

This in turn has driven more focus on personalisation and performance. GroupM says that “the vast majority of advertising in China has a performance, rather than a brand-building goal”. And marketers have begun to view metrics like likes, reposts, and direct sales as partial substitutes for reach and frequency.

This pattern is beginning to emerge in other markets, including the US. By 2025, GroupM predicts all pay TV providers will reach fewer than half of all homes in the US.

But as linear reach drops, growth in connected TV advertising is expected to more-than make up the difference. CTV, alongside retail media, is expected to be one of the major growth drivers in 2023. And indeed for all of the next five years, GroupM expects total TV advertising growth to be positive, between 1.1 and 2.7 percent each year.