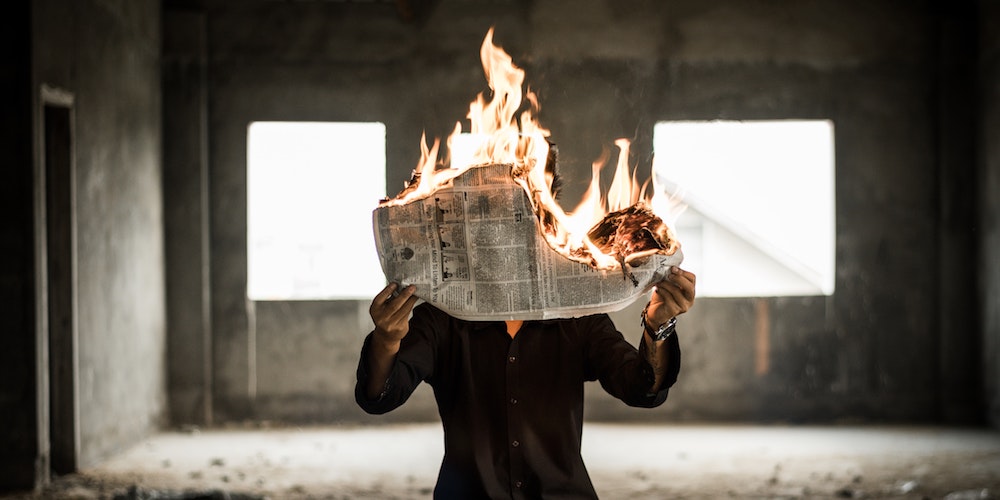 A common complaint against programatic advertising is that marketers do not necessarily know where their ad spend is going. This not only means brands and agencies could be accidentally funding harmful content, but also defunding valuable journalism – all in the name of brand safety.

A CHEQ report in 2019 found that more than half the daily output of news reports were incorrectly blocked by keyword blacklists – attempts by advertisers to avoid having their brands appear alongside negative content. And that was before Covid and the war in Ukraine came to dominate the news cycle, adding further fuel to the keyword bonfire.

As well as robbing respected publishers of essential advertising dollars, this has the more insidious effect of disinsentivising the kind of serious journalism that informs a healthy democracy.

But continued shortfalls suggest marketers are not putting their money where their mouth is, and confusion persists as to how brands can simultaneously benefit the news ecosystem and their own business.

The notion of brand safety is built on advertising consensus and industry standards around avoiding genuinely harmful content, whose topics include firearms and illegal drug use.

“It’s generally accepted that this is good practice to identify and block content you don’t want to be around,” says Ben Pheloung, General Manager at Mantis, a brand safety platform built by British publisher Reach. “The struggle with it comes when the technologies aren’t quite as precise as they could be.”

Keyword blocklists act as a brute-force way of catching those terms wherever they appear, even in benign contexts. Pheloung uses the example of blocking words like “crash” or “bomb”, where you accidentally catch stories about Serena Williams “crashing out” of Wimbledon, or a “bombshell” entering Love Island – not exactly hard news, but hardly unsafe for most companies to appear alongside, and crucially the most popular type of content for online readers.

More dangerously, exclusions presumably intended to catch pornography have rendered LGBTQ+ content effectively unmonetisable. The CHEQ report revealed that 73 percent of LGBTQ+ stories were blocked from serving ads by virtue of mentioning “lesbian” or “bisexual” – including positive news about the success of Killing Eve and women’s football.

Attached to this is the issue of brand suitability, where certain companies avoid “social topics” such as Black Lives Matter and trans rights. While one can see the business logic in a motoring brand not wanting to appear against climate change, the story is the same; last year Media Bounty and CHEQ found that 70 percent of safe climate change coverage is unmonetisable through advertising.

Pheloung argues that the quantitive nature of blocklists ends up punishing publishers for the quality and volume of their output. “The more content they write, and the more in-depth content they publish, the more chance they have of falling afoul of these kind of blocks,” he notes.

Once you throw Covid onto those blocklists, “you really throw the baby out with the bathwater,” says Pheloung. Efforts to avoid appearing alongside death tolls inadvertently rule out stories about Captain Tom or vaccination rollouts.

“That meant a big agency suddenly had their ability to communicate with their consumers slashed,” notes Pheloung, “because their ability to actually find impressions that were suitable for their campaigns just suddenly starts to evaporate.”

And that money evaporates with it, disappearing into the “long tail” of the internet – sites with less policeable content that runs the gamut from low-quality to straight-up fake news.

“We know that a lot of hate misinformation actually comes from the long tail of the internet,” says Harriet Kingaby, co-founder of the Conscious Advertising Network. “Hate misinformation is very lucrative, because it flies through social media platforms quicker than the truth in a lot of cases.”

“In terms of effecting change, it’s very difficult with social media companies because ultimately advertisers have to keep going back to them,” comments Kingaby.

Scott Cunningham, a consultant for the Local Media Consortium who manages the Local News Advertising Inclusion List, adds that as long as there are brands who “don’t care if they end up on some weird commenting section,” that content is going to be sustainable.

“And so the question becomes, are we okay with that?” he continues. “And I think what’s happening is, we have to be, but we also need to make sure that we’re offering up alternative channels in the ease of use. That’s where the journalism comes in.”

Cunningham explains that journalism has inherently been defined as brand safe because it is professionally produced content, as opposed to the user-generated content that populates social channels.

“And at the end of the day, you’re going to roll the dice and you’re going to get what you get unless you sit there and make the hard work happen for you and you tell the social platforms, I don’t want to be on the channels,” says Cunningham.

“I would encourage brands that are out there to say that I would prefer to spread my spend on known distribution channels – including social but also journalism as a combination – because I think at that point, you’re going to find that audience engagement against their brands will actually grow as well.”

While there is hard work to be done on the part of marketers, technology is on hand to help them understand news content in context. Mantis uses AI from IBM Watson to read an article at the point of publication and provide a precise brand safety analysis – for instance by distinguishing a real-life crime from one that took place in a TV show. “Our motivation there is to free up as much safe inventory in a trustworthy fashion as possible,” says Pheloung.

In Cunningham’s view, there is added business justification for the larger publishers developing tools such as these. “The professionally produced content publishers, entertainment and/or journalism, they’re taking a lot of this tech in-house – and they have every every right and anticipation to be able to monetise it themselves, so the buyers can get better signals out of this themselves, versus some intermediary.”

And similar tech is being developed on the social side, using AI to contextually analyse the dynamic content on news feeds. Working with platforms such as TikTok, Integral Ad Science (IAS) “is expanding brand safety coverage to social in-feed environments,” says Paul Nasse, RVP Agency Partnerships EMEA at IAS. Crucially for social media, that analysis extends to audio and video – for example by determining whether a frame containing an explosion is a terror attack or a festive celebration.

As for advertisers, the guidance is to be bold – both in liberating spending on honest journalism and eliminating it for genuinely harmful content. “Topics like politics and celebrity gossip are areas where brands could definitely benefit from being a little bit braver in their approach,” advises Pheloung.

Meanwhile removing ad spend from misinformation is essential in a programatic landscape. “I think we do have to place particularly programmatic under the microscope and have a really good look at where our advertising is going,” says Kingaby. “Otherwise, we can bet our bottom dollar it’s going to be funding stuff that’s not very nice.”

For Louis Jones, Brand Safety Officer-in-Residence at BSI, there is a “moral imperative” for brands to support a healthy news environment. “Brands certainly have a role to play in this world, particularly as the world becomes a little bit more bipartisan by the day. They have a role to play in supporting news that actually helps people make better and informed decisions.”

“It’s important that we find ways to keep good journalism available at present,” Jones concludes. “Otherwise we have a really lopsided view of what’s actually happening in the world.”