In this week’s Week in Review: The DOJ is set to rejects Google’s offer to break up its ad business, DAZN explores an acquisition of Eleven Sports, and Dentsu cuts its ad spend forecast.

DOJ Set to Reject Google’s Offer to Split Up its Ad Business
The US Department of Justice is preparing to file an antitrust lawsuit against Google within the next few weeks, targeting its dominance of the online advertising market, Bloomberg reported on Thursday.

Reports emerged late last week that Google had offered to split up parts of its ad business into separate entities, though without actually selling any off, in an effort to appease the DOJ.

DAZN in Talks to Buy Eleven Sports
Sport streaming service DAZN is in talks to acquire rival broadcaster Eleven Sports, the Financial Times reported on Wednesday. Details of the discussions were not disclosed. The news follows the collapse of DAZN’s bid for BT Sport, leading to the joint-venture between BT Sport and Warner Bros. Discovery.

Eleven Sports holds key sports rights in Europe, including F1 in Poland and the UEFA Champions League and Premier League in Portugal. The acquisition would provide a significant boost for DAZN, which is still rebuilding following its pandemic-led dent to its finances, which forced it to delay the global rollout of its streaming service.

The business has been aided by the support of its primary financial backer, Sir Len Blavatnik. Following its struggles, DAZN Group received a recapitalisation of $4.3 billion from Blavatnik back in February, funding its continued pricey rights acquisitions.

Dentsu Cuts its Ad Spend Forecast for 2022 to 8.7 Percent
Dentsu has lowered its global ad spend forecast for 2022 down to 8.7 percent, a drop of 0.4 percent since January, as global economic conditions continue to dent the advertising market.

Dentsu’s global chief executive Peter Huijboom remained optimistic, saying that the downgrade is minor given the context. “Even with everything which has happened in recent months, not least the protracted war in Ukraine and its international repercussions, the advertising recovery remains strong on a global scale,” said Hujiboom. “And, despite factors such as inflation putting pressure on household budgets, combined with 2021 being a tough comparative year, we have only marginally revised down our 2022 growth forecast by just 0.4 percentage points.”

Dentsu still predicts a strong year for video – forecasting digital video ad spend growth of 23.4 percent year-on-year. Meanwhile television ad spend growth is expected to sit at 3.6 percent. Within this linear TV is set to grow by 2.0 percent, connected TV (CTV) up by 22.3 percent, and broadcaster video on demand (BVOD) is up by 16.0 percent.

Netflix Picks Microsoft to Build its Ads Product…
Netflix this week announced that it has chosen Microsoft, owner of programmatic ad tech business Xandr, to build its advertising product as it prepares to launch an ad-supported tier. You can read industry reaction to the decision here.

… while Disney Chooses The Trade Desk
Shortly before Netflix’s announcement, Disney announced its own deal with demand-side platform The Trade Desk, which will power programmatic advertising across Hulu, ESPN+, ABC, Freeform, ESPN, National Geographic and FX. Disney+, which has announced its own intentions to launch an ad-supported tier, was not mentioned in the deal, though it could be folded in once it’s released.

IronSource Merges with Gaming Software Giant Unity at $4.4 Billion Valuation
Mobile monetisation platform ironSource has agreed a merger with Unity, one of the world’s most popular gamer creation platforms. The all stock deal, which values ironSource at $4.4 billion, will see ironSource become a wholly owned subsidiary of Unity. Read the full story on VideoWeek.

Twitter Sues Musk for Backtracking on Takeover
Elon Musk’s controversial Twitter takeover took another turn this week when the social media company sued the Tesla CEO for reneging on the deal. Asking a Delaware court to order the buyer to fulfil the $44 billion merger, the complaint accused Musk of believing he can “trash the company, disrupt its operations, destroy stockholder value, and walk away.”

MiQ in Private Equity Investment Talks
MiQ is in talks to secure a majority investment by a private equity firm. The deal would potentially see ECI Partners sell its minority stake in the ad tech company, which could be valued close to $1 billion. Digiday reported that some market observers see the move as a precursor to MiQ being listed publicly when the stock market has recovered.

Index Exchange Partners with Scope3
Index Exchange this week announced a partnership with Scope3, a company which tracks end-to-end carbon emissions in digital media, in order to help media buyers reduce their carbon footprints. Through this partnership, Index will offer Green Media Products (GMP), powered by Scope3, which it says will accurately map, measure, and compensate for the end-to-end emissions in the programmatic ad supply chain.

TikTok Unveils Brand Safety Tool
TikTok introduced a brand safety and suitability tool on Tuesday. The Inventory Filter is designed to give advertisers more control over the content that appears next to their ads. Powered by machine learning, the filter is informed by TikTok policy guidelines, as well as the Global Alliance for Responsible Media (GARM) Brand Safety Floor and Brand Suitability Framework.

France Télévisions to Double OTT Offering
France Télévisions will double its OTT offering on catchup service France.tv. The French public service broadcaster is aiming to draw younger audiences from competitors in the streaming sector, by doubling its number of series, adding 100 films, and increasing investment in shows and documentaries to €20 million. “Our inspiration comes from SVT, the Swedish public television which, since last year, has been reaching more people from its digital platform than on its linear channels,” said France Télévisions president Delphine Ernotte-Cuni.

BBC Studios Marks Record Growth
BBC Studios has filed record growth for 2021/22, exceeding £200 million in profits for the first time. Profits were up by 50 percent year-on-year to reach £226 million, with sales up 30 percent to hit £1.63 billion. The commercial arm of the BBC has investments in a number of production companies, such as Lookout Point, Baby Cow Productions and Clerkenwell Films. The company made 2,400 hours of content worldwide in 2021/22, with content sales accounting for over £400 million, including Doctor Who, Top Gear, Green Planet and This is Going to Hurt.

Netflix Renegotiates Ad-Supported Content Deals
Netflix has entered negotiations with Hollywood studios to license content for its ad-supported tier. The company is reportedly in discussions with Warner Bros., Universal and Sony, including renegotiating deals for older TV shows to contain ads.

CMA Investigates Sport Broadcasting Cartels
The Competition and Markets Authority (CMA) launched on Wednesday a probe into British sport broadcasters’ purchase of freelance services. The CMA said it has “reasonable grounds” to suspect BT, ITV, Sky and IMG Media of violating competition rules. The watchdog is investigating under Section 25 of the Competition Act, which deals with potential cartels.

Sky Deutschland Extends Wimbledon Deal
The All England Tennis Club has extended its agreement allowing Sky Deutschland to show the Wimbledon tournament on the internet and mobile in Germany, Austria and Switzerland. The deal allows Sky customers to view the competition live on Sky Go in addition to the linear TV broadcast. In addition, Sky Deutschland launched a dedicated tennis channel on Thursday.

Morning Brew’s Revenues Reach $36 Million in H1
Business newsletter Morning Brew’s revenues passed $36 million in the first half of the year, with the company on track to post 66 percent revenue growth across the year, Adweek reported this week. The Axel Springer-owned unit has also launched its 10th newsletter, CFO Brew.

UK Government to Introduce New Protections for Digital Journalism
The UK government has amended its upcoming Online Safety bill to better protect against the arbitrary removal of articles from journalists at recognised news outlets when shared on social media platforms. The bill previously would not stop platforms from removing news publishers’ content or making it less visible if they decided to review it for potential breaches of their terms and conditions, even if they eventually found no fault with it. But under the new amendment, Category 1 companies – including the largest and most popular social media platforms – will now be required to ensure recognised news publishers’ articles remain viewable and accessible on their sites even if they are under review by moderators.

Seven in Ten Adults Want Social Platforms to Do More to Tackle Harmful Content
A new study from Ipsos found that 68 percent of UK adults want to see social media platforms do more to tackle racism, misogyny, and homophobia on their platforms – while 38 percent report having seen this sort of harmful content within the past month. Meanwhile 45 percent say they would leave or reduce the amount of time they spend on any platforms which don’t take action.

Evening Standard Posts £14 Million Loss in 2021
London newspaper the Evening Standard posted a £14 million pre-tax loss last year, the fifth consecutive year without a profit. The newspaper has invested in its digital edition, but has nonetheless been hit hard by a reduction in print circulation and ad revenues.

Berenberg Warns of Advertising Recession
Investment bank Berenberg warned this week that it expects an advertising recession is on the horizon, predicting a five percent fall in global media spending in 2023. However Berenberg believes that agencies are likely to fare better than broadcasters and other media companies, thanks in part to their diversification.

New Training Academy Launched by The&Partnership & mSix&Partners
The&Academy, a new apprenticeship scheme for the advertising industry, has been launched by The&Partnership – one of the world’s fastest growing marketing networks, and mSix&Partners – a joint venture media network between The&Partnership and GroupM. Based in Birmingham, The&Academy aims to provide full-time training and work experience to diverse talent who might not otherwise have considered careers in the digital and creative industries.

Buyers are Willing to Pay More for Trusted, Premium Inventory
Research from IAB Europe backs up the notion that advertisers really are willing to pay more for trusted, high quality inventory. Eighty four percent of all buyers said that they are willing to pay a premium price for higher quality, trusted inventory according to IAB Europe’s survey, whilst 92 percent said that they prefer to spend their advertising budget with suppliers that adhere to industry standards.

Madwell Lays Off Ten Percent of Staff
Indie agency Madwell has laid off ten percent of its staff, AdAge reported this week, due to “shifting economic realities and client budgets”. Around 15 staff were laid off in total. 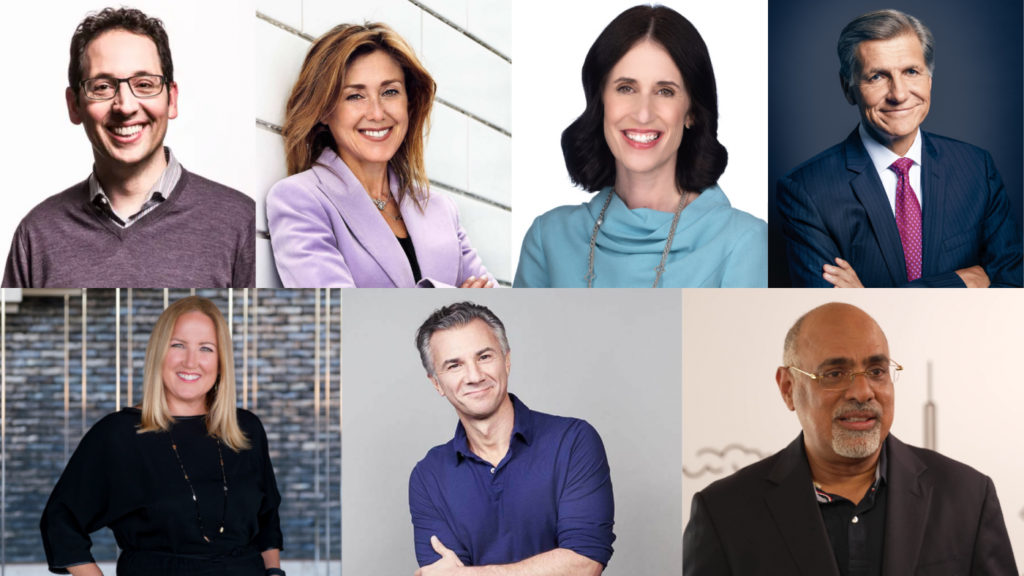 Can the Christmas Ad Season Sidestep the Cost of Living Crisis? read on VideoWeek

Putting the Biggest Advertising Market on the Path to Net Zero, read on VideoWeek

Netflix has Chosen Microsoft to Build its Ads Business: What Happens Next? read on VideoWeek