Putting the Biggest Advertising Market on the Path to Net Zero

Putting the Biggest Advertising Market on the Path to Net Zero 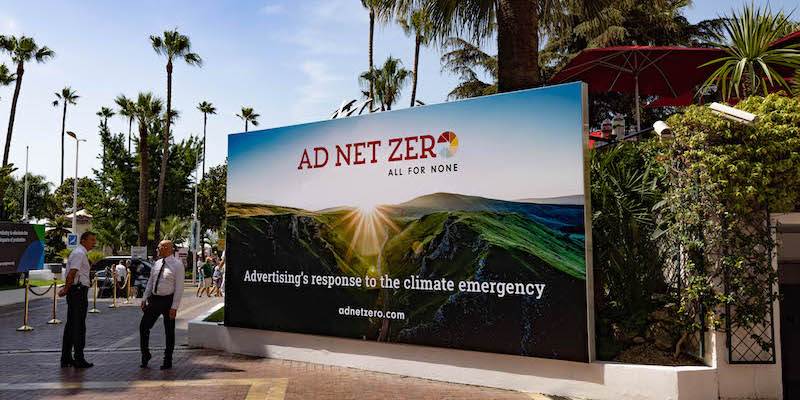 Anyone strolling through Cannes this year may have noticed a billboard for Ad Net Zero – not a movie poster left over from the Film Festival (although ‘All For None’ would make a great Suicide Squad tagline) but a statement of intent by the festival to place sustainability at the top of the agenda.

It was during the Cannes Lions that Ad Net Zero announced its international roll-out, extending its reach to US and EU markets. The programme was launched in 2020 by the Advertising Association, ISBA and the IPA, with the aim of reducing carbon emissions from UK advertising operations to net zero by 2030.

But for any industry-wide effort to be effective, it requires coordination by the entire advertising ecosystem. “Think about the UK as about 5 percent of global advertising spend,” comments Advertising Association CEO Stephen Woodford. “What we do here matters, but obviously it will make much more impact if it rolls out to the rest of the world.”

Ad Net Zero is working with the ‘big six’ agency groups (WPP, Omnicom, Publicis Groupe, Interpublic Group, Dentsu and Havas), as well as Google, Meta, Unilever and Sky, to push the initiative into major international markets. American trade bodies (ANA, 4A’s and IAB) have also joined the efforts to help tackle emissions in the US. “We’ll be putting by far the biggest advertising market in the world on its own pathway to net zero,” says Woodford.

The direction of travel

According to the Advertising Association, Cannes Lions has played a key role in the international roll-out by facilitating the announcement, inviting further supporters and committing to hosting annual progress updates. This raises the question of the sustainability of globally landing en masse at Cannes, considering air travel is the biggest contributor to the industry’s carbon footprint.

“All these things are all about trade-offs,” says Woodford. “The power of Cannes is its convening power. And there are certain moments in time where big things need to happen by getting people together.” He notes that some major airlines offer carbon offsetting programmes, while the pandemic has reduced the amount of business travel generally. “Nobody’s going to go back to flying like they used to,” he adds.

In fact the Advertising Association travelled to Cannes by train this year, and hopes to bring more UK attendees on board ‘The Advertising Express’ for future trips. “I think one of the earliest bits of advice we had from an expert in the field was: Get your house in order,” recalls Woodford. “Rather than go preaching to your clients, you’ve got to take responsibility for the things that you are responsible for.”

That notion of responsibility was brought to the fore at Cannes when Greenpeace stormed the WPP beach in protest at the group’s work with fossil fuel companies. “It’s up to each individual business about the choices they make in terms of the companies they choose,” argues Woodford, adding that companies like Shell and BP are “among the biggest investors in sustainable energy.”

And it’s not just energy providers having to invest in that change. Car companies are placing some 70 percent of their ad spend behind hybrid or electric vehicles, which account for around 12 percent of cars actually sold. “The advertising investment is way ahead of the number of sales,” confirms Woodford. He expects that ad spend to drive consumers towards more sustainable products and services across different markets. “Look at the McPlant burger,” he says. “Who would have thought five years ago that McDonald’s would be putting so much money behind a plant-based burger?”

A range of ingredients go into that campaign, and Ad Net Zero is focused on ensuring the sustainability of the end-to-end process, from advertising production to media buying. “It’s actually a very interdependent ecosystem,” explains Woodford. “You can’t just change one part of the system, you have to change the whole system.”

Ad Net Zero asks its members to identify those parts of its supply chain where a more sustainable choice can be made, whether that means switching to sustainable energy provision or using the organisation’s AdGreen tool (modelled on BAFTA’s Albert certification) to measure, manage and reduce a production’s carbon footprint. “Until you start measuring, you can’t hope to reduce the carbon,” states Woodford.

“The global footprint for advertising might be between 30 and 50 million tonnes; that’s a lot of carbon to take out of the atmosphere,” he concludes. “And I think if you look at the corporate commitment, the energy and the ambition that we saw in the UK and now we’re seeing globally, it’s about turning that ambition into everyday action.”