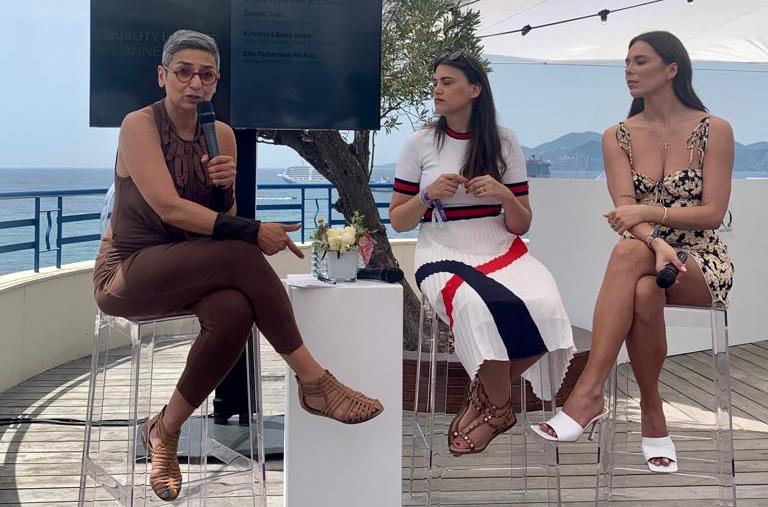 The industry’s most decadent gathering is back after two years with a more Cannes-do attitude towards sustainability. So far this week, the UK’s Ad Net Zero pledge has been rolled out internationally, Greenpeace stormed the WPP beach to protest agencies working with fossil fuel companies, and the sun has been beating everyone into submission. And yet the festival cannot help but feel insulated from the reality of climate change, not least because most views of the natural world are obscured by yachts.

“As we speak right now there is flooding in India and Bangladesh,” says Zainab Salbi, women’s rights activist and co-founder of Daughters For Earth, a new campaign seeking to raise $100 million for women working to protect the planet. Its core aims are the protection and preservation of 50 percent of Earth, and the shift towards regenerative agriculture and renewable energy. Following the Daughters For Earth panel at the Cannes Lions, Salbi tells VideoWeek that women are not only disproportionately affected by climate change, they are also leading efforts on the ground to tackle the planet’s devastation.

“Men tend to be more mobile in their jobs and opportunities, women tend to be more stable,” explains Salbi. “That’s not stereotyping, that’s the reality; women are raising their children, they’re getting their kids to school, so they need more stability. So when floods are happening in Bangladesh, for example, those who are in the communities are majority women, because the men are mostly working somewhere else.” That is why 70-80 percent of those displaced by climate change are women, according to the UN, while agricultural gender inequalities place female farmers at higher risk of hunger during food shortages.

“No one is talking about us”

At the same time, women around the world are fighting for the environment without acknowledgement or compensation for their work. Daughters For Earth has helped support women in Ecuador who saved vast swathes of Amazon rainforest from being sold by the government to the oil industry. “Indigenous women came together, rolled up their sleeves and helped protect 7 million acres,” says Salbi. “Women are leading efforts to protect and preserve Earth, and no one is talking about their efforts.” In terms of funding, women get two cents of every dollar invested in climate solutions. “We are here to change that story,” she adds.

That is where media and advertising come in. “I worked in war zones for 20 years and I wrote many books about women,” notes Salbi. “I was always asking, what is the secret agent for change? What is it that creates change in the public? And after trying everything – educational programmes, economic programmes, training programmes – I realised the secret agent to change is inspiration. You need to tell stories that inspire people, that shows them there is a possibility for positive change and a solution.”

Through the creative output of media and advertising – alongside the industry’s own efforts to clean up its act – the sector has enormous power to raise awareness for the work that needs to be done, as well as the female-led efforts already underway. “We did surveys of women and they’re frustrated; no one is talking about us,” says Salbi. “So I’m appealing from all of my heart, to the community in here to join us and to help us in raising awareness that women are a pivotal part of the solution for the climate.”