Group of Conservative MPs Ask Government to Stop Channel 4 Privatisation
A group of Conservative MPs have written to the UK government to ask them to drop plans to privatise Channel 4. In a letter to Boris Johnson, MPs including former culture secretary Karen Bradley and ex-cabinet minister Damian Green, argued that Channel 4 was “self-sufficient and successful, making no drain on the public purse”.

The MPs appealed to former Tory PM Margaret Thatcher, whose government oversaw the creation of Channel 4. “Margaret Thatcher created Channel 4 as a publicly owned, non-profit public sector broadcaster that would act as an incubator for independent, risk-taking, innovative private sector companies,” said the letter. “She had a vision to level up the broadcasting landscape and she succeeded spectacularly well. We should maintain her legacy, not put it at risk.”

DAZN Reports $1.3 Billion Losses for 2020
Sports streaming specialist DAZN revealed this week that it recorded $1.3 billion in losses in 2020 as a result of the pandemic, which cancelled the majority of live sports events leaving the streamer with little content to broadcast.

The service has weathered the storm, and managed to continue signing major sports rights deals, thanks to continued backing from businessman Len Blavatnik. Just last week Blavatnik agreed a $4.3 billion recapitalisation of the company via his investment company Access Industries.

Nonetheless the news shows the damage done to DAZN during the pandemic. The company has been working to rebuild momentum since live sport has returned in most markets, but took a blow early this year as a hoped-for acquisition of BT Sport fell through.

UK Government Targets Social Platforms with New Laws Targeting “Anonymous Trolls”
The UK government’s Online Safety Bill has been updated to include measures that would legally require social media companies to give users the ability to block anonymous users. The government said it would introduce the measures to protect internet users against “anonymous trolls”.

The updated law, if passed, would also see social media companies obligated to give users more controls over what they see. This is particularly related to content that is not illegal, but that still causes harm, such as the promotion of self-harm and eating disorders.

The bill would require social media companies to provide users with ways to verify their own identity, and then give them the power to block users who have not done the same.

Singtel Appoints Moelis to Explore Amobee Sale
Singtel has appointed investment bank Moelis to explore a potential sale of Amobee. The Singaporean telco had discussed the potential divestiture of its ad tech subsidiary publicly last year. It had launched a strategic review of its non-telco assets in September of last year. Singtel acquired Amobee for $321 million in 2012. Amobee has since acquired 12 companies.

GroupM Announces Unified Programmatic Marketplace in Partnership with Magnite and Pubmatic
GroupM today has announced that it is launching a new unified programmatic marketplace, another initiative from the media buyer to build direct links with supply-side platforms (SSPs). The GroupM Premium Marketplace, which will provide buyers with direct access to inventory from SSPs Pubmatic and Magnite, will support connected TV, video, and display inventory. Read the full story on VideoWeek.

Ten Percent of Gaming User Acquisition Budgets Shifts Away from iOS, Finds AppsFlyer
The share of user acquisition budgets spent by gaming apps on iOS has declined from 38 percent in 2020 to 28 percent in 2021, finds research by AppsFlyer. The shift comes following privacy changes that Apple made to its operating system. The report also finds that there was a 22 percent increase in gaming app installs on Android in 2021.

Irish Watchdog Nears Decision on Facebook EU-US Data Transfers
Ireland’s Data Protection Commission (DPC) is reportedly nearing a decision on Facebook’s data transfers between the EU and the US. The EU’s highest court ruled in 2020 that a transfer agreement was invalid, citing surveillance concerns. Facebook says a suspension of data transfer would be catastrophic for its business.

Google Introduces Checks To Automatically Look for App Privacy Compliance
Google’s in-house incubator Area 120 has launched a new tool for mobile app developers on Android and iOS called Checks. The tool uses AI to automatically identify possible privacy and compliance issues. The freemium solution will provide developers with a report that has actionable insights about how to address the problems found.

Good-Loop Looks to Expand Into US with $6.1 Million Investment
Advertising-for-good platform Good-Loop has raised $6.1 million in funding. The funding round was led by New York-based investment fund, Quaestus Capital Management. The company intends to expand internationally, with offices in Chicago and New York.

Outside of advertising, Discovery said it’s seeing steady uptake of its Discovery+ streaming service, with paid subscriptions up two million in Q4 to 22 million. The broadcaster also revealed that it expects its acquisition of AT&T’s media unit WarnerMedia to complete before the Upfronts season.

Tegna Acquired By Standard General for $5.4 Billion
US TV station operator Tegna will be acquired by Standard General for $5.4 billion in cash. Tegna operates 64 news brands in 51 U.S. markets, along with networks, including True Crime Network and Quest. The company also has an advertising network, Premion, that places ads beside long-form and live streaming content across networks.

Roku Introduces Watermark to Protect Against Ad Spoofing
Roku has announced the introduction of an Advertising Watermark, designed to ensure the authenticity of videos ads that originate from the Roku platform. The watermark works by integrating with Roku’s operating system to verify publisher ad requests and impressions and let advertisers know they are coming from genuine users.

FuboTV Reports Record Annual Revenue
Sports-first streamer FuboTV has reported record annual revenues It reported.$638 million revenue in 2021, which includes the impact of the $1 million acquisition of Molotov in December 2021. In 2022 the streamer says it expects to generate over $1 billion in revenues. FuboTV finished 2021 with 1.13 million paid subscribers, up 106 percent from the year before.

Disney+ Will Overtake Netflix in 2028, Says Digital TV Research
Disney+ will overtake Netflix in terms of subscriber numbers in 2028, according to Digital TV Research. It predicts that Disney+ will add 146 million subscribers between 2021 and 2027 to take its total to 276 million, while in the same period Netflix will add 60 million subscribers. It also finds that the total number of SVOD service subscriptions rise by 550 million between 2021 and 2027 to reach 1.75 billion.

AMC, Discovery, TelevisaUnivision, WarnerMedia Select Canoe for Addressable TV Ads
US broadcasters, AMC Networks, Discovery, TelevisaUnivision and WarnerMedia, have announced that they have selected Canoe Ventures to enable them in furthering addressable television advertising. Canoe has signed separate, multi-year agreements with each broadcaster.

Viaplay Becomes Exclusive Home For DreamWorks Animation TV Series
NENT’s Viaplay is to become the exclusive streaming home for new Dreamworks Animation TV series in all five of the Nordic countries (Sweden, Denmark, Norway, Finland, Iceland), as well as the Netherlands and Poland. A multi-year content deal between NBCUniversal Global Distribution and Viaplay means the streamer will be able to exclusively broadcast new animation series based on popular DreamWorks franchises, such as Madagascar and The Croods.

The Week For Publishers

Facebook Reels Rolls Out Globally
Facebook Reels, Meta’s short-for video format which started on Instagram and was carried across to the Facebook platform last year, has now launched globally. Alongside the expansion Facebook announced it is launching overlay ads for the format, starting with banner and sticker ads. These ads will initially be available for creators in the US, Canada and Mexico who are part of Facebook’s in-stream ads programme, but will later be expanded to all markets. 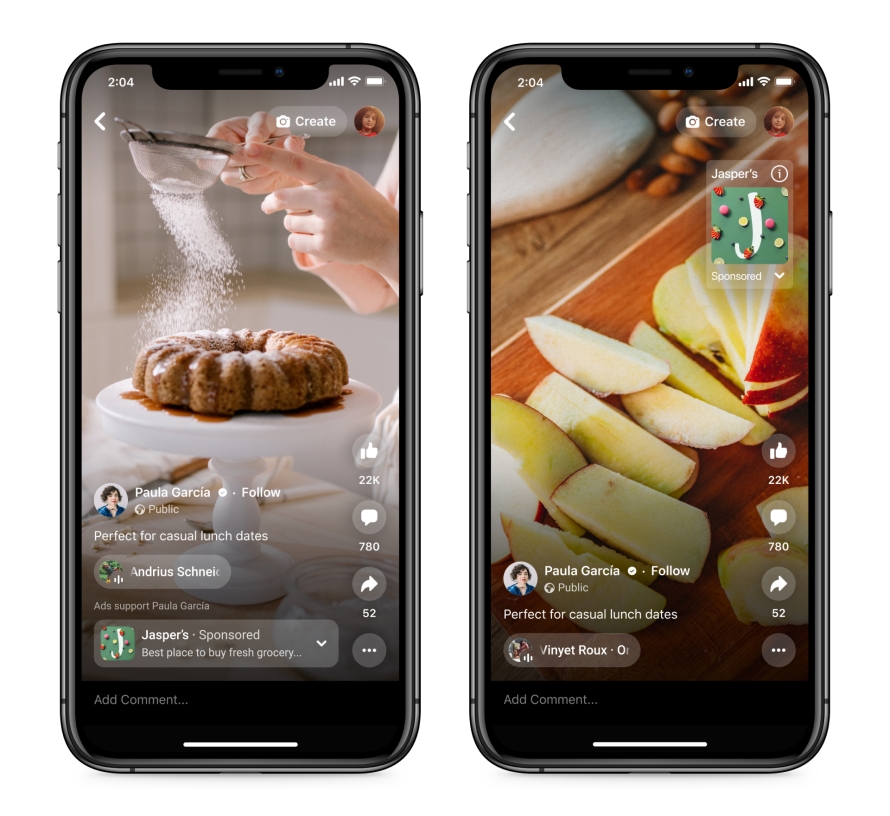 Vox Completes Acquisition of Group Nine Media
Vox Media this week completed its acquisition of fellow digital native Group Nine Media, adding publications including Thrillist, PopSugar, and NowThis to its stable. “This combination will accelerate our growth and ability to delight and inform people wherever they choose to watch, listen and read,” said Jim Bankoff, Vox’s CEO, chair, and co-founder.

YouTube Details Plans to Tackle Disinformation
YouTube’s chief product officer Neal Mohan detailed the platform’s strategy for tackling misinformation in a blog post this week, saying that YouTube’s current priorities are catching new misinformation before it goes viral, reducing sharing of misinformation videos off-platform, and ramping up efforts in markets where its misinformation tools are weaker.

Agency New Business Returns to Pre-Pandemic Levels
Agency new business returned to pre-pandemic levels in 2021 after a dip in 2020, according to agency-client intermediary AAR. AAR’s New Business Pulse reported that overall new appointments rose 46.1 percent in 2021, driven in large part by new entrants, according to Campaign.

ANA Looks for Nielsen Alternatives
The Association of National Advertisers (ANA), a US advertiser trade group, is preparing to issue a request for proposals to explore alternatives to Nielsen for panel-based TV measurement. Kantar is expected to be one of those invited, according to AdAge.

Starcom and Channel 4 Launch New Episodes of Brave Stories Series
Media agency Starcom and Channel 4 have collaborated to produce a six-part short film series titled Brave Stories, and this week released two new episodes of the series. The series encourages people who identify as coming from diverse backgrounds or marginalised communities to open up about their personal experiences of working in media.

Innocent TV Ad Banned for Greenwashing
Drinks brand Innocent has had a TV ad banned by the Advertising Standards Authority (ASA) for allegedly implying that Innocent smoothies are good for the planet. The ASA asked for evidence from Innocent that buying Innocent drinks constitutes a positive choice for the planet, and says it was not satisfied with the evidence.

TfL Junk Food Ad Ban Results in Drop in Unhealthy Food Purchases
A ban on junk food ads imposed by Transport for London across its public transport network has resulted in a drop in purchases of unhealthy purchases, according to research from London School of Hygiene & Tropical Medicine.

Chloe Nicholls Joins IAB UK as Head of Ad Tech
Chloe Nicholls has been appointed as the IAB UK’s head of ad tech. She joins from Mediahub where held the role of technology director.

Brands are Flying Blind in CTV – Data Clean Rooms Allow Them to See, read on VideoWeek

Industry Trade Groups Release New Tools to Crack Down on the Unknown Delta, read on VideoWeek

How Can Supply Path Optimisation Serve both Buyers and Sellers? read on VideoWeek