The UK’s Competition and Markets Authority (CMA) has today issued preliminary findings from its mobile ecosystems markets study, arguing that UK users are losing out because of Apple and Google’s duopoly in the mobile space. The CMA has recommended that action will be necessary to correct market imbalances. These could range from measures to allow third-parties to offer more competitive tools within mobile operating systems, to Apple and Google spinning off parts of their businesses.

The CMA launched its market study earlier this year, in a time of heightened focus on the ability Apple and Google have to dictate terms for app developers and other third-party companies operating in the mobile space. The CMA said at the time it had spotted “worrying trends” on mobile, and wanted to investigate whether these trends actually harm consumers.

The initial findings show that they do. “Apple and Google are able to control how online content, such as mobile apps and websites, is provided to users,” says a statement from the CMA. “They can also tilt the playing field towards their own services.”

The CMA is concerned that this is leading to less competition and meaningful choice for customers. “Most people know that Apple and Google are the main players when it comes to choosing a phone,” said Andrea Coscelli, chief executive of the CMA. “But it can be easy to forget that they set all the rules too – from determining which apps are available on their app stores, to making it difficult for us to switch to alternative browsers on our phones. This control can limit innovation and choice, and lead to higher prices – none of which is good news for users.”

The CMA acknowledged the claims made by both Apple and Google, that they have invested significant funds into their respective mobile ecosystems, and so should be able to benefit from those investments. But the competition watchdog said that “both Apple and Google are consistently making substantial profits with high margins, meaning that their prices go well beyond recovering the costs of providing these goods and services,” and said that the high profits suggest consumers are burdened with the costs of weak competition.

The CMA’s full initial findings on all the specific issues and ways in which consumers are harmed are very lengthy – the full report is 445 pages long.

But one particularly interesting aspect is the CMA’s scepticism towards privacy moves made by the mobile ecosystem owners – particularly Apple.

Many in the advertising industry have pointed out that Apple’s privacy moves have benefitted its own business. It’s App Tracking Transparency (ATT) crackdown on the Identifier for Advertisers, for example, has weakened third-party app ad tech offerings. This in turn has funnelled more money into Apple’s own App Store search ads business.

And Apple’s rules around consumer consent for tracking don’t appear to have been equally applied to Apple’s own apps.

“Apple and Google are often in the position of acting in a quasi-regulatory capacity in relation to users’ security, privacy, and online safety. In many cases they opt to make decisions on behalf of consumers,” said the CMA. “However, it is not always clear if these numerous choices – ranging from restrictions on browser functionality to policies that affect targeted advertising – are in all cases made fully in the interests of consumers. For example, in many cases it seems decisions made on the grounds of protecting users’ security and privacy would also serve to give an advantage to first-party apps, or otherwise limit consumer choice.”

“We are concerned that Apple may not be applying the same standards to itself as to third parties, and the design and implementation of the ATT prompt to users may be distorting consumer choices,” added the CMA. “Ultimately this may mean that Apple is able to entrench the position of the App Store as the main way of users discovering apps, may give an advantage to Apple’s own digital advertising services, and could drive app developers to begin charging for previously free, ad-funded apps.”

The CMA noted too that both Apple and Google’s ad businesses have high gross margins – meaning privacy moves which benefit these businesses should be eyed with scepticism. 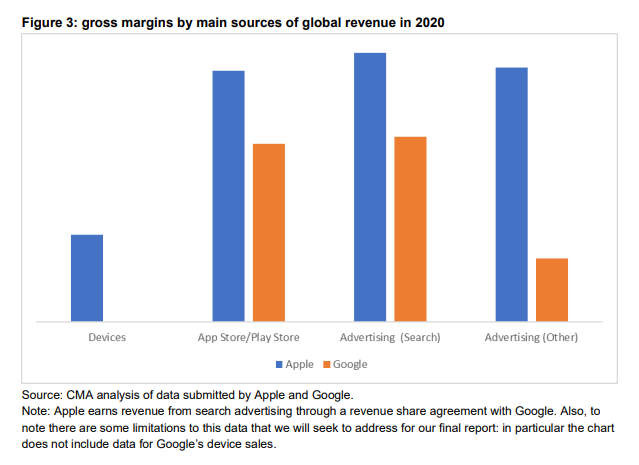 Leave it to the DMU

The CMA has not recommended specific remedies to the issues it has spotted. But it has outlined a variety of measures which could be taken.

The list is quite long, meaning it’s hard to gauge what action, if any, will actually be taken. Separation remedies, which could force Apple and Google to spin off parts of their businesses, are mentioned. But so too are softer measures, such as new rules which would force the two companies to allow more competition in various parts of their mobile ecosystems.

Those in the mobile advertising world will be keen to know if any action will be taken on ATT – and this does seem possible. The CMA explicitly said that one remedy could be “changes to policies that currently reinforce the position of app stores as the primary method of accessing content or which disadvantage apps that are monetised in ways other than through in-app payments (for example Apple’s rules relating to cloud gaming and advertising prompts)”.

But ultimately we won’t see action taken any time soon. The CMA has ultimately recommended that the Digital Markets Unit, a new regulatory regime in the UK which will specifically regulate the largest tech companies, will be best placed to take action.

The DMU will have powers to decide when big tech companies have market-distorting power, and take action as appropriate. But the DMU hasn’t been formally created by the UK government yet – and no timeline has been set for when parliament will legislate.