Last month it was revealed that the BBC has asked the Competition and Markets’ Authority (CMA) to look into Android TV, arguing that the technology could bolster Google’s own suite of products and provide the tech giant with too much control over competitors. But why is the BBC – a public service broadcaster without a commercial remit – so worried about Google’s Android TV?

Google said in May that it now counts over 80 million active devices globally that are using the Android TV operating system. In comparison, CTV device provider Roku reported that it had 55 million active accounts as of Q2 2021 (however, it is noteworthy that Roku continues to lead the way in the US market, the world’s most advanced and lucrative CTV market).

The smart TVs which run on Android TV include Sony, which has been producing devices powered by the operating system since 2015. Other TV manufacturers who use Android TV include Vestel (which produces brands including Hitachi and Toshiba), Panasonic, TCL and Phillips. At the moment both LG and Samsung operate their own smart TV operating systems.

Android TV has been running since 2014 as a successor to Google TV, a commercially unsuccessful smart TV operating system. Its user interface features scrolling carousels of content, as well as portals to take you to specific services (for example, Netflix) and a discover tab.7 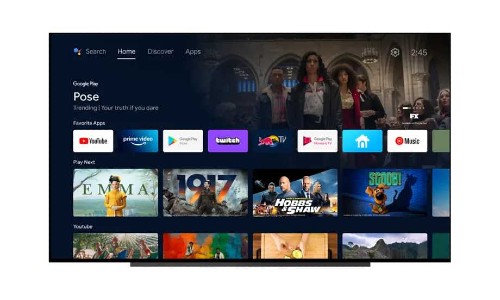 Why is the BBC worried about Android TV?

The BBC made a submission to the CMA earlier this year, asking it to expand the scope of its mobile operating systems study into smart TV operating systems. Special attention was given in the complaint to look specifically at Android TV “given the speed at which Android TV is being deployed and the opportunities it is providing Google for defensive leveraging and leveraging into new sectors”.

In its submission, the BBC expressed concern that Android TV would continue to grow its market share. The broadcaster said that it expected more smart TV manufacturers to adopt the Android TV operating system. The public service broadcaster quotes a report from Mediatique, a media consultancy company, on CTV gateways that stated that tech giants like Google or Apple “may accept low, no or negative margins in supplying the OS to unlock/maintain value in another segment/adjacent market.”

According to the BBC’s own analysis it also projects that by 2023, sixty to eighty percent of new TV sets sold may have an operating system owned by Google, Apple, Meta or Amazon.

The real concern for the BBC here is around how many TV users’ journeys are controlled by Android TV. The response that the BBC put together outlines concerns about self-preferencing by Google.

“Search results will evolve from presenting only the exact title match to presenting an audience searcher with results outside of their expectation,” the BBC’s submission said, “This offers an array of opportunities to Android TV to control users’ onward journeys – opening opportunities to preference services owned and monetised by Google (such as YouTube).”

On regular linear TV EPGs (electronic programme guides), public service broadcasters, namely the BBC, ITV, Channel 4 and Channel 5, are guaranteed prominence. On CTV, there are no such rules, and individual content providers must negotiate with gateway providers like Android TV.

In June, the UK government committed to legislating to protect PSBs’ prominence on CTV platforms in 2022. In its submission to the CMA, the BBC also said the competition body should “add this to the areas it is investigating so as to be in a position to address the issue through a market investigation and/or through the pro-competition regulatory regime.”