UK measurement body BARB has today published data for the first time outlining how total UK video viewing is split between broadcasters, subscription and ad-supported streaming services (SVOD and AVOD services), and video sharing platforms like TikTok and YouTube. Based on BARB’s data, which admittedly isn’t able to capture all viewing for non-broadcaster channels, SVOD and AVOD services only account for 14 percent of total viewing time in the UK, with broadcasters still very much the dominant force.

In September, average broadcaster viewing across linear channels and broadcasters’ on-demand services (BVOD services) was 150 minutes per day per household, with total reach of 94.4 percent of UK audiences. SVOD and AVOD services meanwhile had 75.9 percent reach, but an average of 33 minutes per day. This put them behind video sharing services, which had reach of 79.3 percent, and an average of 39 minutes of viewing per day. 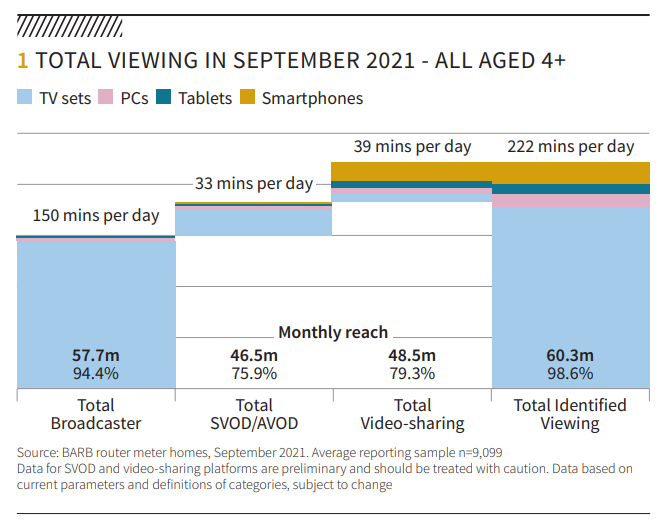 Looking at trends since September 2020, what’s noticeable is that video sharing services appear to have eaten into broadcaster viewing time more than the SVOD/AVOD services. Total broadcaster viewing has fallen from 166 minutes to 150 minutes. Video sharing services meanwhile have risen from 21 minutes to 39 minutes, while SVOD/AVOD services have risen from 25 to 33 minutes. 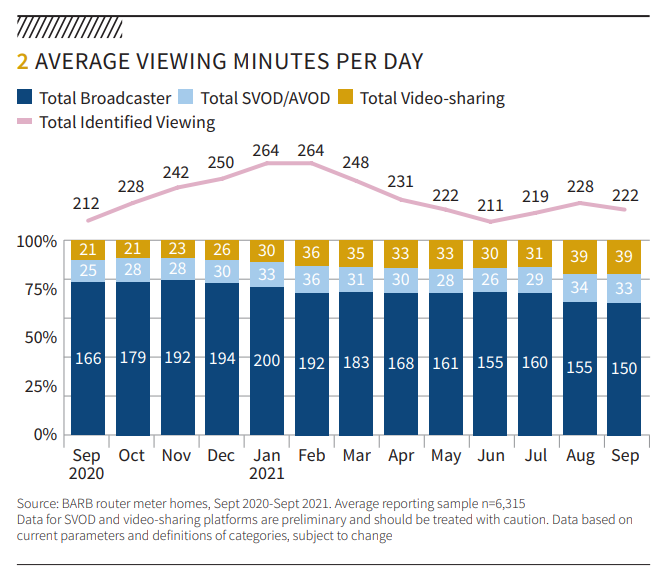 Incidentally, this data also reinforces that competition in video isn’t a zero-sum game, where new entrants can only succeed at the expense of competitors. While broadcaster viewing has declined, this decline (16 minutes) is far smaller than total growth from the other two categories (26 minutes).

The data comes as part of a white paper released by BARB today, as it prepares to start releasing viewing data for SVOD and AVOD services next Monday. BARB has reported on subscription growth in the UK for SVOD services for several years. But previously it hasn’t been able to track viewing since the international streaming services, often reluctant to release specific viewing data, have declined to sign up to work with BARB.

BARB has forged on regardless, and modified its panel-based data collection to capture and record viewing across SVOD and AVOD services. This data will now be folded into its ‘Total Identified Viewing’ stat, which captures all viewing behaviour where BARB can recognise what is being watched, and on which platform and device.

But the solution isn’t perfect. As things stand, BARB can measure SVOD, AVOD, and video sharing services’ viewing across TVs, smartphones, tablets, and PCs. But it can only do this when the device is running through the panellist’s home WiFi router. Broadcaster content however can be identified even when it’s streamed through a mobile data network, or downloaded and watched offline.

Nonetheless, BARB believes its new solution will give significant insight into these newer services, describing the advancement as a “defining moment” for the industry.

The measurement body gave a first taste of this new data, outlining weekly reach on a TV set for what it classifies as the “big four” streaming services – Amazon Prime Video, Netflix, Disney+ and YouTube. This data found that in September this year, Netflix sat above 35 percent, YouTube was around 23 percent, Amazon was around 16 percent, and Disney+ sat around 11 percent. 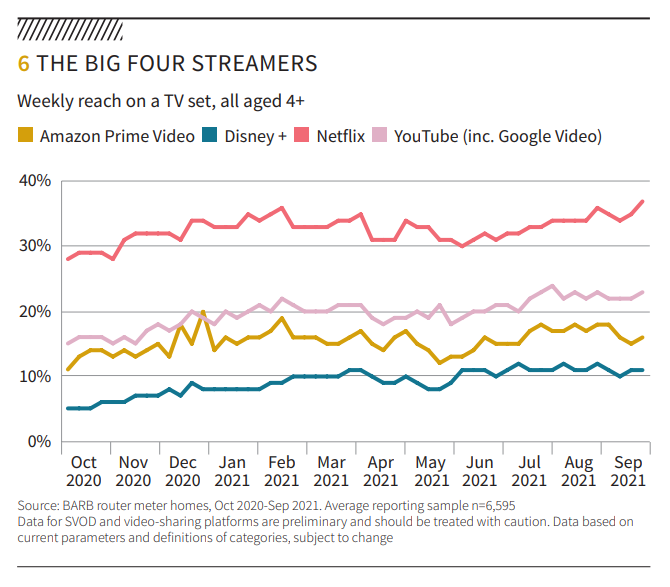 More detailed analysis of audiences – including programme ratings – for Amazon Prime Video, Disney+ and Netflix will be available from Monday. Licensees will also be able to access detailed analysis of who is viewing YouTube/Google Play. This includes when people are viewing and
on which device, although no content ratings will be available other than for broadcasters’ programming that’s distributed on YouTube.