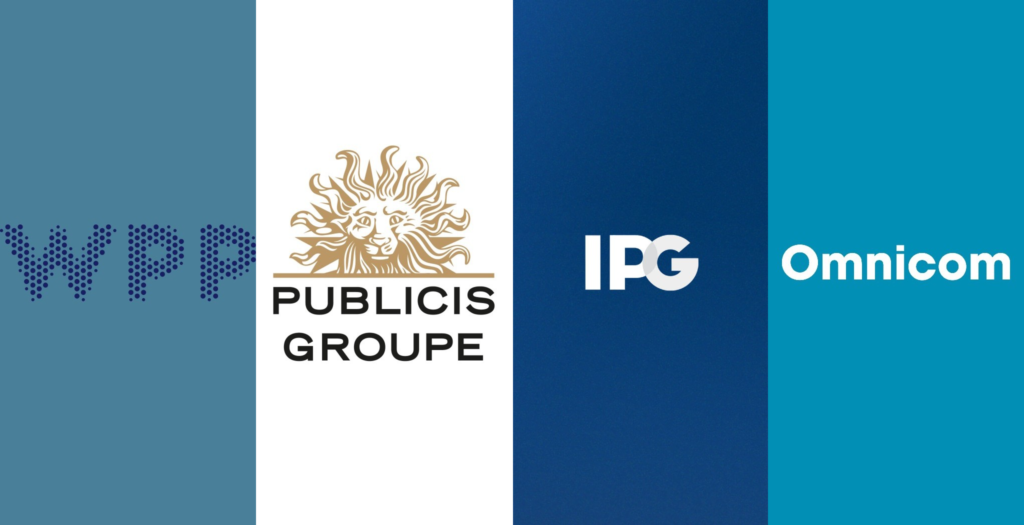 This time last year, each of the big four holding groups (WPP, Publicis Group, Omnicom, and Interpublic Group) were reporting the first signs of hope after a difficult two quarters caused by the pandemic. Ad spend levels were starting to improve, lockdowns were easing, and the agency groups were beginning to see a path to post-pandemic normality.

One year on, and the holding groups have not only recovered from last year, but are reporting significant organic revenue growth compared with 2019. We’ve heard executives from the big four saying they’re coming out of the pandemic stronger than before – their Q3 results suggest this may be true.

This set of earnings also marked something of a watershed moment, as Publicis overtook WPP as the world’s largest agency group, judged by market valuation. WPP took back the crown when its own results were released, but since then Publicis has crept back into the top spot.

Here are the key trends amongst the big four’s Q3 earnings, as well as the ways in which they’ve differed.

Organic revenue growth was more muted across the board in Q3 compared with Q2, though largely due to the fact that ad spend had started to recover in Q3 last year.

While performance among the big four has varied quite a bit in previous quarters this year, all four fared remarkably similarly in Q3, with just 4.5 percentage points separating WPP and Publicis.

This was perhaps the most positive news for investors. While strong growth over last year was to be expected, healthy growth over pre-pandemic years was by no means a foregone conclusion.

This more even performance between the agency groups was mirrored in less variation between markets too.

Previous quarters had seen major differences between revenue growth in Europe and the US, but this variation seems to have smoothed out across agencies too.

Similarly Omnicom and WPP reported slightly stronger growth in European markets than in the US, but again the difference was fairly small.

Investment in data capabilities has been a continuing theme for the holding groups in recent years. And all throughout this year, the big four have reported that those data investments are paying off, as these capabilities are a major driver of growth.

This trend continued into Q3. WPP’s media arm GroupM was up 19 percent year-on-year, which WPP CEO Mark Read attributed in part to Choreograph, a global data business launched earlier this year. Read said Choreograph contributed to WPP’s retention of Unilever’s media business, and the expansion of its work with pharma giant Bayer.

Ecommerce was also picked out as a significant growth driver by WPP, Publicis, and Omnicom.

While most brand categories had been ramping up ad spend earlier in the year, travel and tourism was the slowest segment to come back. Last quarter both Publicis and Omnicom said travel revenues were still down year-on-year.

Now, travel seems to have finally returned to growth. WPP saw a massive turnaround, with travel and leisure revenues up 29.6 percent year-on-year, one of its strongest performing segments. Publicis meanwhile saw a much more muted return to growth, with revenues up four percent.

And indeed, WPP and Publicis, the only two to break down revenue changes across all client sectors, said that all brand sectors are now growing year-on-year, the first time this has been the case since the pandemic.

Looking at the holding groups’ strategic priorities, one interesting thread in Q3 was a focus on various tools being developed to aid communication and streamline organisation within their agencies. As the big four come out of the pandemic and adapt to new ways of working, efficiency is being put in the spotlight.

Omnicom meanwhile said its Omni platform, an identity tool which aims to give a consistent view of consumers between Omnicom’s various agencies and practices, is helping drive greater efficiency. And IPG’s Krakowsky highlighted the impact of his company’s Open Architecture initiative, which aims to draw in relevant resources from across IPG agencies to work with clients.

Elsewhere, the holding groups’ strategic priorities were quite varied.

WPP’s Mark Read said his company is continuing to invest in AI, which accelerated last quarter through its acquisition of AI business Satalia. It will also look to continue building partnerships with the big tech companies. Recently WPP secured advertising partnerships with TikTok, Amazon and Snapchat – the company will look to build similar partnerships in the future.

Omnicom’s John Wren said he’ll be looking for acquisitions to boost its precision marketing, performance media, data, and ecommerce capabilities. Omnicom made three big acquisitions in these areas last quarter – with performance specialist Jump 450, digital ad agency antoni, and PR company OSK. Wren said Omnicom has now fully transitioned from a period of cleaning up its portfolio and trimming down waste, to actively seeking out acquisitions.

Publicis’ priorities are very much the same as they were last quarter. Sadoun said Publicis will continue to invest in tools for the post-cookie world, advanced TV, and retail media.

And IPG’s Krakowsky said his business is focussing on helping marketers meet growing expectations associated with their role. “Today, marketers are responsible for increasing business innovation, building new content platforms and e-commerce platforms as well as adopting emerging tech and leveraging data all while complying with an evolving data privacy landscape,” he said. “Our clients are also at the forefront for addressing societal issues and corporate purpose on behalf of their companies and brands.”

Increased forecasts across the board

With only one quarter of the year left, all of the big four felt confident in raising their guidance for full-year revenue growth.

These forecasts were, of course, accompanied by the usual warnings that a worsening of the pandemic could affect future results. And Omnicom’s John Wren also flagged a newer concern – that ongoing supply-side issues could impact future results.