Apple has always had a rocky relationship with advertising. In recent years various anti-tracking moves on its browsers and hardware have set the company at odds with the advertising industry. But Apple isn’t anti-ads by any means, and indeed seems to be increasingly pushing to expand its own advertising business.

Months after implementing ‘App Tracking Transparency’ (ATT), which forces apps on Apple devices to ask explicitly for permission to access the Identifier for Advertisers (IDFA), Apple has begun showing a new popup for its own apps. The popup appears on devices updated to the iOS 15 operating system, which is being rolled out in beta.

The popup asks for permission to personalise ads across Apple’s apps, such as Apple News and App Store. Apple says it uses data including account information, app and content purchases, and the type of news content the user reads, in order to personalise ads.

But there’s a remarkably different tone to Apple’s popup, compared to the one which third-party apps have to display in order to use IDFA. While third-party apps must explicitly ask to “allow tracking” across other websites and apps, Apple’s own notification extols the benefits of personalised ads, and emphasises Apple’s own privacy credentials: 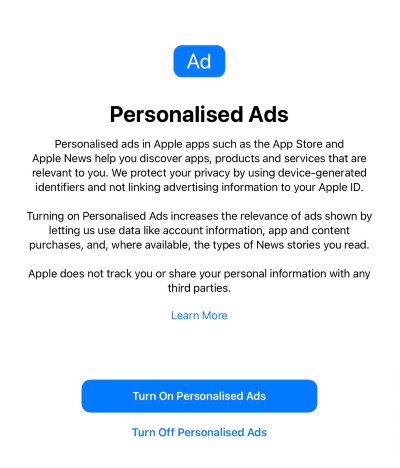 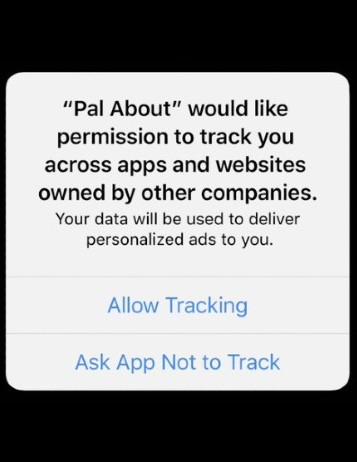 And through this popup, Apple seems to be attempting to get a larger portion of users to opt-in to ad personalisation on its own apps, strengthening its ads business.

Apple has already faced criticism for running its own ads business while arguably harming third-party app owners’ ability to monetise through ads.

Some have complained that Apple is applying different standards to its own apps than are faced by third-party apps. Apple maintains that it doesn’t track users across different apps, and that it protects privacy by not linking ad data to users’ Apple IDs. But while Apple may not technically track in-app activity on third-party apps, it is able to see which apps a users has downloaded, and which purchases they’ve made.

This data gives it a big advantage over other players in its ecosystem, especially as IDFA becomes less accessible across Apple devices. For app-install campaigns, which account for a large part of mobile ad spend, data on which apps a user is interested in and has spent money on is extremely valuable.

It’s notable too that this is happening while Apple’s ability to take a cut of all transactions on iPhone and iPad apps is under threat.

Apple historically has mandated that all in-app purchases must be made through Apple’s own payment system, with Apple taking a cut of the revenue. But this week Apple agreed in a settlement with Japan’s Fair Trade Commission that it will begin allowing ‘reader apps’ (apps which let users access previously purchased content like books, magazines, audio and video) to link to external websites, through which users can pay for subscriptions without going through Apple.

And with Apple still locked in a legal battle with Fortnite creator Epic Games over the way it controls App Store, the tech giant’s cut of in-app purchases risks being cut off. In that case, greater ad revenues could help make up the shortfall.