The WIR: Comcast and ViacomCBS to Launch Joint European SVOD, FTC Files a New Antitrust Case Against Facebook, and RTL Deutschland Set to Partner with Vodafone for Addressable Advertising

The WIR: Comcast and ViacomCBS to Launch Joint European SVOD, FTC Files a New Antitrust Case Against Facebook, and RTL Deutschland Set to Partner with Vodafone for Addressable Advertising

In this week’s Week in Review: Comcast and ViacomCBS announce SkyShowtime, Facebook gets hit with another antitrust case, and Vodafone set to work with RTL Deutschland on addressable ads.

The service will feature content from the NBCUniversal, Sky and ViacomCBS portfolio of brands, including titles from Showtime, Nickelodeon, Paramount Pictures, Paramount+ Originals, Sky Studios, Universal Pictures, and Peacock.

The SVOD service will be launched in 2022. The 20 territories it is being launched in exclude Sky’s main markets of the UK & Ireland, Germany & Austria and Italy. ViacomCBS and Comcast will have equal control and investment in this joint streaming venture.

The judge who dismissed the first filing gave the FTC a second chance to file their case, which alleges that Facebook illegally maintained a monopoly. The updated filing, although longer than the first, broadly maintains the same allegations, that Facebook used tactics like the acquisition of Instagram and Facebook to further its monopoly power, and that it blocked rivals from using its application programming interface.

Facebook had petitioned for FTC chair Lina Khan to recuse herself from the vote over past critical comments about the big tech players. Khan did vote, despite the calls.

Vodafone GigaTV customers will get more access to RTL’s linear channels, and its premium streaming service RTL+ will be available as an app. And with this new deal, they have agreed to collaborate on the advertising side of things too, working together to develop technical solutions for group-based targeted advertising.

InfoSum Raises $65 Million
InfoSum has raised $65 million in Series B funding. Before this latest investment, InfoSum was valued at $300 million. That represents a significant increase from the $100 million valuation it received before its last funding round in 2020. The funding, which came entirely from UK-based investment company Chrystalsis Investments, will contribute towards increasing the ad tech company’s team and global presence.

China Rebukes WeChat and 43 Other Apps for Breaking Data Transfer Rules
China’s Ministry of Industry and Information Technology (MIIT) said on Wednesday that it had found that TenCent’s WeChat and 43 other apps were breaking data transfer laws. The authorities said that the apps were illegally transferring users’ data and ordered their parent companies to make rectifications. The move comes among a wider crackdown on privacy and data regulation.

Facebook Launches VR Work App
Facebook has launched a test of a VR work app that it is calling a step into the metaverse. Facebook’s Horizon Workrooms app will be available to users of the company’s Oculus Quest 2 headsets. The social media company said it would not use people’s work conversations and materials in the app to target ads on Facebook.

Conversational Ad Tech Company Cavai Raises £6.5 Million
Cavai, a conversational ad tech company, has raised £6.5 million. The funding came from a range of investors including Norway’s two largest venture players, Investinor and Idekapital, and ad tech industry specialist FirstPartyCapital. Cavai says it will use the money to develop its product portfolio and to expand in the US as it gets IPO ready.

Channel 4 to Become the First Broadcaster in UK to Share Streaming Data With Producers
UK public-service broadcaster Channel 4 has launched the Producers Performance Report, which will provide individual producers with data on how their new programmes have performed on BVOD service All 4 and the linear channels. The tailored report will give indie production companies benchmarking information that is intended to provide key insight to enhance programmes streamed on All 4.

Discovery’s TVN24 Obtains Dutch Licence That Will Allow it to Keep Operating in Poland
Discovery’s Polish news channel TVN24 has obtained a Dutch licence that will allow it to continue operating in Poland if its licence in the country isn’t renewed. TVN24’s licence expires next month, but there is doubt over whether it will be granted an extension after the Polish parliament passed a bill  that would strengthen a ban on companies from outside the European Economic Area controlling Polish broadcasters. Under European Union rules, the Dutch licence will allow TVN24 to keep operate in Poland.

Charter’s Spectrum TV Reintroduced on Roku
Charter’s OTT app Spectrum TV will be available again on Roku. The deal ends a nine month impasse that meant the app was no longer available on Roku’s platform. Since mid-December of last year, Charter video subscribers could still use the Spectrum TV app on Roku, but only if they had an existing download.

Global Streaming Rose 13 Percent in Q2 2021, According to Report
Streaming globally rose 13 percent in Q2 2021, according to a report from Conviva, an intelligence cloud for streaming media. The figures also showed a 46 percent rise for Smart TVs specifically. Conviva reports that Roku is the leading streaming platform, with a 31 percent share of global big screen streaming time.

Future Acquires Dennis Titles for £300 Million
Future has announced the acquisition of Dennis Publishing, a deal which includes titles like The Week, The Week US, and IT Pro. Future is acquiring the titles for £300 million. Dennis was bought by private equity group Exponent in 2018 for an undisclosed sum. While Future is buying the majority of Dennis’s titles, it will not acquire satirical magazine Viz, or Fortean Times, a magazine dedicated to anomalous phenomena. Neither will it acquire Expert Reviews or Cyclist. Read more on VideoWeek.

Axel Springer in Talks to Buy Politico
European publishing giant Axel Springer is in talks to buy a controlling stake in current affairs publisher Politico, according to the Wall Street Journal. The two already work together closely via Politico’s European edition, a 50/50 venture between the two. The reports follow rumours earlier this year that Axel Springer was eyeing up digital news publisher Axios.

Ziff Davis Builds War Chest for Spending Spree
Digital publisher Ziff Davis will get a $1 billion infusion of capital to help it buy up more media properties when it returns to the stock market later this year as an independent company, according to the WSJ. Ziff Davis’ parent company J2 Global is already publicly traded, but is being split into two smaller companies, the bigger of which will be Ziff Davis.

OnlyFans Launches a CTV App, While Banning Sexually Explicit Content
OnlyFans, a content subscription service which has become known as a hub for adult content, this week launched a safe-for-work CTV app. OFTV, which OnlyFans doesn’t plan to monetise, was seen as an effort to distance OnlyFans from its adult image, which has so far kept its app off the Android and Apple app stores. OnlyFans followed this a day later by formally banning “sexually explicit conduct”. The move has sparked backlash, with some commentators complaining that OnlyFans is banning the very thing which has made it successful as a platform.

in solidarity with OnlyFans, our show will no longer feature the song ‘9 to 5’

BuzzFeed Reportedly Came to Blows with NBCU Over SPAC Deal
BuzzFeed reportedly clashed with stakeholder NBCUniversal over its recently agreed deal to go public via a merger with a special purpose acquisition company (SPAC). NBCU executives were reportedly frustrated by the valuation of the deal, since it valued BuzzFeed at $1.5 billion, lower than when NBCUniversal invested.

YouTube Reportedly Undercutting Publishers’ Direct Sales
Premium publishers are struggling to sell their YouTube ad inventory, as YouTube’s own sales are massively undercutting publishers” prices, according to The Information. The Information cited one publisher who said three years ago they directly sold 40 percent of their YouTube inventory, but that has now dropped to 10-15 percent.

Snapchat Launches New Trends Tool
Snapchat this week launched a new tool to help marketers understand the conversations and content being shared on the platform. Snapchat Trends surfaces trending keywords and topics on Snapchat, and can be accessed via Snapchat’s own website. 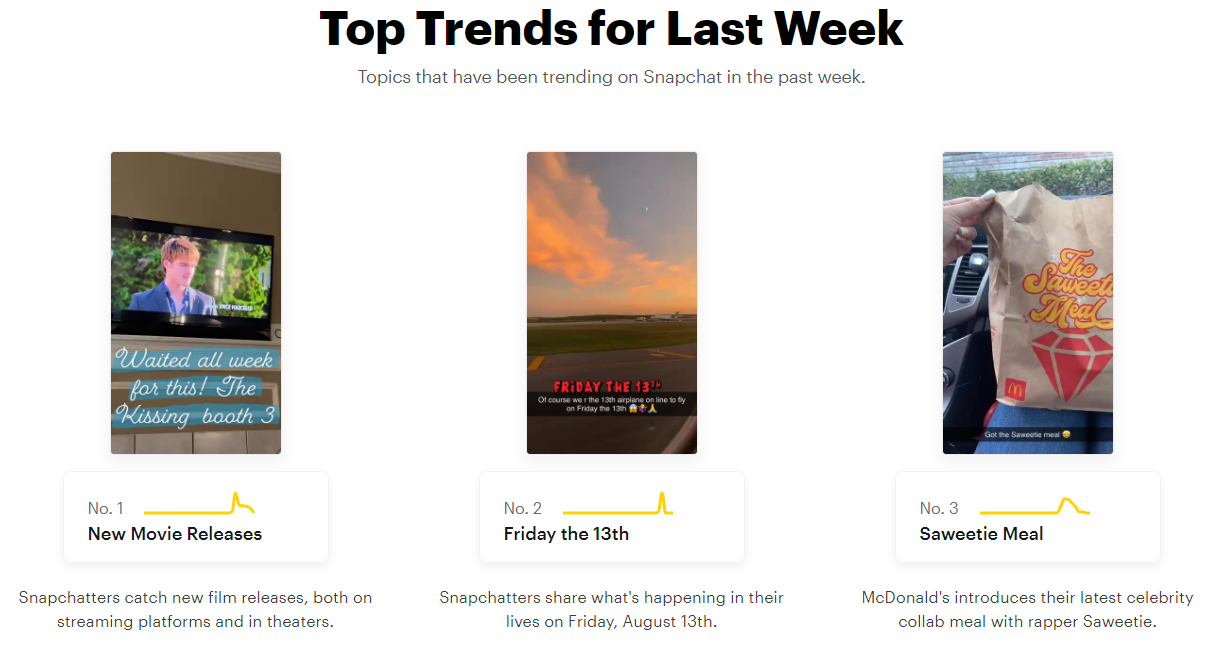 Facebook Selects Crop of Journalists for Bulletin
Facebook has chosen 25 independent journalists to be paid out of its $5 million fund for Bulletin, its newsletter subscription service. Facebook told Reuters there will be 100 journalists signed up to its platform “by the fall”.

Marketers Spend Bulk of Time Reporting Rather Than Creating, finds PHD
Eighty-eight percent of marketers globally say they spend the majority of their time on reporting tasks, according to research from PHD and WARC, with the average amount of time spend on reporting having increased by 57 percent over the past ten years. Meanwhile marketers say they spend on average 18 percent of their time thinking creatively and coming up with new ideas.

UK Agencies Home and IMA to Merge
Leeds-based agencies Home and IMA have agreed a merger, combining to create IMA Home. The two companies combined have 11 offices in six countries, and plan to grow their staff count to 600 within three years, according to Campaign.

Marketers Struggle To Demonstrate Marketing’s Value to CEOs
Marketing executives fear they will struggle to convince their CEOs of marketing’s value over the coming year, according to new research from Forrester, with 71 percent saying they think they’ll face challenges. But only 28 percent are sure they can accurately measure and attribute the impact of their marketing campaigns.

Adam Crozier Becomes BT Chairman
BT has named Adam Crozier as its next chairman. Crozier was formerly CEO of ITV.

How Snapchat Defied the Doubters As It Approaches Its Tenth Birthday, read on VideoWeek

Going All-In on Streaming is a Major Risk for Sports Leagues, read on VideoWeek