How Snapchat Defied the Doubters As It Approaches Its Tenth Birthday

How Snapchat Defied the Doubters As It Approaches Its Tenth Birthday

At least to some people, it might be said that the company has defied expectations. In 2017, a company called Fluent, carried out a survey of 3,327 adults and found that nearly half of adults thought the messaging app would be a fad. Then when Facebook effectively cloned Snapchat features by launching Instagram Stories, high profile commentators like Scott Galloway predicted it would kill off Snap entirely.

Instead, the company has not only survived, but has evolved on a steady growth trajectory, both in terms of users and revenue, the only exception being a relatively minor dip of two million users in Q3 2018, which turned out to be more of a temporary blip than the beginning of a downward trend.

Snapchat began life in 2011 as a messaging app, allowing users to send photos or short videos to each other, with the USP being that the messages would disappear after the recipient opened them, which was a major plus for young people concerned about the prying eyes of teachers and parents.

Since then, the company has evolved into a feature-rich platform and they have been first to market with a number of new features. In 2013 Snapchat introduced “Stories”, a feature that numerous other social media companies have tried to replicate on their own platform. Similarly, the introduction of AR-enabled filters or “Lenses” in 2015 is something that other social media platforms have tried to emulate.

The company expanded its offering for brands and media partners in 2015, with the “Discover” page on Snapchat. Discover acts like a newsfeed, allowing users to access stories from publishing partners, brands and influencers, and Snap has also produced “Snap Originals”, short-form TV shows that are available exclusively on Snapchat. US rapper Megan Thee Stallion is one star featured on the platform, starring in an unscripted show “Off Thee Leash With Megan Thee Stallion”.

However, whilst the platform has continued to evolve, Toccara Baker, product marketer, EMEA at Snap insists that the app continues to be camera-centric. “At our core, we are a camera-first company. The app opens to the camera, and that’s really the first place where the community starts to experience the app,” she said.

If you’re in any way sceptical about Snap’s claim to be camera-centric and insist on putting them in the social media bucket, a slide from the company’s most recent set of results in July 2021, really does tell a story of a company that is focused mostly on the camera. (Click to enlarge image): 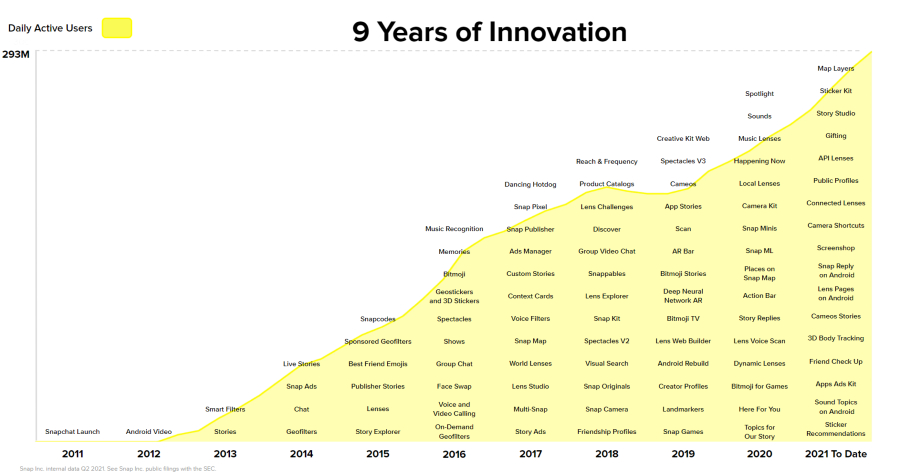 As well as original content from rappers and other celebrities, Snapchat has branched out to provide a space for content creators on the platform. “Spotlight” is a TikTok-like feed that allows the user to scroll through Snapchat videos from other users outside their family and friends.

“What we were seeing is that a lot of things that people were creating and engaging with on Snapchat would end up on other platforms. That was an indication that the opportunity for Snapchatters to share that with the rest of the community was something that they really wanted. But we wanted to also ensure that we were building tools for creators, because that’s really where the value comes,” Baker said.

Keeping Ahead of the Trend

Having been around for almost a decade, Snapchat is no longer the new kid on the social media block. However, the app remains extremely popular among young people.

According to 2020 data from research company AudienceProject, 48 percent of Snapchat’s users were aged 13-24. In the UK, the company reports that they reach over 75 percent of 13-24 year olds.

Snapchat has gained both users and publisher and advertiser partners through the introduction of new features on its platform over the years. Snapchat had features like AR lenses and stories before any other major platform, something which appealed to tech-savvy young users.

One area in which Snapchat hopes to be ahead of its rivals is in its augmented reality (AR) capabilities. Although other platforms are making investments in AR, Snapchat has one of the most established presences in the area. Snap reports that on average 200 million users engage with AR every day on the platform.

While the original use for AR on the platform was light-hearted dog-ear and flower crown filters, Snapchat is now building out the technology for more utilitarian use cases.

“We’re doing it in a way that really does align with our values by providing fun and exciting experiences to Snapchatters, but also useful experiences,” Toccara Baker said.

Using Snapchat’s Scan capability, users are able to do things like solve math problems and identify different plant types and dog breeds through the app. Snapchat says this feature is used by 170 million users a month.

For advertisers on the platform, there will be opportunities to promote brands through the AR technology. Shoppable AR is one such area, it allows users to experience products virtually. For example, last year Snapchat partnered with Gucci and Dior to bring shoe try-on experiences to users. Users could then follow on directly from that filter to purchase the shoe.

“We’ve seen a lot of excitement around shoppable AR. It provides a way for advertisers to bring a product to life, to really allow our community to experience that product. Which is especially important given the pandemic and restrictions in terms of engaging with something in a store,” Toccara Baker said.