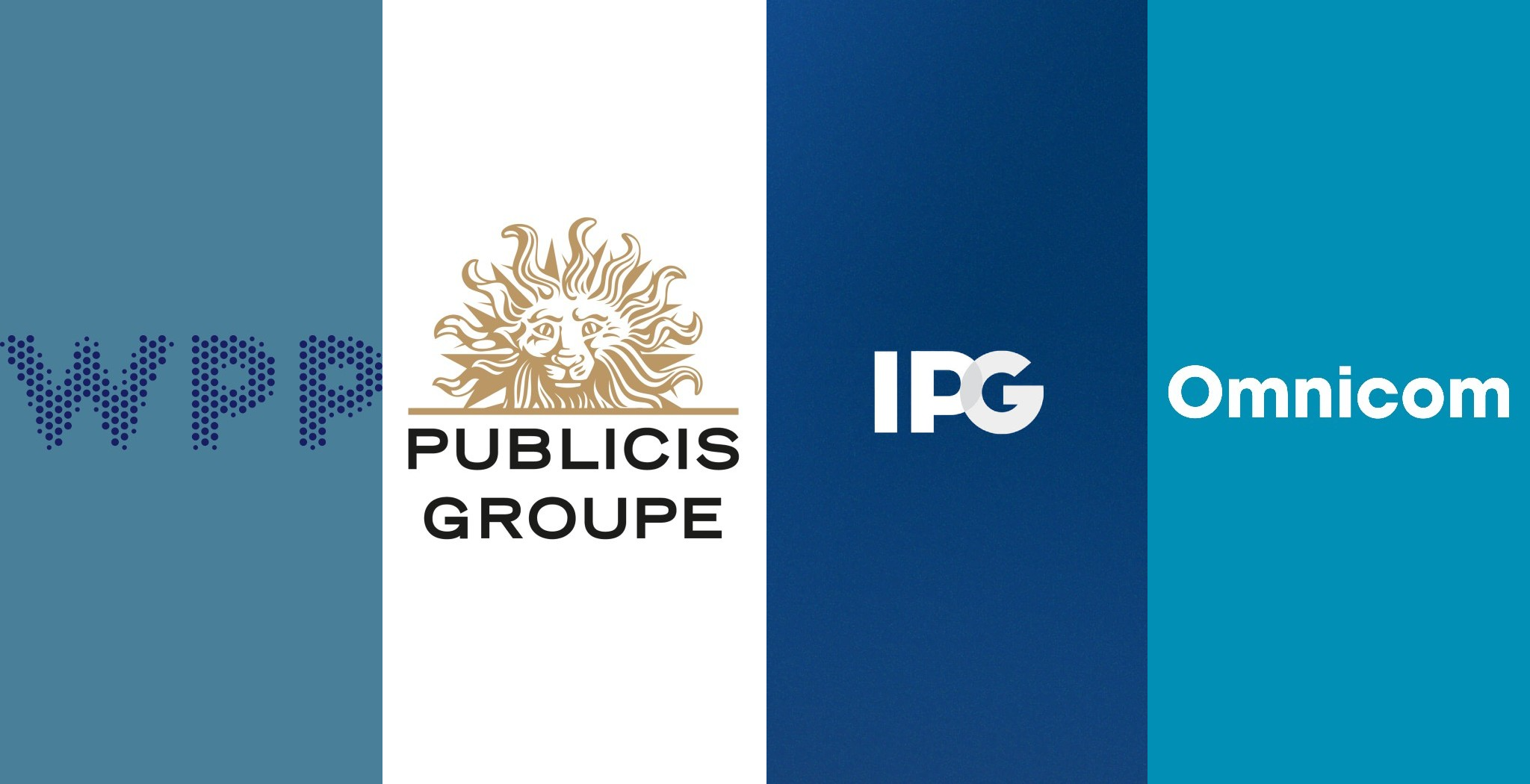 In the second quarter of 2020, the big four agency holding groups (WPP, Publicis Groupe, Interpublic Group and Omnicom) were each hit hard as the pandemic took its toll on ad spend. Now one year one, the recovery is in full effect.

After a positive first quarter, each of the big four reported strong organic revenue growth. While this was to be expected given the low base set in 2020, the speed of the recovery has been better than many had hoped. With these latest results, both WPP and Publicis say revenues have now returned to pre-pandemic levels.

A closer look at the results shows the ways in which the holding groups are charting a similar path, as well as the ways in which they’re diverging. Data continues to be a big focus for all four, with connected TV and ecommerce also frequently cited as sources of growth. And all four reported a return to growth in most brand categories, with travel remaining the exception. But while M&A is on the cards for some, others are still working to slim down their businesses.

Here are the key trends amongst Q2’s earnings, as well as the ways in which they’ve differed.

Strong organic growth across the board

Organic revenue growth was strong across all four holding groups – although a failure to post strong growth compared to last year’s Q2 low would have been a disaster for any of the big four.

Shareholders seem pleased with these figures, as all four holding groups have seen their share price rise since Omnicom, the first of the big four to report, released its results. At the time of writing, WPP’s share price has risen 7.2 percent, Omnicom’s is up 2.6 percent, Publicis’ is up 6.7 percent, and IPG’s is up 17.7 percent.

Consistency in the US, variation elsewhere

As was the case in Q1, there were distinct differences in the markets where each of the agency groups saw their strongest growth.

In the US, all four companies saw fairly similar levels of organic growth. Omnicom had the highest at 19.9 percent, followed by IPG with 17.4 percent, Publicis with 15.2 percent, and WPP with 12.6 percent.

But elsewhere there was more variation. The UK for example was particularly strong for WPP, which saw 31.8 percent organic growth. For IPG on the other hand, UK growth was much more in line with the US, at 18.7 percent.

For Omnicom, the Asia Pacific region was particularly strong, seeing organic growth of 27.9 percent. But for Publicis and IPG, growth was much slower, at 13.6 percent and 14.0 percent respectively.

And for IPG, LATAM was the highest growth region, reaching 48.0 percent organic growth. For Omnicom, the only other group to give a figure for the region, growth sat much lower at 20.8 percent.

In terms of specific growth drivers, many of the trends across the four agency groups were somewhat unsurprising.

Media agencies, and particularly revenues from digital media, were picked out as strong performers across all four media groups. WPP’s media unit GroupM saw 28.6 percent growth in Q1, while Omnicom said media was the primary growth driver in its media and advertising segment, which was up 29.8 percent.

Ecommerce was also highlighted by Krakowsky, as well as WPP’s CEO Mark Read and Publicis Groupe’s chairman and CEO Arthur Sadoun, as a strong performer in the quarter.

And connected TV, a theme in just about every ad tech company’s earnings nowadays, is starting to be singled out by the agency groups too. WPP’s Read said the group’s strong performance was due to its leadership in CTV, as well as programmatic. And Publicis’ Sadoun mentioned CTV as a core part of his company’s strategy, and a contributor to success.

All four agency groups reported that the majority of brand segments are significantly increasing their advertising and marketing activity, after scaling back or pausing campaigns in Q2 last year.

Consumer packaged goods and healthcare, two categories which performed well even during the pandemic, are still seeing growth. Healthcare was actually Publicis’ fastest growing brand category across the whole of H1, and the other three groups each reported strong growth in healthcare.

Automotive meanwhile was one of the worst hit categories last year. But it seems that automotive ad spend is now recovering fast. Interpublic Group reported that automotive revenues were up by more than 20 percent, while Publicis saw growth of 12 percent.

Travel spend however has not had the same recovery. Leisure and travel was Publicis’ only reported brand segment where revenues were down year-on-year, by four percent. And Philip J. Angelastro, Omnicom’s CFO, said his company is still seeing “continued reduced spend levels for many of our travel and lodging clients”.

Focus on simplification, investment in data, CTV, and retail media

Looking at strategies for the future, simplification of large sprawling structures and diverse offerings is a continued theme for each of the big four, though they’re each at different stages of the process.

WPP’s focus is now on the ‘grow’ part of its ‘simplify and grow’ strategy. Having shed and merged a number of its holdings, CEO Mark Read said the company is now looking at acquisitions which align with its current areas of focus.

“Our focus in M&A is very much on ecommerce, on marketing technology and on data and analytics. No doubt there’ll be other areas of interest to us, but that’s really where we are focusing most of our effort,” said Read.

Omnicom’s chairman and CEO John Wren meanwhile said his company is looking to “dispose of companies that are no longer aligned with our long-term strategies and investment priorities”, having sold off its specialty media business ICON International last quarter.

But M&A is still on the cards for Omnicom too. “In the month of July, since I was the one who could travel internationally most freely, I completed two transactions myself which I haven’t yet closed, but will close in the coming weeks and months,” said Wren. “And our M&A groups are really beefed up and we’re looking at quite a number. It’s almost back to the early 2000s in terms of the number of companies we’re actually looking at.”

IPG’s Krakowsky meanwhile said his company’s focus is on implementing its open architecture solutions, where it brings together IPG brands “in collaborative teams that are customised to client-specific business needs”.

And data, commerce, and CTV were each commonly cited as big strategic focuses. Krakowsky said IPG is working to make sure its data units Acxiom and Kinesso are involved more comprehensively in its work. WPP’s Read said its new data and analytics Choreograph will be a big focus for the company going forward. And Publicis’ Sardoun said his group’s strategic priority is staying ahead of new “revolutions” in identity, connected TV, and retail media.

Increasing confidence for a full recovery

There is still, as there has been since the start of the pandemic, a lot of uncertainty about the future for the agency groups. And Omnicom in particular remained cautious in giving out forward-looking statements.

“Global economic conditions will continue to be volatile as long as the COVID-19 pandemic remains a public health threat, including as a result of new information concerning the severity of the pandemic, government actions to mitigate the effects of the pandemic in the near-term, and the resulting impact on our clients’ spending plans.” the company said in the press release accompanying its results.  “We expect global economic performance and the performance of our businesses to vary by geography and discipline until the impact of the COVID-19 pandemic on the global economy subsides.”

The others however, while acknowledging the risks, seemed somewhat more upbeat.

WPP said it now expects total organic revenue growth in 2021 to sit between 9-10 percent. And its confidence was marked by the announcement that it has planned £600 million in share buybacks over the course of this year.

And Publicis’ Arthur Sadoun said that he now expects full year organic growth of seven percent, and a full recovery in H2 provided there are “no major deteriorations in the global sanitary situation”.