People in the UK spent a third of their time in 2020 watching TV and online video, according to Ofcom’s annual Media Nation report. British audiences spent 2020 most of the year in varying degrees of lockdown and the extra time at home resulted in a daily average of five hours and 40 minutes watching TV and online video last year. That’s an increase of 47 minutes from 2019.

People in the UK also spent double the amount of time watching SVOD services in 2020 than they did in 2019. They spent an average of one hour and five minutes every day watching subscription streaming services like Netflix and Disney+. 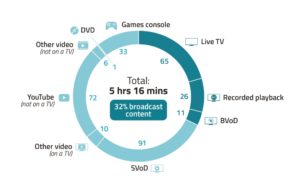 In line with this increased viewing time for SVOD platforms, subscriptions also went up. By September 2020 three in five UK homes had at least one streaming subscription, compared to half of homes a year previously. According to Ofcom, there were 31 million subscriptions to streaming services in the UK in 2020, which represents almost a third increase from 20 million in 2019.

Advertising revenue contracted in the UK for the first time since 2012, and TV was no exception. TV advertising saw a 15 percent decline in revenue in 2020. Online advertising saw growth and video was the largest proportional growth in 2020, which increased 18 percent year on year.

The decline of linear TV advertising on public-service commercial television is nothing new. However 2020 was a particularly bad year for the likes of ITV, Channel 4 and Channel 5, with a collective year-on-year decline of 14 percent in real terms. The upside was that commercial public service broadcasters were able to partially recoup this from their BVOD offerings. BVOD ad revenues grew by 15 percent year on year to £523 million.

TV ad revenue is predicted to rebound in 2021, but beyond this year, growth in the area is forecast to come mainly from BVOD. The AA/WARC Expenditure Report estimates a 13.9 percent increase in this medium in 2022, and GroupM forecasts an increase of 19.4 percent. However, TV advertising, excluding BVoD, is expected to have little or no growth in 2022 (with AA/WARC Expenditure Report predicting 0 percent growth and GroupM 0.8 percent.)

Ofcom note that broadcasters have invested in technologies to prepare for a future where their BVOD services are increasingly important. The report notes investments into areas like cross-media measurement, such as the CFlight initiative, which Channel 4, Sky and ITV recently announced. It also says broadcasters are investing in their programmatic and addressable advertising abilities in order to adapt to the future.

Reacting to the report, addressable TV advertising provider Finecast emphasised how important harnessing data on BVOD could be. Kristian Claxton, managing director at Finecast, said, “As catch-up and BVOD gain even more prominence – and the opportunities to harness data that enables – those audience segments can be reached with relevant and creative ads that allows advertisers large and small to engage with those consumers who matter most to them, and actually deliver a more efficient campaign as a result.”

Although, on average, people still spent more than double the time watching linear broadcast TV (three hours and 12 minutes) than they did watching SVOD services, this trend was driven by people over the age of 45. For young people aged 16-34, only 32 percent of their time was spent watching broadcast content, compared to 61 percent for the population as a whole.

BVOD services, like BBC iPlayer and All4, were watched significantly less than the SVOD platforms. On average, people in the UK spent 12 minutes a day watching BVOD content. Unlike subscription streaming services, young people did not watch BVOD services more than the general population. The average daily viewing time of BVODs for this age demographic was 11 minutes per day.

The broadcasters’ streaming services have struggled to keep up with the volume of content held by the big subscription platforms. SVOD services offer UK viewers a combined total of 115,000 hours of content to choose from. On the other hand, the combined content calendars of All 4, BBC iPlayer, ITV Hub and My5 is less than Netflix’s alone at 37,000 hours compared to 38,000.

Netflix had the most blockbuster programmes out of the SVOD services. 29 out of the 30 most titles on subscription services in Q1 2021 were from Netflix.

Craig Armer is strategic insight director at Kantar, he emphasised the importance of high-quality original content and user experience for the SVOD services.

“High quality exclusives like The Mandalorian and WandaVision continue to play an important role in generating sign ups to newer challengers such as Disney+, whereas Amazon’s Prime Video service was buoyed by the wider growth of online shopping over the pandemic.

Exclusive Premier League games over the Christmas period successfully converted those initially subscribing for free delivery. However, when it comes to user experience, Netflix is the clear winner, with over half of all subscribers rating it a 9 or 10 out of 10, something the other services are unable to boast quite yet,” Armer said.