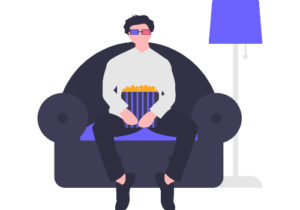 Many of the most talked about TV shows and films are now available exclusively on streaming platforms. Unlike the blockbuster TV programmes of the past, when half the country would tune in at 9pm to see the latest episode, the likelihood of audiences tuning in simultaneously has been steadily eroded.

However, various players in the market are working on ways to enable audiences to enjoy streaming experiences together online, even when they can’t be together in the same room. They are known as ‘co-viewing’, ‘co-watching’, or ‘watch-party’ experiences, where a group of people comes together online to watch a programme or film on a streaming service simultaneously.

Both the streaming services themselves and third-party companies have launched tools or platforms to enable co-watching. Apple recently announced that they will be launching SharePlay in iOS15, a tool that will allow users to watch Apple’s partner streaming services together while on FaceTime.

Scener is a watch party platform that enables users to video chat with each other while watching simultaneous streaming content. Scener is an agnostic platform, meaning that it isn’t designed for any particular streaming service.

Joe Braidwood, co-founder and COO of Scener, said the idea of chatting with your friends on camera while watching video content is something that was happening before the emergence of co-viewing platforms like Scener.

“We did some research pre-pandemic around the viewing behaviour of different demographics. One theme emerged quite early on, which was that young women from the 16-24 Gen-Z demographic were already doing this. They were just doing it manually, so they would FaceTime each other, and then they would count down three to one and press play,” Braidwood said.

If the viewing is taking place on an SVOD service, platforms like Scener require that all participants in these watch parties have their own subscriptions. Braidwood says that the fact that most people now have access to at least two or three of the same biggest streaming services makes it easier to enable co-viewing.

But whilst there are now many ways to watch streaming services simultaneously, the functionalities of the various platforms differ.

Many of the co-watching tools that streaming services have built into their services currently allow text chat only, rather than video or voice chatting options. For example, on Disney+’s GroupWatch service, users can only communicate with a set range of emojis.

In contrast to third-party tools like Scener, which is a Google Chrome extension, these may have been designed with connected TV (CTV) in mind, where viewers are less likely to want to use video chat.

Braidwood says that platforms like Scener provide more of a lean-forward experience, which there is a market for.

“Young people, like university students, often don’t have their own TV set. And they often crave social interaction, perhaps more than consumers with families. This demographic often uses their laptop to watch TV and they welcome that lean-forward experience where they can interact with friends while they watch,” he said.

Braidwood says that Scener are still toying with the idea of CTV, which he calls “the holy grail of this behaviour set”. He says that the company is exploring ideas such as chat being enabled on an app on your phone while the content plays out on your CTV.

However, Scener is still working out how consumers would want to use these capabilities.

The platforms experimenting with co-watching hope it can extend beyond enjoying content with friends, and the plan is for it to feed more heavily into live events and the launch of new shows.

For example, HBO Max, who are a partner of Scener, held a watch party for the release of Zack Snyder’s Justice League in March. HBO Max subscribers were able to engage in a Q&A with director Zack Snyder before the event, and then watch the film along with him.

Reaction videos from influencers on platforms like YouTube and Instagram are a very popular genre. For example, over 1.2 million people have watched former Love Island contest Molly Mae Hague react to a new episode of the reality TV programme on YouTube.

The popularity of these kinds of videos suggests that there’s scope for influencers to tap into new audiences and to assist with the marketing of new shows.

There could be some upside for advertising too.“For those streaming services that have ads, whether they’re a tiered, ad-supported service or an AVOD platform, the lean-forward experience is a good thing,” Braidwood said, “If you are watching with friends,  and you love that film, then you’re highly engaged in your content, then you’re going to pay more attention to the ad breaks, because it’s not just an ad break, it’s an ad break with a friend,” Braidwood added.

Will It Continue Post-Pandemic?

The pandemic seems like it was, in many ways, the optimum time for people to adopt co-watching habits. But Joe Braidwood says last year was a catalyst rather than an anomaly.

Many of the streaming services launched their own co-watching tools during the pandemic. Amazon Prime launched its Watch Party in June 2020, Hulu’s service of the same name was launched in May 2020, and Disney+ launched GroupWatch in October 2020.

Netflix is a notable absence among streaming platforms that have built their own tools for co-watching. Netflix is supported on all the agnostic platforms, and perhaps the streaming giant feels it simply doesn’t need to build its own equivalent.

Braidwood says that rather than detracting from agnostic platforms like his, what the tools brought to market by the services themselves do is bring attention to the practice of co-watching. He says that it is “very hard to make synchronised viewing work well” and is confident that a platform like Scener, that is built specifically to facilitate co-watching, will perform better than tools built into the streaming services.

Post-pandemic, Scener actually saw their biggest months in April and May of this year. There were over 131 million minutes of synchronised viewing on the platform in May 2021. By this point, certainly in the US where Scener has most customers, most stay-at-home orders had already been lifted.