Will 5G and Big Tech Investment Finally Push AR into the Mainstream?

Will 5G and Big Tech Investment Finally Push AR into the Mainstream? 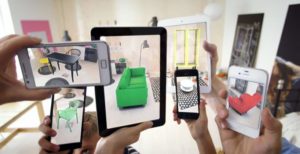 5G’s global rollout started in 2019 and now 61 countries have at least some 5G access as it slowly starts to displace 4G as the dominant cellular network standard. By 2025, it is estimated that 2.8 billion devices will have 5G connectivity.

With its greater speed and lower latency, 5G is set to enable more apps and technologies to come to market that wouldn’t have been possible before. Augmented reality (AR) has been frequently touted as one area that could be more widely adopted as a result of 5G capabilities.

Whilst AR is sometimes written off as a gimmicky feature rather than a media revolution in its own right, the global tech giants are taking it more seriously than most and are making big AR investments.

In spite of the failure of Google Glass when it launched AR glasses in 2013, Apple is widely expected to launch smart glasses but hasn’t confirmed a launch date, and last month the company invested $410 million in optical technology company “II-VI”, suggesting they’re seriously committed to the project.

Mark Zuckerberg said that Facebook will launch Ray-Ban branded smart glasses in 2021. And  Snap is already offering its AR Snap Spectacles to developers and creators to test out their capabilities before launching them into the mainstream market.

“We’re still at the stage where most AR in the world today is quite fun, entertaining and somewhat frivolous. That’s largely driven by what you see on social networks, which has been the genesis of getting AR into the public domain. I think that what’s happening now is, and what 5G is helping to enable, is more sophisticated utility usages, such as in e-commerce,” he said.

AR has already been getting early traction in ecommerce.  For example, IKEA’s Place app allows you to view pieces of furniture in your own home. You can also try on shoes you might want with app Wanna Kicks, or see what a Porsche would look like in your driveway

Verizon Media have been investing in AR, but their early efforts have been frustrated by the existing 4G network which can’t support many of the more ambitious projects.

“Right now producing photo-real 3D content requires incredible amounts of data, very expensive hardware, and long processing times on that hardware,” Mark Melling, 5G lead Verizon Media EMEA said. “What we can do with 5G, especially on the move, is to leverage cloud computing, or more specifically edge computing, so that we can send this data to incredibly smart technology to render that 3D content, almost in real time and have it sent back to our devices for production purposes, ”he added.

5G adoption is also going to lower the barrier to entry when it comes to the devices required to run AR. “It means that the processing power that you would traditionally have associated with the high-end smartphone can now all be done in the cloud. So even a $100 phone could do some very smart things with AR,” Blippar’s Galaria added.

Galaria and Melling both agreed that 5G will usher in a new area as the various components required to make it scale are finally coming together.

“With many apps that are now household names, what facilitated it was a product of the coming together of a number of different ecosystems. For example, with Spotify it was a combination of Facebook being there, the iPhone launching with 3G technology, as well as music compression. The bearer is fundamental to the rest of the ecosystem coming together,” Galaria said. “Which is why I think now is the right time for AR, because we’re at the start of this global rollout of 5G, which wasn’t there even two or three years ago,” he added.

But in the meantime, AR is perceived as something of a novelty, and still faces cynicism about whether it will be widely adopted in the near future. Mark Melling points out that to begin with people felt it was odd to be staring at a mobile phone screen in their hand. He believes that AR, with its ability to transform digital experiences from 2D to 3D, will actually “humanise” the technology, and that 5G will help bring it to the masses.

“Why has video streaming become such a popular thing to do on the go? Our first thought isn’t about 4G, but that’s actually what super-powered video streaming capabilities on the go. For someone like me who heads a creative tech studio that is an engine for XR technology, 5G is that for us,” he said.