According to the Italian media outfit, the offering will be based on an “experimental pyramid offering”, with all Mediaset network content available at the base, with the addition of new “digital first” exclusive content designed for the web. The first of this second kind of content will be debuted in Autumn.

Mediaset Infinity will offer movies and series on-demand, including box-sets of international shows such as Game of Thrones as well as movies including Godzilla v Kong, Judas and the Black Messiah, Lord of the Rings and The Hobbit.

Disney to Shutter 100 International Channels
Disney will shutter 100 international TV channels by the end of the year, the company said at a JPMorgan Conference this week. CEO Bob Chapek revealed plans to switch off further networks, following recent closures in the UK, Australia and New Zealand, with more to follow in Southeast Asia and Hong Kong in October.

The company is looking to prioritise its streaming service Disney+, with some of the contents from these linear channels being made available on the streaming platform.

In Southeast Asia are Hong Kong, Fox, Fox Crime, Fox Life and FX are among those that will be closed later this year, less than three years since Disney acquired them through its purchase of 21st Century Fox.

Cookie Free Measurement Must Rely on First-Party Data and Modelling, Google Tells Marketers
Any advertisers hoping that Google might be working on a measurement-specific alternative for third-party cookies in Chrome would have been left disappointed at Google’s Marketing Livestream yesterday. Google warned marketers that once third-party cookies are no longer supported, measurement must rely on consented first-party datasets, with predictive modelling left to fill in the blanks.

One spot of good news for advertisers was news that Google is introducing a new way to measure conversions where cookies aren’t available. “These enhanced conversions work by allowing your tags to use consented, hashed, first-party data like email addresses, from wherever your conversions are recorded,” said Vidhya Srinivasan, VP/GM of ads buying, analytics and measurement.

But the broader message to marketers was clear. Start building out your first-party data sets now, or you likely find measurement very difficult in the post-cookie world.

Amazon’s Pricing Policy Hurts Consumers, Claims Washington DC Lawsuit
Amazon’s policy prevents sellers on its platform from offering better deals elsewhere leading to higher prices for consumers, according to an antitrust lawsuit filed by the District of Columbia on Tuesday. The lawsuit focuses on the contract between Amazon and its sellers, which it says prevents sellers from offering lower prices on any website including Amazon itself. Amazon denies the claims saying sellers set their own prices.

The UID 2.0 Code Base is Now Open Source
Unified ID 2.0 is now officially open source. On Monday, The Trade Desk committed the full open source code base for Unified ID 2.0 to the Partnership for Responsible Addressable Media (PRAM) Technical Working Group. This means that anyone can now view the code and be able to contribute to the code base.

LiveRamp Expands Into Identity Resolution for First-Party Data
LiveRamp is expanding into identity resolution with a new product called Portrait Engine.The product will help marketers build identity graphs using their own first-party data. Portrait Engine is now in public beta and is expected to be available later this summer.

New EU Guidelines Target Tech Giants Over Profiting From Disinformation Ads
New EU guidelines will push tech giants like Facebook and Google to commit to not making money from ads which contain disinformation. The European Commission said on Wednesday that they had tightened their non-binding guidelines in the area. Signatories to the guidelines, which were introduced in 2018, include Google, Facebook, Twitter, and some advertising and tech lobbying groups.

Amazon Will Buy MGM Studios for $8.45 Billion
Amazon said on Wednesday that it will buy MGM Studios for $8.45 billion. The acquisition of the film and TV studios, which produces the James Bond’s films, signifies Amazon’s commitment to original content on its streaming platform, Prime Video. The deal is Amazon’s second biggest acquisition in its history, after its $13.7 billion purchase of Whole Foods in 2017.

Fox News to Make Prime Time Shows Available on Streaming
Fox News said that it would make some of its most popular prime-time shows available on its Fox Nation streaming service shortly after airing live.  The streaming service will feature a new section called “Fox News Primetime All the Time,” which will include opinion programmes such as “Tucker Carlson Tonight,” “Hannity” and “The Ingraham Angle”. The programmes will be available the morning after they air.

Disney+ Say Cost Rise Didn’t Cause Increased Churn
Disney saw little subscriber churn when it raised the price of Disney+ by $1 a month earlier this year.  Disney CEO Bob Chapek said at a JPMorgan conference the company was pleased with the price value proposition Disney Plus still offers consumers. The news clears the way for Disney to make more price increases.

HBO Max to Be Made Available in Latin America
HBO Max is launching in Latin America and the Caribbean. The WarnerMedia owned streaming service will be available from 29 June in 39 territories.

Netflix Looks to Hire Gaming Executive
Netflix is seeking to hire an executive to oversee its expansion into gaming, according to Reuters’ sources. The company has experimented with interactive programming like “Black Mirror: Bandersnatch”, where viewers can dictate the character’s choices. According to one report, Netflix had discussed offering a bundle of games similar to Apple’s online subscription offering, Apple Arcade, as an option.

Sony Chief Says Film Studio is Not Up For Sale
Sony’s chief executive has insisted that the company’s film and TV production studio will remain independent and is not up for sale. This is despite a wave of consolidation in the industry. Analysts say Sony Pictures Entertainment could be worth as much as $30 billion.

UK Culture Secretary Says BBC Must Act to Restore Trust
The UK government’s culture secretary said that the BBC must act quickly to restore public trust. The comments come after a damning report into how the public service broadcaster secured an interview with Princess Diana in 1995. The culture secretary, Oliver Dowden also said that he would look at the structure of the BBC in the wake of the report.

Speedy AVOD Growth is Forecast to Resume in 2021
AVOD expenditure for TV episodes and movies will climb by 144 percent between 2020 and 2026 to reach $66 billion (€54.1bn) across 138 countries, according to a report from Digital TV Research.

Sky Doubles Free Ad Scheme for UK Small Businesses
Sky Media has announced the return of SME100, a £2million support scheme for small businesses, giving them free access to TV advertising. The scheme, which was launched last year during the pandemic, is doubling this year to give small businesses £20,000 worth of TV advertising across Sky Media’s channels. It will also offer them a free 12-month business broadband and phone package from Sky.

Daily Mail Revenues Fall in Difficult Ad Market
The Daily Mail & General Trust (DMGT) reported revenues were down by 12 percent in the first half of its financial year, which ended in March. The decline came largely thanks to difficult conditions in the ad market, with total ad revenues down by 17 percent. 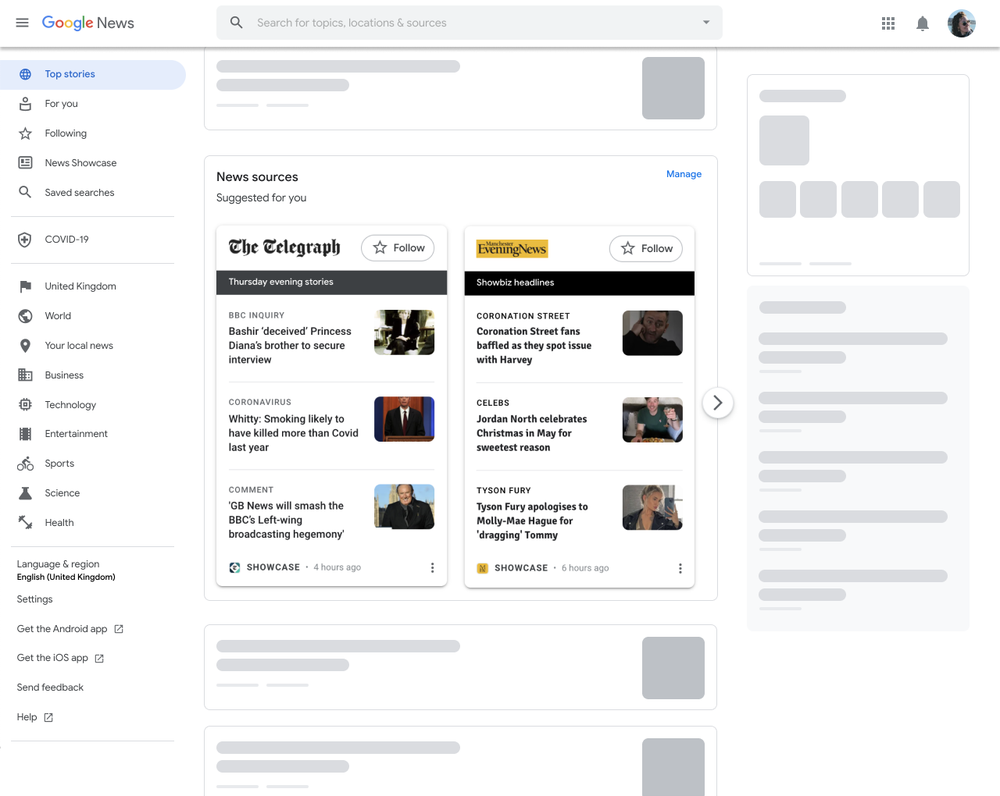 Twitch Adds ‘Pools, Hot Tubs, Beaches’ Category After Brand Safety Concerns
Gaming focussed streaming site Twitch has added a new content category, ‘Pools, Hot Tubs, and Beaches’, following brand safety concerns on the platform. While Twitch has guidelines around overly sexual attire, exceptions are given for real-life streams where swimwear is appropriate. But advertisers became concerned their ads were ending up on risqué content, as ‘hot tub streams’ became more and more popular. Advertisers can now explicitly opt-out of streams which fall within the ‘Pools, Hot Tubs, and Beaches’ category.

Class Action Lawsuit Targets Instagram Embeds
A class action lawsuit has been filed in San Francisco by photographers who post copyrighted material on their Instagram and Facebook pages. The suit states that Instagram and Facebook have enabled infringement of copyright, by allowing publishers to embed these social posts in their articles without asking for permission or paying a licensing fee.

BBC Global News Partners with Taboola
Taboola, a content recommendation platform, this week announced a new deal with BBC Global News which will see it become the publisher’s exclusive content recommendations provider. Taboola Feed, an integrated feed that provides readers with personalised content, will be integrated into BBC.com – the home of BBC News and BBC Sport – in all markets outside the UK, where the publisher is commercially funded.

MDC Partners Shareholder Opposes Stagwell Merger
One of MDC Partner’s largest shareholder has sent a letter to the board of directors opposing the merger it’s agreed with fellow agency holding group Stagwell, according to the WSJ. The shareholder, Indaba Capital Management, described the merger proposal as “conflict-ridden and poorly-structured”, arguing that it favours Stagwell. Indaba, which holds a 12 percent share in MDC, plans to vote against the merger next month.

Omnicom Plans to Return to “Office-Centric” Culture
Holding group Omnicom sent an internal memo this week detailing its plans for returning to office life as lockdown measures ease around the world, according to Campaign. Chairman and CEO John Wren said he expects the company to return to an “office-centric” culture, though he didn’t detail how many days per week employees will be expected to be in the office.

UM UK Launches ‘The Better World Marketplace’
Media agency UM UK this week launched The Better World Marketplace and Directory, a collection of diverse-owned and progressively minded media designed to help buyers find and spend with these types of media brands. The Guardian, Channel 4, Gay Times, Hearst, The Big Issue, Amaliah, Gal-dem and Attitude are among the media brands included in the marketplace, according to Adweek.

Philips Picks Omnicom as Integrated Agency of Record
Global tech giant Philips has picked Omnicom to handle creative, media, and communications duties, an account worth around $300 million according to AdAge. Omnicom beat out Interpublic Group and Havas, as well as incumbents WPP and Dentsu.

Cannes Lions Promises to Engage with DE&I Consultancy
The organisers of the Cannes Lions festival have agreed to work with a specialist DE&I consultancy, following complaints around a lack of diversity within the organisation last week. The row centred around social media posts from Abraham Abbi Asefaw, former co-dean of Cannes Lions’ learning programme the Roger Hatchuel Academy. Asefaw detailed how he was removed from his position, resulting in an all white list of Deans at the Cannes Lions school.

That HAS to create some change. However, you can’t help but sit with this feeling of why it had to come to this point in the first place. Going public like this is actually quite out of character for me, but I guess everyone can be pushed. https://t.co/a4vUqMr9yK

MSQ Sees 16.5 Percent Revenue Growth in 2020
Agency group MSQ released its financial results for 2020 (its financial year ended on February 28th this year), showing that revenues were up 16.5 percent despite the pandemic. But this growth in reported revenues was driven by acquisitions – organic revenues were flat year-on-year.

Has Adland Lived Up to Its Promises One Year After George Floyd’s Murder? read more on VideoWeek

Can Contextual Targeting Step In for IDFA in Mobile Gaming? read more on VideoWeek