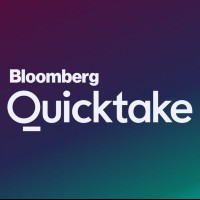 Like many other publishers who have seen the pressures facing the digital ad market in recent years, Bloomberg has shifted its strategy towards subscription revenues.

Since 2018, Bloomberg has run a metered paywall on its website, limiting users to a small number of free articles each month, and 30 minutes of watch time for Bloomberg’s live TV channel each day.

But in the OTT world, Bloomberg is still relying entirely on ad revenues. It’s OTT service Quicktake, which began life as a Twitter page before launching as a streaming service last year, is completely free and ad supported. Not only is Quicktake working as a standalone product and drawing substantial audiences (7.4 million viewers per month), but it’s also demonstrating how publishers’ free and paid services can feed back into each other, encouraging more subscriptions to Bloomberg’s paid products.

Quicktake started life in 2017 as a partnership with Twitter (where it was originally named TicToc, before rebranding for obvious reasons).

Bloomberg’s Quicktake page on Twitter is designed to be a modern take on the 24 hour news service model. Instead of a constant live feed of content, Quicktake publishes regular short clips (usually 2-3 minutes long) covering global events as they unfold. Since so many people get news primarily from social networks, Quicktake aims to capture those audiences with made-for-social video content.

“Bloomberg TV is really for our core financial, professional audience, and Quicktake is for a broader set of global readers. It’s still business professionals and business-minded consumers, but for whom perhaps the weeds of the markets aren’t quite so interesting,” she told VideoWeek.

Last year Bloomberg spotted an opportunity to create something more akin to a traditional 24 hour TV news channel, but made for the streaming world.

“We’ve been watching trends with consumers cutting the cord and moving to streaming, and we’ve seen some of the traditional players having a harder time moving towards streaming full-force because of their more traditional broadcast or cable structures, and existing distribution agreements,” explained Cowgill. “We thought there was a real opportunity to move fast and create something big now.”

Cowgill said Quicktake wanted to adapt the 24 hour live news format to the social-first world. “We know that our audience sees breaking news on their phones first via the social platforms,” she said. “So what we need to be on the big screen changes – it’s more about providing context to breaking stories, and looking deeper into where those stories are going.”

To fill a 24-hour live stream, Quicktake has had to shift towards producing longer formats and shows specifically for the OTT channel. But there is still some crossover with the Twitter page. Cowgill said that short ‘made for Twitter’ segments responding to breaking news stories will often slot neatly into the OTT feed, acting as a bulletin within a longer programme.

Getting a new streaming service off the ground in an increasingly crowded market isn’t easy, and Cowgill says that already being established on social platforms gave Quicktake a running start.

“Having that base audience on Twitter and YouTube was extremely valuable,” she said. “We were able to market the channel to those audiences, and they already knew the brand. And YouTube also acts as a distribution partner for our linear channel too.”

Bloomberg also ran a marketing campaign to promote the channel, and works with the various OTT platforms to understand which tools they can use to promote their live events within those platforms.

Bloomberg’s experience in the live TV space has also helped with the launch. While Bloomberg has invested significantly in Quicktake (with around 100 dedicated staff), it’s also been able to borrow resources from the broadcast channel.

“It’s certainly a huge advantage that we have that infrastructure in place around the world, the studio space, the capacity and capabilities to shoot a live channel, and our broadcast journalists, reporters, and analysts,” said Cowgill.

Cowgill says Bloomberg has opted to make Quicktake entirely ad-supported in order to sidestep the competition for consumers’ expendable income. “Consumers have so many choices of where to spend their money on streaming services,” said Cowgill. “We want Quicktake to be omnipresent, so by being free and ad-supported we make sure we’re not part of that choice, we can reach all audiences.”

Quicktake runs pre- and mid-roll ads on its OTT channel, as well as pre-rolls ads and platform-specific formats on the social platforms. Inventory is sold both through direct buys and programmatically.

For big advertisers, Quicktake would usually pull together packages which span across all these different formats. But some might also buy packages which include Bloomberg TV inventory too, giving access to two separate (but related) audiences.

But as much as Quicktake draws on Bloomberg’s existing products, it also helps feed back into them too.

“Every piece of our ecosystem reinforces the whole,” said Cowgill. “So when someone subscribes to Bloomberg.com, they will see Quicktake referenced there and might come and watch via our app. And if someone discovers us via Quicktake, they might ultimately come to want a Bloomberg subscription. I think all of those pieces can work together and feed back into each other in either direction.”