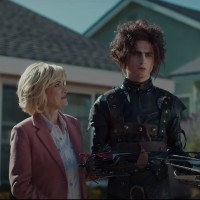 Running a Super Bowl ad is always something of a daunting task for any advertiser, given the need to justify the massive investment by standing out amid a crowd of other expensively produced spots. And this year’s Super Bowl has had the added pressure of picking the right tone for the moment, given the highly unusual circumstances.

Some Super Bowl regulars sat out this year’s event entirely. Budweiser for example chose to donate the money it would have spent on airtime to the Ad Council and COVID Collaborative’s vaccine awareness initiative. Others, like hot sauce brand Franks RedHot, ran social campaigns adjacent to the event, as a cheaper alternative to forking out for broadcast ads.

From the advertisers who did stick with this year’s event, we saw the usual mix of celebrity appearances, pop culture references and comedy, as well as some genuine innovation. Here is VideoWeek’s pick of this year’s ads:

It’s often the case that Super Bowl ads lean a little too heavily on pop culture references, simply referencing a well loved song, TV show or movie, and leaving nostalgia to do the heavy lifting.

This spot from Chevrolet has enough originality to make it work, with Timothée Chalamet well cast as the son of Johnny Depp’s much-loved character Edward Scissorhands. And the ad remembers to feature the product in its advertising – which isn’t always the case for these sorts of ads.

Reddit’s five second ad was certainly one of the most inventive at this year’s Super Bowl. Buying just five seconds of airtime may have been a cost saver for Reddit, but the shorter spot also worked in the ad’s favour. It encouraged users to interact directly with the ad, either by pausing to read the message flashed up on screen, or searching it out on the web.

The ‘hacking the system’ feel of the ad also fits neatly with the recent story of Reddit users’ disruption of Wall Street (which was referenced within the text of the ad).

A well executed funny ad is always a solid bet for the Super Bowl. And perhaps that was the case this year more so than usual, since audiences have been inundated with more serious, emotional spots across 2020.

General Motors’ ad plays was one of the best, playing to Will Ferrell’s strengths and letting his unique style of comedy set the tone for the spot. And the ad has lent itself well to social media follow ups, with Audi Norge, Norway’s tourism board, and even Norway’s Prime Minister Erna Solberg posting responses.

Vegan milk brand Oatly’s ‘Wow No Cow’ ad divided audiences – some found it funny, others were bemused. But this divide generated conversation on social media – rarely a bad thing for a Super Bowl ad.

And like Reddit’s ad, Oatly’s spot was cost effective. The creative was recycled from an earlier campaign run in Sweden, which aired nationally but was then banned from TV after Oatly was sued by the Swedish dairy lobby.

Use of user-generated content in the ad was minimal (a selection of photos of the new born babies were shown, rather than any footage being used). But it still takes a certain amount of daring to leave any element of a Super Bowl ad until hours before the game. And the trick pays off, creating a neat little memorable moment within the spot.