Bertelsmann is reportedly looking for around €3 billion in exchange for its full 48 percent stake in M6. RTL said in a statement responding to the reports that it reviews strategic options on an ongoing basis, adding that there is a strong case for consolidation in the European broadcast sector (a view publicly held by Bertelsmann CEO Thomas Rabe).

Vast Majority of Businesses Aren’t Ready for Post-Cookie Era says IAB Europe
A majority of businesses surveyed by IAB Europe said they aren’t fully prepared for the removal of third-party cookies on Google’s Chrome browser at the start of next year, despite the fact that most recognise the issue as a priority. When asked to rank preparedness on a scale of 1-5 (5 being fully prepared, 1 being not prepared at all), over 70 percent said three or lower. 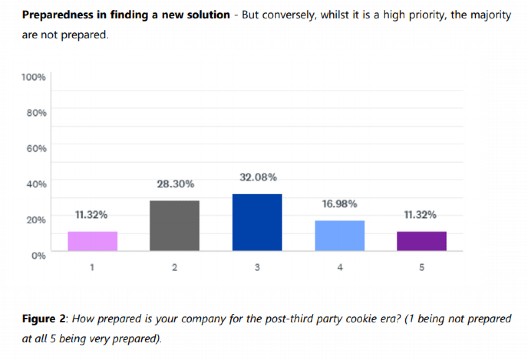 The results were presented in IAB Europe’s new ‘Guide to the Post Third-Party Cookie Era’, designed to help brands, agencies, publishers and tech intermediaries prepare for the upcoming change. “With less than 12 months to go until third-party cookies are fully deprecated, now is the time for every company within the digital advertising ecosystem to work together to deliver the solutions that are outlined in the IAB Europe Guide,” said Helen Mussard, CMO of IAB Europe.

DoubleVerify says ParrotTerra operated similarly to other SSAI fraud schemes, generating fake CTV inventory across a number of apps, IP addresses and devices and using fake SSAI servers to spoof legitimate users. But DoubleVerify says the scheme was unique in its scale, creating up to 3.7 million device signatures per day before it was blocked.

And DoubleVerify warned that ParrotTerra demonstrates evolving tactics from fraudsters, since it was able to generate fake impressions at a much faster pace than other similar schemes.

Magnite to Acquire SpotX for $1.17 Billion
Supply-side platform Magnite announced this morning it has agreed a deal to acquire sell-side video platform SpotX from European media group RTL for $1.17 billion in stock and cash, subject to regulatory approval. Magnite says the acquisition will make it the largest independent CTV and video advertising platform. Read the full story on VideoWeek.

Walmart Buys Thunder Industries
US supermarket chain Walmart has acquired Thunder Industries, an ad tech company which automates creation of digital ads, as Walmart continues to invest in its advertising capabilities. Walmart will use Thunder Industries’ tech to create a self-serve tool which will help advertisers create ads to be run across Walmart’s digital properties, according to the Wall Street Journal.

Facebook Plans Own Data Notice to Counter IDFA Consent Screen
Facebook is planning its own notice explaining how it collects and uses data, which will be paired with Apple’s new consent notice for use of its IDFA advertising identifier which is due to roll out in Spring. Facebook hopes its own data notice will encourage more users to let the social platform continue using the IDFA.

Google Accounts for Nearly Half of All Digital Advertising says WARC
Google’s parent company Alphabet takes in just under fifty percent of global online ad spend, according to analysis from WARC, which found that YouTube and Google Search are set to be the two most in-demand platforms for advertisers this year.

AppLovin to Acquire Adjust
Mobile app business AppLovin has acquired app measurement business Adjust for an undisclosed fee – reported to be around $1 billion by Bloomberg. “We have worked closely with the Adjust team for years and we’re thrilled to have the opportunity to team up with them,” said Adam Foroughi, AppLovin co-founder and CEO. “Adjust’s product-first approach to the attribution and analytics space is comparable to how we built AppLovin, and exceptional combinations are born from similar objectives and culture.”

Jeff Bezos to Step Down as Amazon CEO
Jeff Bezos made the surprise move of announcing he plans to step down as CEO of Amazon later this year, to be replaced by Andy Jassy, currently CEO of Amazon Web Services. Bezos’ announcement came as Amazon announced bumper Q4 results, with Q4 revenues up 44 percent to $125.56 billion.

IPONWEB Granted TAG Platinum Status
Ad tech company IPONWEB this week announced it has been awarded TAG Platinum status by the Trustworthy Accountability Group (TAG), the highest level of certification. This means IPONWEB has achieved all four TAG certifications across the areas of fraud, malware, brand safety and piracy.

Germany’s Regional Advertising Ban Questioned in EU Courts
A ban on national broadcasters running regionally targeted ads in Germany may be illegal under EU law, according to the European Court of Justice. The issue may stem from the fact that the same restrictions don’t apply to internet advertising.

Ofcom Calls for Evidence on PSBs and UK Production Sector
UK communications regulator Ofcom has called for evidence on the relationship between public service broadcasters (PSBs) and the independent TV production sector. Ofcom says it is seeking evidence on whether any rule changes might be needed to further benefit viewers, to better support the financial sustainability of producers and commissioners, and secure the diversity and attractiveness of the sector.

Chinese SVOD Services Dominate Locally, but Unlikely to Grow Overseas
SVOD services in China are set to overtake traditional broadcasters as the biggest spenders on video content in 2025, according to research from Ampere Analysis. But while this content is proving popular abroad, China’s big three of iQIYI, Youku-Tudou and Tencent Video will likely struggle to compete with globally established brands like Netflix and Amazon Prime Video overseas, according to Ampere analyst Peter Ingram. 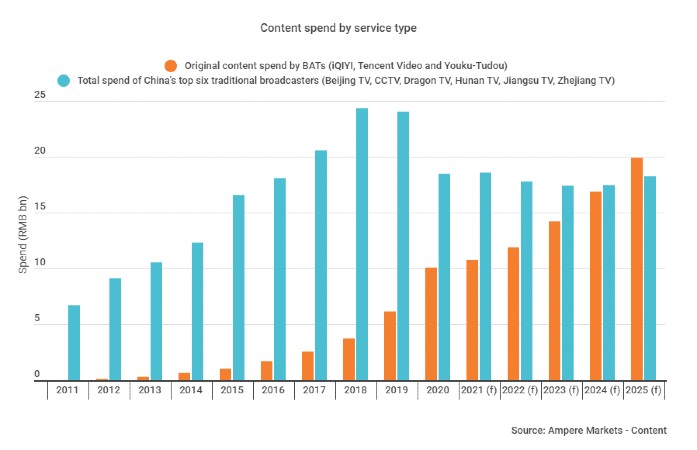 NYT Subscriptions Make Up for Stuttering Ad Revenues
The New York Times beat analyst expectations in its Q4 financial results this week, with revenues up 0.2 percent to $509.4 million. This slight growth through the pandemic period was driven by the strength of the NYT’s subscription offering, as subscription revenues grew 14.7 percent to $315.8 million. Ad revenues meanwhile fell 18.7 percent to $139.3 million.

Snapchat Shares Fall as Company Warns of IDFA Impact
Snap shares fell ten percent this week as the company warned in an earnings call that ad revenues will likely be hit by upcoming changes to Apple’s IDFA identifier. This fall came despite the fact that Snapchat reported very strong revenue growth, with total revenues up 62 percent year-on-year to $911 million.

TikTok Joins More CTV Platforms
Social video-sharing app TikTok continued its push into CTV this week, making its TV app available on Google and other Android TVs in the UK, France and Germany. TikTok first released its app on connected TVs last year through a partnership with Samsung. 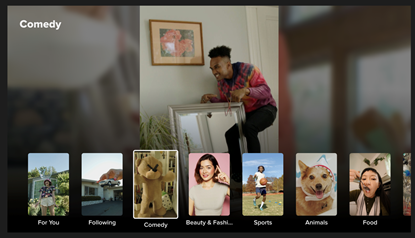 Instagram Works on ‘Vertical Stories’ Feature
Instagram confirmed this week it is working on a ‘vertical stories’ feature, which would let users scroll vertically through Instagram Stories rather than tapping to cycle through them. This would give Instagram Stories more of a TikTok-style feel, and Instagram already uses vertical scroll for it’s TikTok clone Reels.

Publicis Sees Narrow Net Revenue Fall in 2020
Holding group Pubicis saw only a slight fall in its full year net revenues despite the pandemic last year, with net revenue down just one percent year-on-year. The group saw a return to growth in its US business, with organic revenue growth at 0.5 percent in Q4, driven by 5.5 percent growth from its Epsilon data unit.

GroupM Unveils Data Ethics Tool
WPP’s media arm GroupM unveiled its new Data Ethics Compass this week, a tool designed to help marketers evaluate the legality and morality of using given datasets. “Our Data Ethics Compass provides clients a consistent approach on how best to navigate ethical risk and prioritize and respect the privacy of people on the other side of the screen,” said Krystal Olivieri, GroupM’s global SVP for data strategy and partnerships. “This new capability demonstrates GroupM’s belief that even though you have access to certain data, it doesn’t mean you should always use it. We have an obligation as an industry to re-establish an appropriate balance.”

WPP Gets First-Access to TikTok Tools
Agency holding group WPP will get early access to new advertising products on video-sharing app TikTok, as well as exclusive opportunities to work with TikTok creators, thanks to a new deal inked between the two businesses. “I am delighted that we have formed this global partnership, a first in our industry, and look forward to working with TikTok to ensure our clients continue to benefit from what its platform has to offer,” said WPP chief executive Mark Read.

The Richards Group Cuts 15 Percent of Staff
The Richards Group announced it is cutting around 15 percent of its staff this week, affecting roughly 100 people, as a cost-cutting measure. The layoffs come months after a number of clients cut ties with the agency, after founder Stan Richards drew intense criticism for describing a campaign concept as “too black”.

WFA Crowns Marc Pritchard Global Marketer of the Year
Advertiser trade group the WFA has crowned P&G’s chief brand officer Marc Pritchard as its ‘Global Marketer of the Year’. “In many ways he has set the standard for how marketing can drive both social change and business success. In doing so, he has helped to inspire an entire industry to improve,” said Raja Rajamannar, WFA president and chief marketing and communications officer of Mastercard.

Nestlé Puts UK Media Account Under Review
Nestlé is reviewing its UK media account, worth around £63 million and currently held by Zenith, according to Campaign.

tmwi Appoints Matt Morgan as Managing Director
Warwickshire-based marketing agency, tmwi, has appointed a new MD, Matt Morgan, as it actively pursues growth opportunities in the market at this time. In his role as MD, tmwi Ltd, Matt will lead client services and planning and strategy whilst growing the agency’s team and client base and focusing on product and capabilities development.

NVF Roadmap 2021: What to Expect, read more on VideoWeek

Magnite to Acquire SpotX for $1.17 Billion, read more on VideoWeek