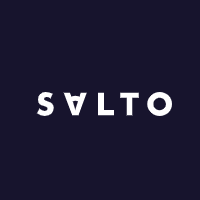 Salto, a joint venture streaming service from French broadcaster TF1, M6 and France Télévisions, this morning officially launched to the public. The new paid subscription service, first announced in 2018, is designed to complement rather than replace each individual broadcaster’s existing on-demand services. But the three broadcasters hope that their combined product will be better placed to compete with the international giants like Netflix, Disney+ and Amazon Prime Video.

Salto offers both live linear channels and on-demand box sets and films. The live channels will include the three broadcasters’ regular linear channels, as well as several thematic channels. Salto is pitching itself fairly heavily on its selection of French content, though it will also host a number of international shows and films, some of which will be exclusive to Salto in France.

The service also hopes its recommendation engine will help set it apart. Salto’s recommendations will be partly powered by a team of editors who will make judgements on which shows and films are likely to be appreciated by the same audiences.

Salto’s on-demand content will be ad-free (with basic subscriptions costing €6.99 per month). But the linear broadcasts will run ads, as they would on TV. As such, Salto could boost the reach and value of campaigns run on each of its founders’ traditional TV offerings.

A big shakeup for the French market

As a collaboration between three of France’s biggest broadcasters, Salto is significant as a fightback against the international streaming giants. Across Europe, we’ve seen similar initiatives where local broadcasters have teamed up, believing that their combined scale gives them a better chance of staying competitive – such as Britbox in the UK, Joyn in Germany, and LOVEStv in Spain.

But there are also implications for France’s telcos. As VAN has previously reported, IPTV in France is unusually strong, which means the telcos play a large role in the connected-TV sphere.