How Do the Industry’s Forecasts for 2021 Compare to Each Other?

How Do the Industry’s Forecasts for 2021 Compare to Each Other? 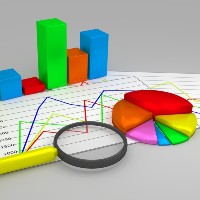 As economies around the world begin to reopen and lockdown measures relax, we will start to get a better idea of the long term impacts on the industry from the COVID-19 pandemic. But there are nonetheless still huge levels of uncertainty. How will advertisers respond to economies reopening? How quickly will the global economy recover? And will the relief from lockdown just be temporary?

There have been plenty of forecasts released over the past few months mapping out how 2021 is shaping up for the industry, but the constant stream of data can make it difficult to get a clear picture of how aligned these projections are. VAN has picked out the major industry forecasts to compare how industry experts think the ad industry will fare in 2021:

GroupM’s recently released ‘This Year, Next Year’ report predicted ad spend will grow 5.6 percent, after dropping 11.9 percent this year. If you exclude the impact of US political ad spending (which will provide a substantial boost to US ad spend this year), ad spend is expected to grow by 8.2 percent next year. 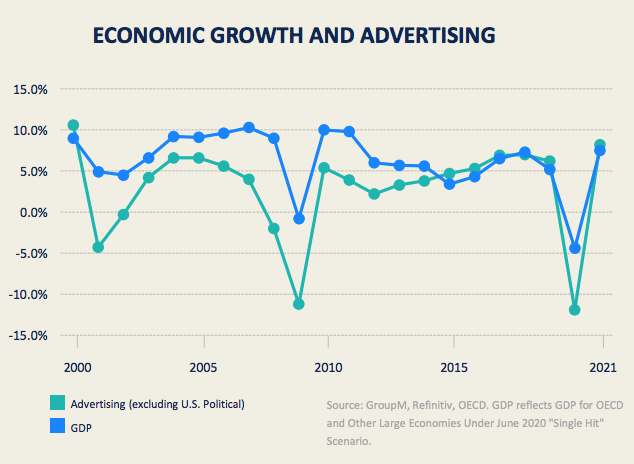 In the UK specifically, ad spend is forecast to grow by 13 percent in 2021, after falling 13 percent this year.

GroupM believes that TV advertising will see a sharp fall this year of 17.6 percent (excluding the impact of the US election), with a slight recovery next year of 5.9 percent growth. Digital advertising meanwhile is forecast to dip a little this year, dropping by 2.4 percent, then returning to growth next year of 11.3 percent.

IPG Mediabrands’ MAGNA predicts a swifter V-shaped recovery. MAGNA forecasts that global ad revenues will be down by 7.2 percent this year, and will return to growth of 6.1 percent next year (which will still leave total ad spend in 2021 lower than it was in 2019).

MAGNA’s forecast doesn’t break out global changes to TV and digital revenues. But for the US specifically, the media buyer believes digital growth will remain positive, dropping to 2.2 percent growth this year, and then rising to eight percent next year. For the TV market, cyclical events are expected to have dramatically different impacts for local and for national TV broadcasters. National TV broadcasters are predicted to see 4.3 percent growth in revenues next year thanks to the return of major sporting events like the Olympics. But for local broadcasters, the boost to revenues provided by the elections will mean ad spend only declines a little this year (2.4 percent) but then drops dramatically next year (14.5 percent).

The Advertising Association/WARC Expenditure Report, which looks at the UK specifically, forecasts that total UK ad spend will be down 16.7 percent this year, and will then rise by 13.6 percent in 2021.

The Expenditure Report, unlike others, predicts sharp falls in every category this year, including digital. Online display revenues are expected to drop by 12.7 percent this year, but then will return to strong growth of 17.3 percent next year. This would bring digital ad spend back above 2019 levels.

TV ad revenues meanwhile are forecast to fall sharply, dropping by 19.8 percent this year. But the report says they will rebound quickly too, rising by 15.0 percent next year. This quick recovery will be helped significantly by ad spend on video on-demand platforms, where revenues are predicted to grow 21.9 percent next year. 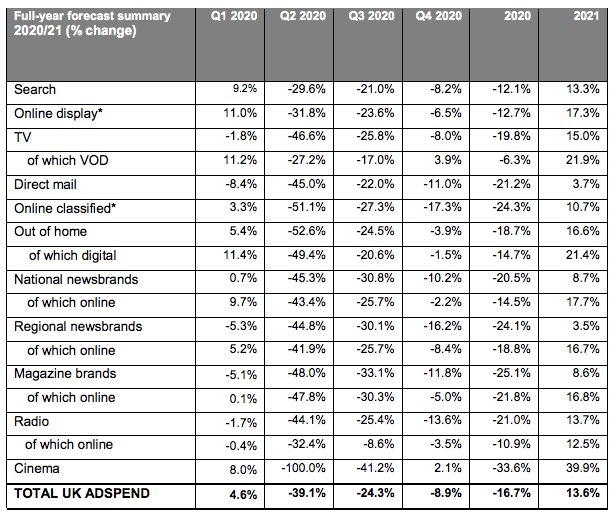 The IPA Bellwether Report predicts a very muted recovery for UK ad spend in 2021, with revenues up just one percent, following a 13.7 percent decline in expenditure this year. The IPA predicts more robust growth in the years to follow.

The trade body noted that there is an unusually high degree of uncertainty for the year ahead, but most of the risks it sees are “tilted to the downside”. One of these risks is the ongoing uncertainty around Brexit, and the impact that will have on the British economy and ad spend.

The IPA’s report doesn’t break out specific changes to different channels. But it does giving promising indicators for TV. For the Bellwether Report, the IPA surveyed marketers about where they expect their budgets to increase over the next 12 months. And the ‘main media’ segment (which covers big ticket campaigns on TV, cinema and radio) saw the strongest forecast, with a net balance of 8.4 percent of marketers expecting to see main media budgets revised upward.

IAB Europe: All European markets will return to growth

Without giving specific figures, IAB Europe predicts that ad spend in all European markets will return to growth in 2021, though this won’t be enough to return overall European spend to its 2019 levels.

Dr. Daniel Knapp, chief economist at IAB Europe, said that it will likely be three years before total ad revenues in Europe return to their pre-pandemic levels. But Knapp said that digital spend should recover much faster, taking around 12-14 months to recoup losses from the pandemic. 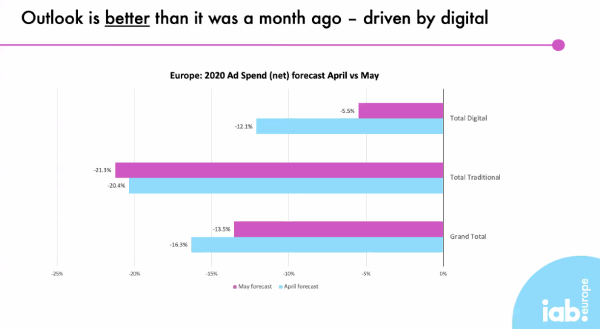 Fitch: US ad recession will linger into 2021

Unlike the others listed here, US ratings agency Fitch doesn’t expect US ad spend to return to growth next year. While the report doesn’t give specific figures, the agency predicts that ad spend will contract in the mid-to-high single digit range this year, and will fall again in the low-to-mid single digit range next year.

Fitch doesn’t specify how it expects each media channel to fare next year. But the agency predicts that television revenues will feel carry-over effects in 2021, as the lack of sports and other live programming this year could have longer-lasting effects on the cost of impressions on TV. However, the return of postponed live sports next year could spark a healthier recovery for TV revenues, assuming they go ahead as planned.

MoffettNathanson: Full recovery in US ad market in 2021

MoffettNathanson, an independent media research company, gives one of the most positive forecasts, predicting that total US ad spend will return to pre-pandemic levels some time in 2021.

The analyst expects total US ad spend to be down by 8.6 percent this year, with TV ad revenues down 11.3 percent and online ad revenues down three percent. But MoffettNathanson forecasts that the strength of the social platforms, as well as the growth of ad-supported streaming services, will spur a full recovery in total spend next year. “Given both the shifts in consumer behaviour to e-commerce and the ability of digital to produce more targeted and efficient results, this snap-back is essentially fuelled by a return to growth in digital spending at the two largest ad platforms (Alphabet and Facebook),” said co-founder Michael Nathanson in a note to investors.

But while MoffettNathanson has an unusually positive forecast for ad spend as a whole, its outlook for television is unusually negative. The researcher expects TV ad revenues to remain largely flat after falling this year, predicting that even as far ahead as 2024 TV revenues will sit at $66.9 billion, nearly $10 billion lower than they were in 2019.