What Ever Happened to the AR Revolution?

What Ever Happened to the AR Revolution? 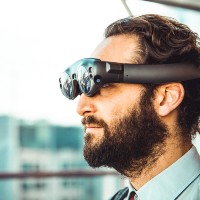 Over the past few weeks, details have been surfacing around Apple’s long rumoured pair of augmented reality (AR) glasses, which are expected to be officially announced later this year.

But you’d be excused for not getting too excited by the rumours. We’ve seen a number of similar products come and go, promising to transform the way we live our daily lives by projecting an augmented reality layer on to the world around us.

But so far these promises have failed to take off. Google Glass never took off amongst consumers, and has pivoted to focus on enterprise use cases with Google Glass Enterprise Edition. And Magic Leap, in development since 2010, didn’t release a product until 2018, and then only sold 6,000 units within its first six months according to The Information.

It might be tempting to consign the AR dream, where the entire world around us is enhanced and transformed by AR via a wearable device, to the dustbin. But it might be too early to do so.

Firstly, it’s important to state that while AR might not yet be living up to its full potential, it has stayed around and people continue to use it in different ways.

Jack Maddalena, founder and sales director at VRCraftworks, a UK-based VR and AR app developer, said that AR filters within social platforms like Facebook, Instagram and Snapchat can generate billions of impressions.

“One of our filters has got 20 million impressions, and that’s from an Instagram account that’s got 4000 followers,” said Maddalena. “So the growth of these filters is all organic.”

Maddalena added that while it may not grab headlines, AR is seeing interesting B2B use cases too (through products like Google Glass Enterprise Edition).

“It’s used on manufacturing lines, to help workers do the right thing at the right time. And it’s used in areas like construction too, to help visualise how a building will look before it’s built,” said Maddalena.

And Julie Ask, vice president and principal analyst at Forrester, a market research company, said that AR is proving its value in marketing too. Brands including L’Oreal and Ikea use AR to help consumers visualise how products will look before they buy them, and Ask says while consumer adoption of these tools still isn’t high, they drive results nonetheless.

“There’s some data that says consumers are more likely to browse more categories of products, especially with things like cosmetics, with AR,” she said. “You’ll look at more colours, more varieties, and brands see fewer returns and higher conversion rates.”

The high adoption of AR on social platforms (as well as the popularity of AR-based game Pokemon Go in 2016) demonstrates that in the right use cases, the tech can prove popular with consumers.

But those VAN spoke with cited a number of factors which have held back the more ambitious AR products and apps, such as Google Glass and Magic Leap.

Firstly, we’re only just reaching the point where it’s becoming technically feasible to accurately project an AR layer on to the real world.

In order to put relevant content onto a relevant object in the real world, or float in naturally in the right environment, you need a lot of detail and accuracy in your locational information,” said VRCraftworks’ Maddalena.

“But there are some companies doing very clever things at the moment with computer vision, and improving GPS to get its accuracy down to the centimetre or millimetre level,” he said. “Once you’ve got that accuracy, you can put a virtual layer on top of everything.”

And these more ambitious projects need a lot of computing power behind them, often making them prohibitively expensive. Maddalena pointed to Microsoft’s AR product HoloLens. The first edition wasn’t particularly powerful according to Maddalena, and while the second version is a big improvement, it costs $3,500.

Eleftheria Kouri, an AR/VR research analyst at technology research company ABI Research, said that the lack of barriers to entry have helped more gimmicky products like AR filters take off in a way that other apps and products haven’t. These filters are free, they’ve been able to piggyback off the social platforms’ large audiences, and they don’t require users to download a new app or buy a new device.

As technology develops, bringing down the costs and barrier to entry for AR glasses and similar products, Kouri believes we’ll see more consumer adoption. And that Apple’s upcoming smart glasses could help push forward the market.

“The anticipated launch of Apple’s smart glasses will play a catalytic role in educating more users and unlocking opportunities for AR applications, such as hands free access to mobile notifications and streaming of broadcast content,” she said. “And by introducing AR smart glasses and applications in physical stores, Apple will help assist in educating users and allow them to familiarize with the technology,” she said.

“All in all, at the current stage, the consumer market is not mature enough,” said Kouri. “But the market has developed significantly over the past three years. Better marketing strategies and a focus on consumer education about AR, in combination with the anticipated technological advancement in hardware and improvements in software, will help the AR consumer market to grow.”

But there are still other challenges which AR will have to overcome if it is to break into mainstream daily usage.

Firstly, there’s an element of wariness around AR glasses in particular, given how they constantly scan (and potentially record) the world around them.

“One of the issues with the Snap Glasses (which didn’t use AR, but did have a camera attached) and the original Google Glass is people don’t like the idea of being filmed,” said Forrester’s Julie Ask. “If I’m filming someone with my camera it’s pretty overt, but that’s not the same with glasses.”

At a time when consumers are increasingly sensitive about the prospect of tech companies or government agencies spying on them, any product that automatically “sees” everything the user does is likely to encounter major privacy problems.

And AR glasses will also face the more fundamental challenge of making themselves useful without being annoying or intrusive.

“I have a pair of swim goggles with an in-goggle display of how fast I’m swimming, my stroke count, and things like that,” said Ask. “But it creates a bit of a blind spot in your vision. In a pool that’s not much of a problem, the worst I can do is hitting my hand on a lane line, or crash into a person coming the other direction. But there’s definitely a safety issue of how much vision is obscured if you’re in motion.”

That’s not to say that AR wearables can’t be done well. Ask suggested that smart glasses’ AR features might be turned on only for specific instances.

“You can imagine scenarios similar to how you currently go to a museum and get an audio tour,” she said. “You could get something like that for AR, where you turn it on for specific instances. So maybe you walk up to a certain exhibit, and the glasses scan a QR code and then display some relevant information.”

Will advertising have a role to play?

If smart glasses do take off, it would be a tempting new space for advertisers to try to reach consumers. But any AR product which projects intrusive ads over a user’s field of vision might be equally likely to put off potential buyers.

Ask said that any sort of location-based advertising which interrupts consumers going about their business risks doing more harm than good.

“I’ve worked in mobile for a long time, and I remember people talking ten or fifteen years ago about a future where you’re walking past a Starbucks and you get a message on your phone saying ‘Come on in, it’s hot outside, get 10 percent of a Frappuccino!’,” she said. “But that just never materialised because it would be so annoying!”

ABI Research’s Eleftheria Kouri agreed. “Immersive advertising will be a challenge, because it may affect user experience/immersion in an app, or pose safety risks,” she said. “In addition, location based advertising in private properties and public places will require new policy regulations and legal frameworks to ensure privacy. Advertising in AR applications will generate privacy concerns, because AR apps will collect rich data and information about users and the surrounding environment.”

But that’s not to say there won’t be opportunities for brands within AR. Kouri said that if AR becomes more commonplace, the same marketing uses we see today (where users can visualise and try on products before they buy them) will become more popular.

And VRCraftworks’ Maddalena said AR could be used to enhance the ads which consumers already see out in the real world. “Instead of having a normal billboard, you could have something more interactive and engaging, which just creates a better experience for consumers.”