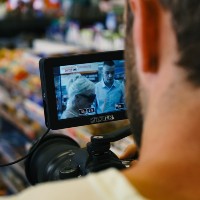 While many brands have responded to the pandemic by pausing or scaling back their large-scale TV ad campaigns, a number of advertisers, both large and small, have seen it as an opportunity to advertise on TV for the first time.

For some categories, like brick-and-mortar retailers and car manufacturers, lockdown measures around the world have led to a sharp drop in sales, making cost-cutting necessary. But for those with the means to spend, the pandemic has inadvertently created uniquely strong conditions for advertising on TV. The overall drop in demand means prices for TV ads are unusually low. Audiences are large, with consumers watching more TV while they are stuck indoors. And as VAN reported last week, many broadcasters are being very active in giving extra help and support to brands interested in advertising on TV.

Some brands are seeing more demand than ever, specifically due to the lockdown, and advertising on TV gives them a way to get their message across to a large audience.

TikTok, the ever-growing video-sharing app, has seen strong growth in usage during lockdown, and has chosen this time to launch its debut TV ad in the UK. The company is using TV to demonstrate TikTok’s appeal beyond its traditional Gen Z user base.

“We felt like it was the right piece of content and also the right moment to experiment with putting a TV commercial out in the UK,” said Jana Ulaite, TikTok’s head of brand and partnerships marketing. “One of the reasons for that is because TV is one of the places where families come together – and with families coming together on TikTok more and more we felt that TV gave us a great channel to really show and celebrate that intergenerational content that we are seeing.”

Some other smaller brands have used TV to help launch entirely new innovative products created in response to the pandemic. E.L.M Legal Services, a Bristol-based legal firm, has launched ‘Web-Cam Wills’, a product which lets users create wills over webcam-based meetings. The firm worked with ITV to run a TV campaign advertising the service.

Vas Touronis, COO at MyOnlineTherapy, a UK-based virtual psychology clinic, said his company had already been planning to run their debut campaign in May. When the lockdown measures came in, the clinic reviewed whether it wanted to proceed with its plans – but with demand increasing during lockdown, Touronis said it was a fairly straightforward decision.

“We’re an online therapy service, which is the only option at the moment for many with mental health issues, so it didn’t make sense to pull back on our plans,” he said. “We saw that lockdown would increase the need for mental health service, and it made perfect sense to go ahead with our plans for TV.”

Meanwhile Papier, an online stationery, greetings cards and gift retailer, decided very quickly to run its first TV campaign, without previously planning to do so. Sophie Agar, brand and marketing director at Papier, said her brand had considered running a TV campaign last year, exploring the idea with a number of agencies and broadcasters, but ultimately decided against it. But when after the lockdown measures came into effect, Agar said she was contacted by almost all of those she’d previously talked to, asking whether Papier would be interested in advertising on TV while prices were low.

“We definitely got a lot of outreach, and that was helpful for understanding what was out there and whether we where we could get a good deal on TV,” said Agar.

For those VAN spoke with, one of the major challenges was sorting out creative while adhering to social distancing measures.

“We decided to take the plunge with TV, but we didn’t have any creative to work with,” said Papier’s Agar.  “So we had to engage an agency and our media buyer all very quickly, and making an ad in lockdown obviously had a lot of challenges.”

MyOnlineTherapy’s Touronis said his company had to rely on stock images and footage for its ad. But he said the company is very happy with the end result, and has had very positive feedback overall.

And while the creative aspect is certainly a challenge, there is a lot of help available for those who need it, with agencies and broadcasters keen to attract as many new advertisers on to TV as possible.

“We’ve seen a lot of flexibility, both from the agency side and the broadcasting side,” said Touronis. “You can book spots just a couple of days before you want to start. And it’s been very helpful for a new business like us, to help us start on TV.”

A chance for TV to prove its value

With all this extra help available, and prices as low as ever, the lockdown is proving a useful time to test out TV. Papier decided against TV last year as it was still something of an unknown for the company, but now that costs are lower, the risk is smaller.

And if TV can prove its value, these first-time TV advertisers could stay with TV for the long-term.

“We’re trying to understand how impactful TV is, and what sort of return we can get on it,” said Papier’s Agar. “Obviously with these reduced costs, if we see great results it will definitely make us think about running more campaigns. But when costs increase, we need to think about whether those costs are still justified.”

So far, for Papier, the results have been promising. “For us, the campaign definitely has to deliver on direct response, but we do know there will be a long term brand impact,” said Agar. “We’re seeing clear spikes in traffic when ads are airing, and we’ve got a strong attribution model that’s helping us understand what TV is driving.”

MyOnlineTherapy’s Touronis said his company is also monitoring results carefully, to judge whether they’ll stay on TV in the long run.

“Of course we’ll look at the costs and how they’ll evolve post-lockdown, and we’re going to review our plans after June,” he added. “But we’re having a good first experience with TV right now, so we think this will probably be a long-term commitment.”