Esports Coverage is Increasing, but It’s Not Creating New Fans… Yet

Esports Coverage is Increasing, but It’s Not Creating New Fans… Yet 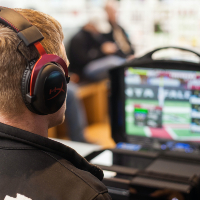 The global lockdown caused by the coronavirus pandemic seems to have inadvertently created prime conditions for esports to reach a wider audience.

With so many people locked indoors, general consumption of media is rising fast. Nielsen estimates that total media consumption could rise by as much as 60 percent. And the vast majority of traditional sports have called time out, giving esports an opportunity to fill the void and force itself into the mainstream. But the biggest impact could come not from people watching more esports during the lockdown, but rather from people playing more games competitively.

On a global level, it can be argued that esports is already mainstream. In 2018 the World Championship finals for popular game League of Legends drew in an estimated total audience of 100 million, more than that year’s Super Bowl. But esports are still relatively niche in the West, with market research company GlobalWebIndex estimating that just ten percent of internet users in the US and Europe watch esports.

Now however, esports are being thrust into the limelight, with some traditional sports broadcasters and leagues turning to competitive gaming to help fill out their schedules. US sports broadcaster ESPN for example aired twelve straight hours of esports on Sunday, a mix of live and archive coverage. Meanwhile sports stars from Formula 1 and several European football leagues have gotten involved in hastily organised esports tournaments based around their respective sports. But will this extra coverage actually bring in new fans?

Existing esports fans are certainly tuning in more during the lockdown says Morris Garrard, an analyst from market research company Futuresource Consulting. “Twitch [a video game live streaming platform] is seeing 10 percent week on week growth of viewers, and Youtube gaming is seeing similar 10-15 percent growth in viewership,” he told VAN. Garrard expects that the majority of this will be existing users spending more free time whilst at home watching content.

That’s not to say there won’t be any new fans tuning in. Garrard expects that a small portion of the growth in viewership will be people tuning into esports for the first time. And Jonathan Stringfield, VP and global head of business marketing, measurement and insights at game developer Activision Blizzard Media and Esports, believes the lockdown gives esports a chance to prove itself to new audiences.

“One of the core things that differentiates esports from traditional sport is that it can be played at the highest level completely online,” he said. “While these previously seemed unorthodox compared to traditional sports, right now this is proving to be a real boon. Professional leagues, such as Overwatch League, have been able to continue with minimal disruptions and provide an additional entertainment option for those who are spending more time at home.”

But there could be more significant long term effects. The pandemic could lead more users to try participating in tournaments themselves for the first time, making them more likely to watch esports leagues and tournaments in the future.

Elliot Bond, schools and colleges liaison officer at the British Esports Association, said he expects a rise in participation. “Most of our recent contact from outside organisations over the last few weeks has been schools, colleges and sporting institutions who are looking for ways to keep their community engaged and transition into the online space,” he said. “We are in contact with a number of different sporting clubs (not just in the UK) at the moment in order to try and get them up and running in a digital fashion.”

Activision Blizzard’s Stringfield meanwhile said new users could get involved in esports as they “provide an opportunity for people to maintain a level of social connectivity without putting themselves at risk physically”.

For esports, playing the games themselves is often a prerequisite to watching the professionals play, as the games can be complex and hard to understand.

Michael Heina, Nielsen Sports’ head of esports for Europe and the Middle East, outlined the problem. “Just because people can’t watch regular sports, they’re not going to start watching the most popular esports titles like DOTA 2, since you have to have played most of those games for 1,000+ hours to be able to stay on top of the action.”

If more people start playing video games which double up as popular esports however, they’re more likely to become a dedicated fan of that esport further down the line.

It’s not true to say that esports have been able to go ahead unhindered by the lockdown. While esports tournaments can be played online, they’re often hosted in stadiums, watched by live crowds numbering tens of thousands. So while, as Stringfield says, some esports tournaments have gone ahead as planned, others have been cancelled due to the disruption.

“One of our pride and joy moments each year is taking the grassroots esports aspirers to the Insomnia Gaming festival (supposed to be held over this coming Easter Weekend), and giving them the chance to play live on stage with full production teams and an audience,” said the British Esports Association’s Elliot. “Sadly Insomnia (and all the other major events) have cancelled.”

If new viewers do tune into live esports tournaments for the first time, they won’t be getting the full experience – the crowd can be as much a part of the spectacle as in any other live sport.

Nonetheless, those VAN spoke with agreed the extra exposure would be good for esports’ profile. Nielsen’s Heina said this exposure could also lead to more interest from brands, boosting investment in the area.

“For many brands, virtual sports and esports are gaining popularity and awareness as possible sponsorship assets,” he said, though it could be a while before new money starts flowing. “Since many of them are faced with platforms like Twitch and its possibilities for brand integration for the very first time, it will take some time until we see a new wave of sponsors in esports.”

But while some believe this could be a breakthrough moment, others say it may just accelerate a trend that was already happening.

“Whilst the COVID-19 outbreak has highlighted the validity of esports to the wider public, it remains a peripheral community very much, for the moment,” said Futuresource’s Garrard. “This is all set to change soon though and with official recognition coming from official governing bodies such as Asian governments and the Olympics committee we can expect more and more people to become interested in the industry.”