Mobile-first streaming service Quibi went live in the USA and Canada today, and also (rather unexpectedly) in other markets, including the UK. The new service, founded by Dreamworks Animation co-founder Jeffrey Katzenberg and headed up by ex-eBay and HP CEO Meg Whitman, has split analysts’ opinions since it was first announced in 2018. Some believe that Katzenberg’s ability to draw in high profile directors and actors (with Stephen Spielberg, Guillermo del Torro and Sam Raimi among those signed up to make shows for Quibi) will give Quibi a library of must-see content. The sceptics expect it to go the suffer the same fate of Verizon’s mobile-first go90 service, which was unable to carve out space for itself in the crowded streaming market. 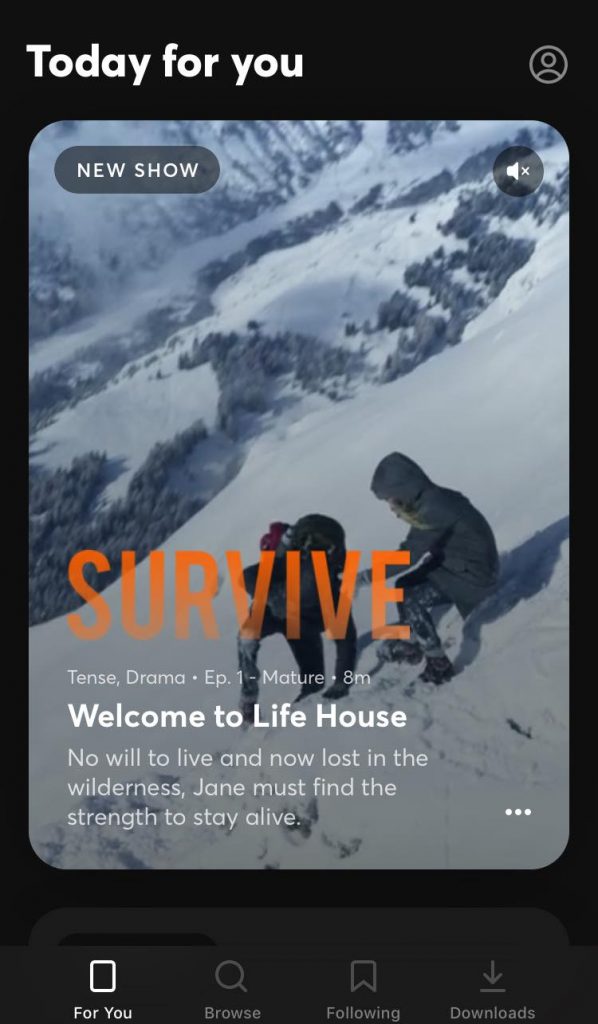 On the day of its launch, does Quibi look set for success? Here are VAN’s first impressions of Quibi’s UK edition:

Quibi’s release in North America has been heavily hyped up and marketed, helped by the $1.75 billion in funding it’s attracted. But outside of our industry it has been almost completely unheralded in international markets. The company had said the app would also be released in internationally on April 6th without giving many specifics, and it has not be marketed at all outside of North America.

This North American focus is clear throughout, from the App Store to the content itself. While Quibi splashed out on a Super Bowl campaign for the USA, in the UK the company hasn’t even paid to promote itself within the App Store. At the time of writing, when you search for ‘Quibi’ in the Apple App Store, Quibi itself is the 10th result. 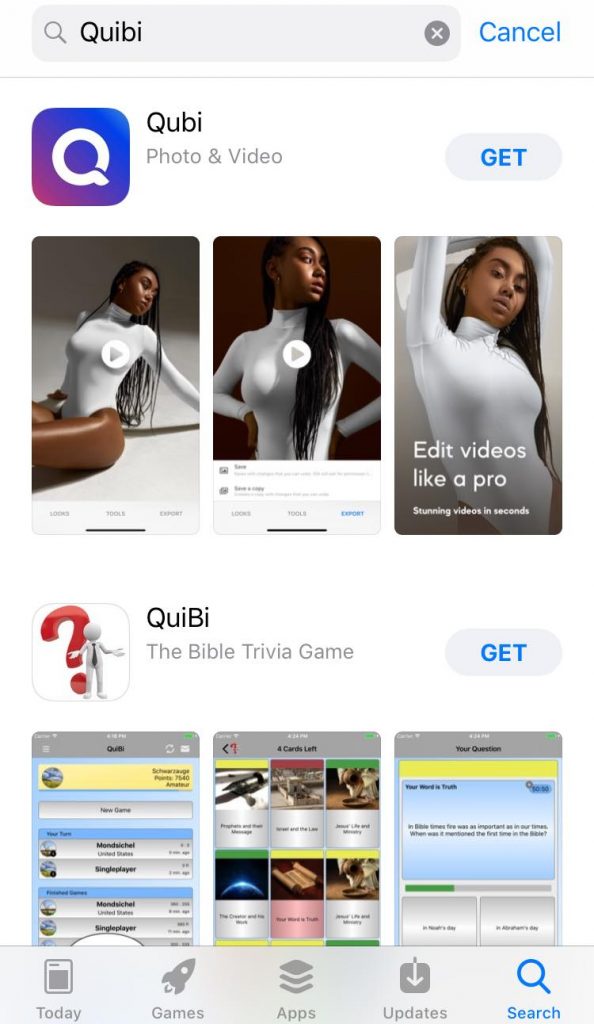 The subscription plans don’t seem to have been optimised for international markets either. Currently in the UK, only the ad-free version is available (in North America, users can also sign up to a cheaper, ad-supported version). The UK ad-free version costs £7.99 per month (no ads are being shown on the free version), which seems expensive given it costs $7.99 per month in the US and doesn’t feature any European content.

And the content seems to be geared towards American audiences too. Many of the bigger stars featured on Quibi’s shows, while known internationally, will be more familiar to Americans (such as Chrissy Teigen, Lebron James, and Chance the Rapper). Even the release time for new episodes are only given for US time zones.

This raises questions about Quibi’s plans for international expansion. Will the service get an official ‘launch’ at a later date for the UK and other markets, with more content tailored for these markets? Or is Quibi waiting to see how it fares in the US market, before deciding how aggressively it wants to the service overseas?

Quibi has launched with a number of big-budget dramas and thrillers, featuring some well known actors. Chistoph Waltz, Liam Hemsworth, and Sophie Turner are among the stars of its most prominently surfaced shows. The production value and star power of this content means it could happily sit on any on the other competing streaming services.

But in some ways, Quibi feels more like YouTube than Netflix. Most obviously, the content is short – Quibi caps its shows at ten minutes per episode, but most fall short of this, with the majority of content sitting between 5-8 minutes in length. And some of this content is broken up into even smaller chunks. ‘Last Night’s Late Night’, a compilation of clips from the previous day’s late night talk shows, lets users skip through the different segments. This show in particular feels like it could have been pulled from YouTube, where talk shows commonly republish snippets of their interviews. 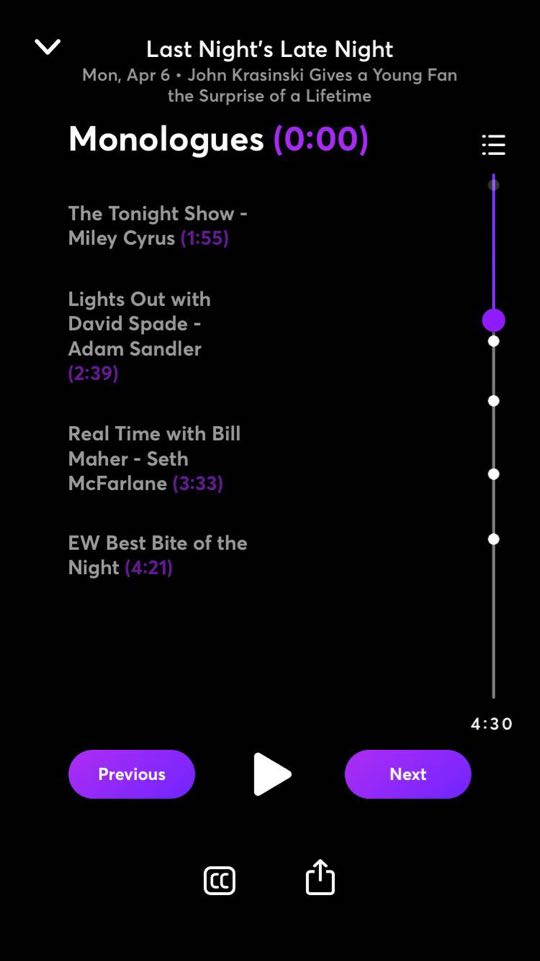 The way Quibi surfaces its content also gives it a more YouTube-like feel, honing in on what’s new and popular, rather than trying to guide users towards particular types on content. Quibi’s home page features 18 individual shows, rather than suggesting genres or categories of content. Content categories are instead found on the ‘browse’ page, and focus more on what’s new and trending. The primary categories presented are ‘New Releases’, ‘Daily Essentials News’, ‘Daily Essentials Lifestyle’, and ‘Trending’. 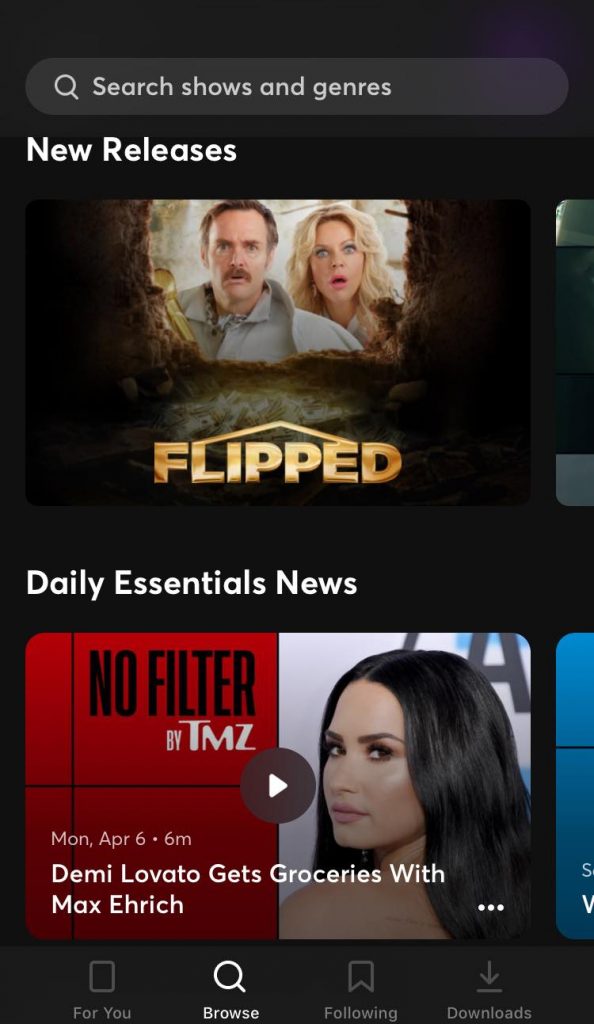 Playing to its Differences

Aside from its short content and mobile focus, Quibi is clearly trying to set itself apart from competitors by highlighting a few of its more unusual features.

For example (unlike many of its rivals), Quibi is releasing new content on a daily basis (which the company emphasises in the App Store, where the app is called ‘Quibi: New Episodes Daily’). Most shows have launched with three episodes to start, with more episodes to be released within the coming weeks. To help with this, Quibi is also staggering its releases, with new shows set to debut over the next few months. 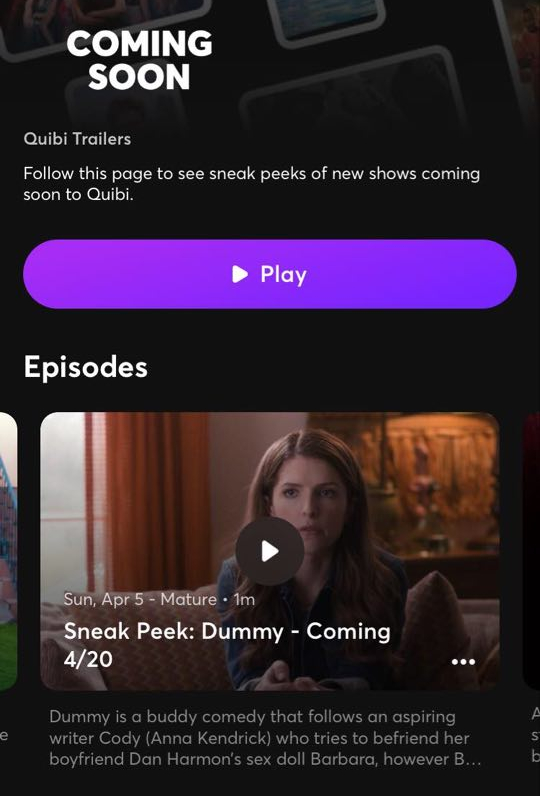 This could help ensure users keep coming back to the app – and might be a smart tactical strategy when it comes to reducing to churn, with users signing up, binging the shows they want to watch in a few days, and then cancelling. But equally it could mean that Quibi ends up being hit hard by the disruption to TV production that coronavirus is causing – keeping up daily releases could be difficult with so much production shut down for months.

Another of Quibi’s heavily marketed features is ‘Turnstyle’, whereby all content is optimised to be displayed in both vertical and horizontal formats, meaning users can switch between the two by tilting their phone. The feature runs very smoothly, but it’s questionable how much it really adds. On many of the shows released so far, you see more via the horizontal view than you do in vertical, meaning you’d likely want to watch them horizontally the whole time anyway. There may be some interesting opportunities for the feature to be used creatively, but so far these don’t seem to have been utilised.

Will COVID-19 hold back Quibi?

At launch, Quibi does seem to be offering something genuinely different in the crowded streaming market, but whether this will be enough to win over users remains to be seen. The service has debuted with an unusually long 90 day free trial, giving itself a big window to prove its worth to audiences.

But the service could find itself hindered by the coronavirus pandemic. Quibi seems built for moments in audience’s days where they have a spare ten or twenty minutes – during a commute, or a lunch break at work. But with so many stuck inside and not working at the moment, Quibi might find itself to be a hammer without a nail – for the time being at least.