In this week’s Week in Review: WPP sells a 60 percent of Kantar to Bain Capital, Google and Amazon call off their OTT hostility, and France passes its new three percent tax on tech giants. To receive an update on the industry’s top stories every Friday, sign up to the weekly Video Round-Up.

WPP Sells Off Majority Stake in Kantar to Bain
WPP confirmed this morning that is selling a majority stake in its data analytics arm Kantar to Bain Capital. Bain will take a 60 percent stake in the unit, which values Kantar at £3.2 billion. The sale comes at a time of restructuring for the holding group as it looks to streamline its business while also cutting its debt. CEO Mark Read said the sale leaves the company with “a much stronger balance sheet”, with a return of approximately eight percent of its current market value to shareholders planned.

While WPP isn’t completely divesting Kantar, the sale is notable partly in how rival agency groups, like Publicis Group and ex-WPP boss Martin Sorrell’s S4 Capital, are investing more heavily in data. But Read said that “data is critical to WPP’s clients and critical to WPP, but there’s a growing number of sources of data”, and that his company would still be able to effectively use data to drive its marketing programmes after the Kantar deal.

Amazon and Google Call Ceasefire in OTT Wars
Amazon and Google have called an end to the feud which has developed between the two’s OTT businesses this week.The two announced that Amazon Prime Video is being made available on Chromecast and Android TV devices, while Google’s YouTube app returning to some Amazon Fire TV devices.

Google pulled the YouTube app from Amazon Fire TV devices well over a year ago as part of a long running standoff between the two companies. Google complained that Amazon was refusing to carry certain Google products like Chromecast and Google Home on its ecommerce site, and was refusing to make Prime Video available to Google Cast users. Amazon meanwhile hit back that Google was “selectively blocking customer access to an open website”.

France Passes Tech Giant Tax Despite US Complaints
France this week approved a new digital services tax aimed at multinational tech giants like Google, Facebook and Apple, despite protests from the US administration. The three percent tax will be place on sales generated in France by any digital companies with global revenue of over €750 million where at least €25 million is generated in France. The tax was proposed after attempts to create an EU-wide tech tax failed to come to fruition, and while the US giants are the most obvious targets, it will also hit Chinese, German, Spanish and British firms, as well as French ad tech company Criteo.

The Trump administration spoke out against the tax earlier in the week, opening an investigation into whether it is discriminatory or unreasonable, which could result in punitive tariffs levied against France in response.

ID5 Releases its Universal ID Solution Via Prebid
ID5 this week announced that its Universal ID is now available in Prebid.js to publishers and ad tech platforms globally. Publishers can retrieve the ID5 ID, store it on a 1st party cookie and pass it to their demand partners via a simple on-page configuration, according to ID5. Bid adapters in Prebid can listen to the ID5 ID and send it to their RTB demand partners on all impressions. ID5 says its Universal ID allows publishers to increase their monetisation capabilities by enabling buyers to identify 100 percent of users even in environments where 3rd party cookies are blocked.

In an effort to combat fraud, AdLedger says it is executing proof-of-concept projects with members like Omnicom, MadHive and Salon Media, that leverage blockchain and cryptography to establish airtight verification and validation of KPIs.

Dataxu and Mediamond Enter International Partnership
TV buying platform dataxu has announced a new partnership with Mediamond, the advertising sales house of Mediaset, Italy’s biggest broadcaster, which will see Mediamond inventory made available through dataxu. “This partnership with Mediamond is a statement on just how much the programmatic industry is evolving hand-in-hand with major broadcasters,” said dataxu VP of international Mike Shaw. “It is incredible for dataxu to be selected as a trusted partner by the commercial arm of one of the biggest broadcasters in the world, and we certainly look forward to this partnership empowering our clients and the wider industry more broadly.”

JW Player Partners with Ovation TV
JW Player and Ovation TV this week announced a partnership which will see Ovation TV use JW Player’s Video Content Management System (VCMS), as well as its player to deliver content across desktop, mobile, and connected-TV devices. Ovation TV will also use JW Player’s VCMS for its travel-focused AVOD service JOURNY. “We’re delighted to partner with JW Player to bring our amazing fans our series, movies, and docs more seamlessly and intuitively than ever before,” said William Marks, Ovation TV’s SVP of business development and digital.

WarnerMedia Unveils HBO Max
AT&T’s WarnerMedia this week gave fresh details into its upcoming streaming service, which will be called HBO Max and will launch in Spring next year. Despite the HBO branding, the service will house content from across WarnerMedia’s media properties including HBO, Warner Bros, New Line, DC Entertainment, CNN, Cartoon Network and Adult Swim.

As one of a number of yet-to-debut new streaming services including Disney+, Apple TV+, and Comcast’s unnamed offering, HBO Max will be entering a highly competitive market. One big selling point revealed this week is that Max will hold exclusive streaming rights for popular sitcom Friends (currently house on Netflix), as well as The Fresh Prince of Bel Air and Pretty Little Liars.

TV Sales Execs Pinpoint Targeting and Personalisation as Priorities
An egta survey of its TV and radio sales houses members found that CEOs and executives see opportunities ahead in targetability and personalisation. Approximately 88 percent of respondents perceive targetability – enabling advertisers to pinpoint their target markets – and personalisation – creating relevant and unique experiences that hold attention for longer – as a priority for their company in the coming years. Meanwhile 77 percent of TV members said they are positive about the future of the advertising market.

Ad-Supported Netflix Would Prove Popular says TDG
Around a third of Netflix subscribers would consider switching to a cheaper, ad-supported subscription tier if one were made available according to a report from The Diffusion Group. While Netflix has so far steered well clear of ads (content promotion aside), the business has begun raising its prices in various markets as it seeks to match its revenues to its high cash spending – introducing ads would be one alternative. 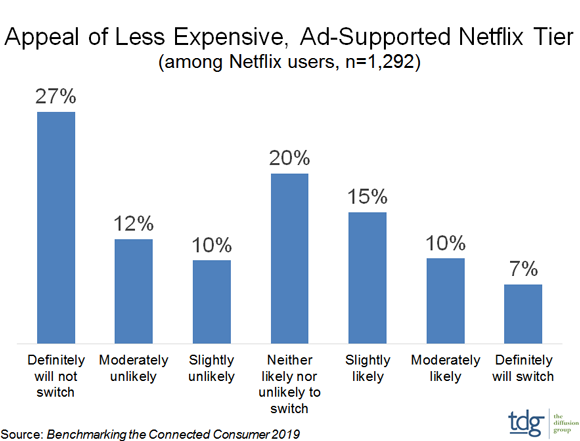 RTL Unifies its Multi-Platform Networks into One European Super Group
European media giant RTL Group on Thursday announced it is combining its European multi-platform networks (MPNs) to create what it describes as “Europe’s leading digital studio”. The move will initially bring together RTL’s German MPN Divimove with its Nordic business United Screens under the Divimove brand, and the group plans to integrate its Dutch business RTL MCN as well in the future. Read the full story on VAN.

Facebook Debuts New Video Monetisation Tools
Facebook has announced a series of new monetisation tools for video creators on its platform, as it attempts more creators away from its rivals in the user-generated content space. These include: 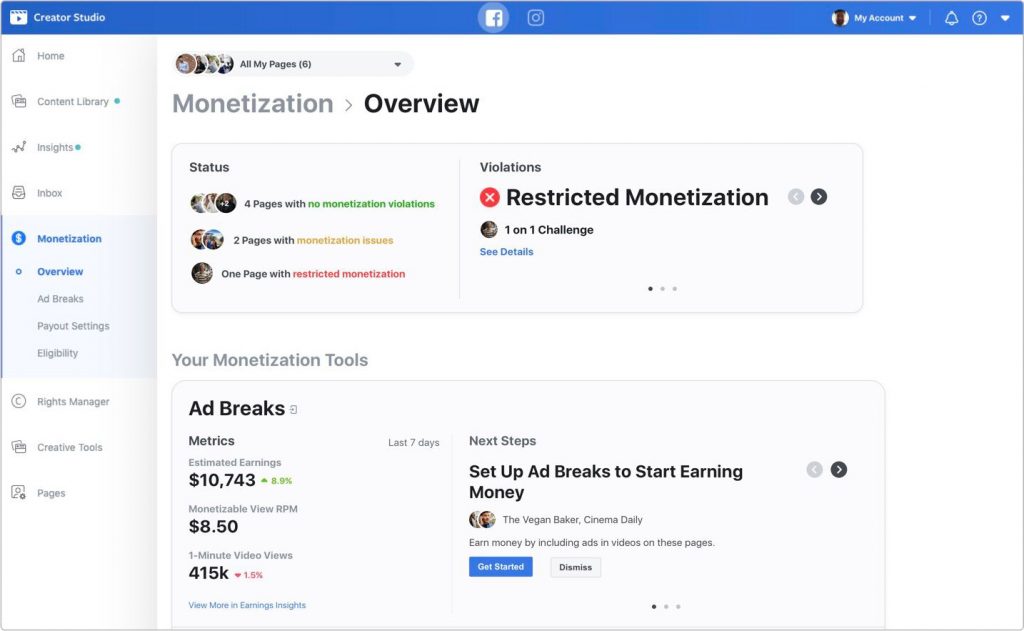 Snapchat Launches ‘Creator Shows’
Snapchat this week launched a new ad-funded show format, Creator Shows, which will enable celebrities and influencers to create short form content in the same style as Snapchat’s own original series. Serena Williams, Arnold Schwarzenegger, Kevin Hart are among those who are signed up for Creator Shows, which began streaming on Wednesday. Snap will share ad revenue with creators, though the terms of these deals haven’t been revealed.

FTC Chair Considers Disabling YouTube Ads for Child Data Protection
The chairman of the US Federal Trade Commission (FTC) Joseph Simons is considering asking YouTube to disable ads on certain channels in response to child data protection concerns. The FTC is investigating the platform over possible violations of the Children’s Online Privacy Protection Act, and Simons reportedly suggested the measure as an alternative to YouTube moving all children’s content to a separate app while on a call with children’s privacy advocacy groups. However the groups wrote in a letter released on Monday that disabling ads in this way might still not prevent data collection, according to Bloomberg.

However, the growth rate is falling rapidly as the internet ad market matures. Internet ad spend grew 17 percent in 2018, but activity in the first half of 2019 leads Zenith to expect only 12 percent growth for the year as a whole. By 2021 Zenith expects internet ad spend growth to have fallen to 9 percent year on year.

BA and Marriott Hit by GDPR Fines
British Airways and hotel chain Marriott were both hit by fines relating to the General Data Protection Regulation (GDPR) by the UK’s data regulator the ICO this week. BA has been handed a £183 million fine, the largest levied under GDPR so far, after personal data of 500,000 customers was stolen through its website and mobile app, which the ICO said was enabled by “poor security arrangements” by BA. Marriott meanwhile is being fined almost £100 million after hackers stole personal information about 339 million guests – again the ICO said more should have been done to ensure IT systems were secure.

Publicis Begins US Reorganisation
Publicis Groupe has begun a new phase of restructuring in the US, splitting its Publicis Communications U.S agencies into three zones: east, west and centre, according to AdAge. The change will affect the likes of Saatchi & Saatchi, Leo Burnett and BBH, with each zone having its own CEO to oversee operations. The holding group has also set up a new executive committee to help integrate its newly acquired data business Epsilon into the daily operations of Publicis’ other arms.

IPA Proposes Value-Based Pricing for Agencies
The Institute of Practitioners in Advertising (IPA) this week released a new white paper in which it proposed that agencies shift to a value-based model of pricing as an alternative to the traditional cost plus billing model. “The traditional cost plus billing model is becoming more and more inadequate as a way to account for the increasingly complex and diverse services that agencies offer and the true value of what they deliver to clients,” said Marc Nohr, chairman of the IPA Commercial Leadership Group. “The Price of Success, which defines the challenges, competitors, complexity and commercial reality facing businesses and gives agencies a wide range of tools to better reflect the value they generate for clients.”

Rubicon Project Appoints Sarah Harden to Board of Directors
Rubicon Project has announced the appointment of Sarah Harden, CEO of Hello Sunshine, to its Board of Directors. Sarah is currently the Chief Executive Officer of Reese Witherspoon’s media company Hello Sunshine, following five years of executive level positions at Otter Media/The Chernin Group, including president and EVP.

Leading Experts Say It’s Too Early to Expect Much from the US GAFA Antitrust Investigations, read more on VAN

Why It’s Time for Rewarded Video to Thrive Outside of Gaming Apps, read more on VAN