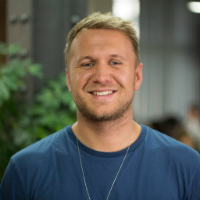 With Facebook’s announcement last year that it would begin deprioritising publishers in its news feed many expected that the ‘social publishers’ would be hardest hit – those which had started life as Facebook pages and evolved into media brands.

But we’ve seen some inventive responses from the social publishers, with Jungle Creations being a stand out example. The social media brand uses its reach and understanding of social to create content for brands, but has also begun launching its own products – including a cookbook, several restaurants, and its ‘Lovimals’ range of accessories which customers can customise with pictures of their pets.

With the company recently announcing the expansion of its Twisted restaurant chain, and set to launch a range of cookware soon, VAN caught up with founder and CEO Jamie Bolding to hear how social data and analytics are powering these new businesses.

How did Jungle Creations start, and how has it evolved since you founded it?

It was almost five years ago now that I started Jungle. I started a couple of businesses at university which were websites for students, and my challenge was always to drive traffic to those websites. I discovered quite early that using social media was one of the best ways, if not the best way, to do that – through building communities on Facebook and Twitter.

So I built a few community pages, which were basically just funny pages aimed at students, which would then send them to my sites. When I left university I left those businesses behind but used the same concept and logic when I started my social media brand, which was first called Viral Thread and is now called VT.

Again, I was using my Facebook pages to build the brand up, and using user-generated content to build a community with fun, entertaining and shareable content. And VT quickly became one of the biggest Facebook pages in the world, we were getting hundreds of millions of views every single month.

The business model was very simple at the start – build the audience on VT, and use that to drive traffic to the website. But then over time we decided to build more brands focussed on different verticals, things like cooking and crafts. The focus was still on video and social, but each page had a slightly different approach with how we built that community.

So that’s how we built Jungle Creations, and now we have six customer-facing media brands. Over the years it’s changed from just using the pages to drive traffic to our sites – we’re now monetising out content by running ads around it but also by integrating brands into our content, which we do with all our media brands.

The way we see our strategy now is that we’re social experts – we know how people act on social, what they consume on social and what their habits are, which we know through our media brands. And now we have three pillars – our media brands, our marketing business, which is our creative agency, and now also our commerce business, were we use our insights about our audience to create new products.

How important is it for your business nowadays to pull audiences from your social channels onto your own websites?

It’s not as important now at all. Insights wise it’s always a bit better to have audiences on our sites. But the way the world is moving is you either reach people through being on a social platform, or you create a social platform yourself – that’s the way we see it. So we committed to that – we created our websites, but over time websites will gradually disappear, I don’t believe they’ll be a thing in 20-30 years time, people will be consuming all their content on social.

So we went all in on that, but spread ourselves across platforms, on Facebook, Snapchat, Instagram and YouTube. We’re trying to get eyeballs on our media brands on social, and that’s where we’re going to create the best work for our clients. If we integrate brands into our content on social where it’s getting tens of millions of views, that’s going to produce the best results, not just on a website where we won’t get as many views. So we committed to that a few years ago, and look to keep doing that moving forward.

Jungle Creations has expanded into commerce, selling personalised accessories, a recipe book, kitchenware, as well as opening up the restaurant. Was it always part of the plan to branch out into commerce?

We spotted the opportunity along the way really. I’ve always been frustrated that brands aren’t giving us more money and are still doing archaic things that aren’t working, there’s a lot of money that’s wasted in marketing budgets. But I think a lot of people for a while saw social as a bit of a risk, because it’s new and it’s different, and they think the more traditional means of advertising are proven.

Then over time that started making loads of money as well – it’s a really good revenue driver for us, and it’s really good to gather those insights. We can then be fully transparent with our clients and show them what we’re doing with our commerce products to really drive performance, and we now run performance campaigns for our clients as well.

We’ve had some people say it’s just a sidetrack from what we do, but it’s not, because it’s about building communities and driving performance, and that’s what we do as a business.

How does your social data and analytics feed into your commerce businesses?

It’s one thing for a video to do well and get a lot of views, but it’s another thing for people to click on a link and actually buy something off the back of that video. Adverts are really good at driving performance, but they’re bad at getting views and bad at getting engagement. Engage-worthy videos are great at driving views, but they’re not great at driving conversions. But there’s a middle ground that we try and find.

It’s a lot of trial and error – we’re big on testing and big on experimenting. Ultimately, you’ve always got to do the testing process with every client you work with – social gives you the opportunity to do it, so why wouldn’t you do it? That’s very different from what other companies might do – they’ll create a piece of content, but won’t test twenty, or fifty, or a hundred different variations.

And we take out key insights about not only what performs well, but what also drives conversions.

Can this eCommerce model be replicated by other companies?

I think it’s replicable – which probably isn’t the right answer! But I don’t think others are doing it, or they’re not doing it in the right way, so we’ve got a big head start.

Brands need to start behaving like publishers – they’re getting better at it, but they’re still not doing it properly because they’re stuck in their old ways. Businesses changing the way they operate when there are hundreds of systems in place is pretty much impossible.

So we’re building our system around innovation, around being a publisher, around data, around insights. And by the time other companies do adapt and do change, it’ll be too late – we’ll be too far gone!