The WIR: ITV and BBC Clash Over BritBox, Mediaset Buys a 9.6 Percent Stake in ProSiebenSat.1 Media, and a Study Claims Publishers Are Barely Benefiting from Targeted Ads

The WIR: ITV and BBC Clash Over BritBox, Mediaset Buys a 9.6 Percent Stake in ProSiebenSat.1 Media, and a Study Claims Publishers Are Barely Benefiting from Targeted Ads

In this week’s Week in Review: Tensions rise over BritBox, Mediaset buys a stake in ProSiebenSat.1 Media, and a study claims that publishers aren’t seeing much extra revenue from selling targeted ads. To receive an update on the industry’s top stories every Friday, sign up to the weekly Video Round-Up.

ITV and BBC Clash Over BritBox
Reports emerged this week that ITV and the BBC are bumping heads over their joint streaming venture BritBox. BritBox is due to be launched in the UK as an ad-free subscription funded rival to Netflix, but negotiations have become tense according to the Financial Times, due to ITV seemingly being more committed to the project than the BBC. ITV has pledged to invest £65 million in BritBox to the end of 2020, but the BBC is more focussed on its own iPlayer on-demand platform, according to the report. The FT cites one source close to the negotiations as saying that ITV chief executive Carolyn McCall warned BBC director-general Tony Hall that if he didn’t fully back the BritBox project, ITV would oppose the BBC’s efforts to extend the domestic availability of content on iPlayer after its first broadcast from 30 days to 12 months. The BBC needs approval from media regulator Ofcom for its proposal, and ITV’s opposition could put the brakes on those plans.

Mediaset Buys 9.6 Percent Stake in ProSiebenSat.1 Media
Mediaset this week announced it has bought a 9.6 percent stake in German broadcaster ProSiebenSat.1 Media SE, a holding worth around €340 million. The move follows speculation that a merger between the two might be on the cards, a rumour which ProSieben had refuted several times. “The rapid process of globalisation that is determining the international scenario is such that European media companies like us need to join forces if we are to continue to compete, or even just resist, in terms of our European cultural identity, eventual attacks by the global giants,” Mediaset CEO Pier Silvio Berlusconi said of the deal. “It is in this spirit of collaboration and shared vision that Mediaset, the leader in Italy and Spain, has decided to invest in ProSiebenSat.1. An investment that, we are sure, will create tangible value for both groups.”

Study Finds Benefits of Behavioural Ad Targeting Barely Reach Publishers
Digital ad targeting only brings marginal benefits for publishers, with publishers on average only getting about four percent more revenue for ad impressions that have cookies enabled that those which don’t, according to a study from four US universities. This stands in contrast to the massive premiums advertisers are willing to pay for targeted ads, with advertisers willing to pay 2.68 times more for behaviourally targeted ads, according to a separate study cited by the Wall Street Journal. The findings could have a significant influence on the ongoing debate around digital privacy, Ashkan Soltani, one of the authors of California’s Consumer Privacy Act, told the Journal. “All of these externalities with regard to the ad economy—the harm to privacy, the expansion of government surveillance, the ability to microtarget and drive divisive content—were often justified to industry because of this ‘huge’ value to publishers,” he said.

LinkedIn Buys Drawbridge
LinkedIn this week announced it has bought identity specialist Drawbridge for an undisclosed fee. “We believe Drawbridge’s team and technology will allow us to accelerate the capabilities of our Marketing Solutions platform, helping our customers better reach and understand their professional audiences and measure the ROI of their campaigns across mobile and desktop,” the company said in a blog post.

EE Launches 5G in the UK
British mobile network operator EE this week launched the UK’s first 5G mobile network, making the service available to customers with 5G enabled handsets in parts of Belfast, Birmingham, Cardiff, Edinburgh, London and Manchester. However the rollout got off to a difficult start – a live BBC broadcast which used 5G for a remote interview about 5G broke up due to a poor connection.

Yospace and Seven Extend Partnership for SSAI into Live OTT
Yospace this week announced the extension of its partnership with Australian TV network Seven, enabling SSAI into live OTT channels. “We’ve worked with Seven to pioneer new approaches to monetising its premium live content,” said Tim Sewell, CEO of Yospace. “Broadcasters, advertisers, and audiences are demanding more from OTT in terms of viewer experience, addressability and scale – and the extension of our partnership is testimony to our ability to deliver that.”

Canal+ Buys M7 Group for Over €1 Billion
French pay TV company Canal+ Group this week bought fellow European operator M7 Group in a deal worth just over €1 billion, the largest deal Canal has done in around twenty years.  M7 will give Canal access to new markets, offering TV services in Belgium, the Netherlands, Austria, Czech Republic, Slovakia, Hungary and Romania. “The operation will enable Canal+ to reach almost 20m subscribers globally. Our global base of subscribers will thus have almost doubled in five years, with a clear acceleration since 2015,” said Canal+ CEO Maxime Saada. “This major acquisition will allow us to reinforce our distribution capability and expand the reach of content from catalogue and our numerous production activities in Europe.”

Seventy Percent of Hulu Customers Use Ad-Supported Plans
Around 70 percent of Hulu’s subscribers are signed up to the reduced-price, ad supported plan, according to SVP of ad sales Peter Naylor. Speaking at VideoNuze’s Video Advertising Summit, Naylor said that Hulu has found the majority of customers are willing to accept ads to a degree, so long as they’re not overbearing, according to Digital TV Europe.

US Time Spent on Facebook is Falling says eMarketer
The average amount of time US adults spend on Facebook is falling, according to a report from eMarketer. The report finds that Facebook’s moves to decrease passive consumption of content on its platform has seen average daily time spent on Facebook fall by three minutes in 2018. User engagement with Snapchat meanwhile has plateaued at 26 minutes per day, according to eMarketer’s data. The good news for Facebook is that engagement on Instagram (which Facebook owns) is rising, reaching 26 minutes per day in 2018 compared to 25 minutes in 2017. 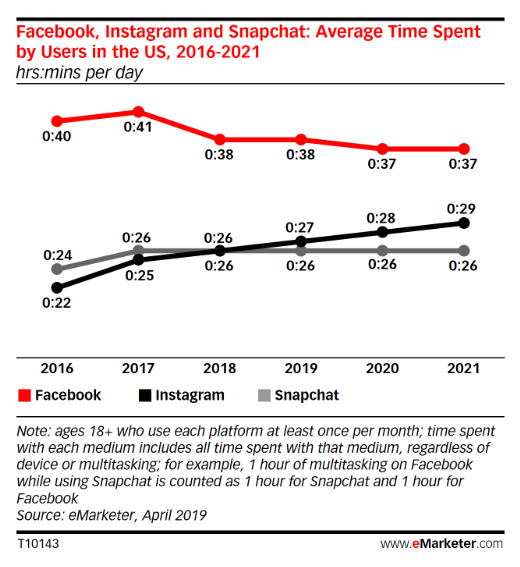 T-Series Reaches 100 Million YouTube Subscribers
Indian music label T-Series’s YouTube channel this week became the first (outside of the default channels created by YouTube) to reach 100 million subscribers. The achievement highlights the reach available on YouTube, especially to established media brands, but has also sparked concerns from some YouTube creators about the platform giving preference to large media companies. T-Series overtook YouTuber PewDiePie earlier this year as the most subscribed-to YouTube account, which some within the YouTube community said was emblematic of the platform becoming less geared towards individual creators, and more towards brands and big media companies.

S4 Capital’s Reports Continued Strong Growth
Sir Martin Sorrell reported that his holding group S4 Capital is continuing to grow at a strong pace, claiming that reportable revenues in the first four months of 2019 were up 45 percent year-on-year, and like-for-like revenues were up 41 percent. Speaking at the company’s annual general meeting, Sorrell also said that the company’s staff count has now reached 1300, meaning it’s doubled over the past year according to The Drum.

Sid Lee Chooses Andy Bateman as US CEO
Sid Lee has hired Andy Bateman as its new US CEO, the agency announced this week. Bateman will lead an expanded Sid Lee structure which includes Digital Kitchen, RedPeak, Infrared and Hornall Anderson, according to Adweek.

The Next Two Years Will Define Where the Video Ad Market Goes says AppNexus’ Gilbert, read more on VAN

How Formula 1 is Seizing the OTT Opportunity, read more on VAN