Will Voice be a Game Changer for TV and OTT?

Will Voice be a Game Changer for TV and OTT? 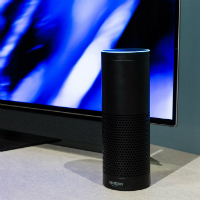 It’s still relatively early days for voice control’s integration with smart TVs and their peripheral devices – but this is rapidly changing. Several device makers have invested significantly in voice – Sky for example has made voice control a key feature of its Sky Q set-top box, while Samsung has pledged to include its voice-controlled assistant Bixby on every device it makes by 2020. Those who don’t own their own voice tech are often integrating Google or Amazon voice functionality instead. For example, Hyundai, LG, Philips and Sony have all integrated Google Assistant, while Hisense and Toshiba have both integrated Amazon’s Alexa.

And consumers are increasingly using voice control. An IHS Markit survey earlier this year found that 22 percent of internet users in the UK, US, Australia and India use voice commands to operate video devices like TV sets and set-top boxes. Predictably, adoption is highest among younger generations, with 33 percent of 25-34 year olds using voice commands.

Voice in many ways has a natural home on TV and OTT. For one, it’s fairly widely acknowledged that remote controls are a clunky way to interact with TVs. While they served their purpose well enough when consumers just needed to flick through channels, they’re awkward to use when interacting with connected TV apps, entering log-in information and for searching for content on OTT services.

It’s also one of the contexts where it’s most convenient to use voice. “If you’re using your phone on the train for example, you might not want to use your voice because everyone can hear you,” said Dom Joseph, CEO of Captify, a company that specialises in using search data for advertising. “TV is probably one of the only devices where most of the time voice is a great use case for consumers – you don’t have to fiddle about with the remote, and you don’t have to move from the sofa.”

Whilst voice control technology has been around for a relatively long time, Joseph said that it has gotten much stronger recently, becoming more able to handle complex queries with multiple questions contained within one sentence.

The Race to Own Voice Search

Nigel Walley, managing director at Decipher, a London-based TV consultancy business, breaks voice’s use cases down into three broad categories – transport functionality, search and concierge service. Out of these three, concierge services (things like setting alarms and scheduling calendar appointments) have the least relevance for TV, since these would usually be better served by other devices.

Transport functionalities, simple actions like changing channels, pausing and rewinding, are perhaps the most basic use cases for voice – they’re actions that can fairly easily be accomplished by a TV remote, but they don’t require particularly sophisticated tech to execute.

While these abilities don’t add a huge amount of value for consumers, they’re still in demand. “Consumers are saying that they really want to be able to do just simple stuff, they want to be able to shout at the TV to turn it on, and tell it to switch to ITV, things like that,” said Walley.

But it’s voice search and discovery which people seem to agree has the most potential.

At its most basic, voice search gives users a more efficient way to look for content they’d otherwise have used an on-screen keyboard for – which will be particularly useful for OTT services with deep libraries of content. “Fairly soon, you’ll see the more popular OTT apps like Netflix building voice more deeply into the user interface, helping users with both simpler navigation and better content discoverability,” said Brian Edelman, founder and CEO of RAIN, an agency that specialises in voice. “For Netflix and its competitors in the streaming media space, a better interface that’s more efficient for the user is always the goal.”

It also makes short-form content much more accessible on TV sets. A consumer might be willing to slowly type out a TV show’s name via their remote because they only have to do it once. But browsing through an app like YouTube, where users might switch videos every few minutes, is much less appealing. With voice search removing this friction, short-form content might become much more widely consumed via connected TVs.

But it also opens new ways of searching for content on linear TV. Nigel Walley said we might reach a stage where users can just ask their TV to “show me Eastenders”, which will then take them straight to the right channel.

This has some negative implications for broadcasters. “There’s a lot of nervousness and panic about whether it’s going to change the way we understand channel brands,” said Walley. “If people no longer have to go through a page menu where they’re seeing a channel brand, and seeing a programme within a channel brand, does that change our understanding of TV channels and their role?”

OTT services might share these concerns – if for example a user can just tell their TV to “Play Stranger Things” without having to navigate through the Netflix app, this makes Netflix’s brand less visible, and gives Netflix less control over the user experience.

Voice search will likely also begin to incorporate elements of recommendation and discovery as it becomes more advanced.

“The nirvana for me would be I walk into the living room, turn the TV on, and say ‘I want to watch something like a modern day Golden Eye’,” said Charlie Cadbury, CEO of Say It Now, a company that specialises in making voice skills. “Then my TV might ask ‘have you watched the Bourne films?’, and it becomes an intelligent conversation.”

Again, this has wider implications. If voice plays a role in content recommendation, then whoever owns voice search on TV sets becomes an effective gatekeeper to TV content.

This is at least part of the motivation for both Google and Amazon pushing their voice assistants so heavily. “We’ve seen a huge war emerge between Google and Amazon, obviously both data giants who are trying to get first in line to consumers through devices,” said Joseph. “So they’re making their own devices and installing their own search engines within those devices”.

In the TV world specifically, whoever controls voice search is both able to give preferential treatment to their own content (which both Amazon and Google own plenty of), and to charge other content owners to promote their own shows and films.

This may be why some companies like Sky are choosing to build their own voice assistants, rather than just integrating a third party’s voice AI. “Amazon are a pretty scary competitor at the moment for any TV platform,” said Walley. “So I suppose Sky just don’t want them anywhere near their systems.”

A New Type of Teleshopping?

Voice search on TV could also be used to promote retail brands and products, not just apps and content. Joseph said voice control may make shopping via TV more viable, and the appeal to brands here would be clear – a TV ad could give audiences a voice command prompt which would take them straight to an online store via their TV.

TV ads themselves can also make use of voice. There have been a couple of examples of TV adverts (intentionally or not) setting off standalone devices – last year for example an Amazon Echo owner complained that a Purina ad had included the line “Alexa reorder Purina cat food”, which had triggered his device.

While this obviously isn’t a serious use case, voice controlled assistants can be a convenient way to encourage audiences further down the marketing funnel. One company, Send Me a Sample, creates voice skills for consumers to order free samples of products via their connected home devices, and brands can use TV ads to prompt users to do so.

But solutions like these will only become more effective as voice control becomes a standard integration for TV sets and set-top boxes, and one the industry helps to break down one of the barriers for adoption of voice assistants – teaching consumers how to use them. Say it Now’s Cadbury said that TV ads can play that educational role and are a great way for brands to show audiences how to use their branded voice commands or order products via voice.