In this week’s Week in Review: The MRC proposes new video ad measurement standards, YouTube axes some of its more expensive original shows, and The Trade Desk’s programmatic trading platform expands into China. To receive an update on the industry’s top stories every Friday, sign up to the weekly Video Round-Up.

Media Rating Council Proposes New Video Ad Measurement Standards
The Media Rating Council published a new draft cross-media standard for video ads this week, which would impose tighter viewability standards, as well as stricter rules for measuring ratings on linear TV. The draft, which has now been put to the industry for a 60-day feedback period, calls for viewability standards to be raised so that 100 percent of a video ad’s pixels must be in view for at least two seconds, up from the current standard of 50 percent of pixels. This viewability standard would be imposed on digital video, but also linear TV for cross-media reporting, where it would have to be shown that each individual ad was in view.

The draft also proposes the establishment of a ‘duration weighting’ standard for video ads where the total amount of time an ad is viewed for is reported. The standards, which would come into force in 2021, would force the likes of Nielsen to provide more precise ratings data than they currently do – if they wish to remain MRC accredited.

YouTube Cancels Pricey Original Shows
YouTube has cancelled plans for a number of premium drama and comedy shows which were due to be released on its paid subscription service YouTube Premium, Bloomberg reported this week. The video platform has axed several shows it had already commissioned including sci-fi drama “Origin” and comedy show “Overthinking with Kat & June,” and has also stopped hearing pitches for expensive scripted shows, according to the report.

YouTube isn’t planning to stop commissioning original content entirely. But YouTube Premium has struggled to compete with the likes of Netflix and Amazon Prime Video according to Bloomberg, with the company planning to eventually make all its shows free to all users.

The Trade Desk’s Programmatic Trading Platform Expands Into China
The Trade Desk this week launched its programmatic ad buying platform in China, a move which the ad tech company said came in response to global marketers’ focus on China as a key market for growth. TTD says it has partnerships with some of China’s top media companies including Baidu Exchange Services, iQIYI, Tencent Marketing Solutions and Youku, as well as integrations with data, brand safety and anti-fraud companies.

“We believe so much in the opportunity in China and are excited to work with our clients and partners to bring it to life,” said Jeff Green, CEO and founder of The Trade Desk. “We have made a significant investment in the country over the past few years and are confident in our ability to be the trusted programmatic partner to help multinational brands grow in China and around the world.”

Roku Partners with Adobe for OTT Frequency Capping
Adobe announced a new partnership with Roku this week that will enable advertisers using Adobe Ad Cloud, Adobe Audience Manager and Adobe Analytics to target their first-party audience segments on the Roku platform. The two say the partnership will enable advertisers to better scale their campaigns, measure frequency, and better measure success on OTT.

FreeWheel Launches DRIVE in the UK
Comcast-owned FreeWheel this week launched DRIVE for the UK market – a suite of unified advertising solutions which FreeWheel says gives marketers real-time, large-scale reach across premium audiences. Using the solution, FreeWheel says marketers will be able to:

Apple Underwhelms With New Streaming Service ‘Apple TV+’
Apple unveiled its long-rumour ad-free subscription streaming service, ‘Apple TV+’, at its ‘Show Time’ event in Cupertino California on Monday, officially throwing itself into the war for the living room. Apple dedicated a large amount of the event to showcasing its original content for the service, including a reboot of Steven Spielberg’s ‘Amazing Stories’, a talk-show themed drama called ‘The Morning Shows’, and an unnamed sci-fi show starring Jason Momoa and Alfre Woodard.

Apple TV+ doesn’t have any particularly unique angle to it – rather Apple seemingly hopes the new service will sell on the strength of its content line up. Apple trotted out a number of celebrities to announce the new shows, including Steven Spielberg, Oprah Winfrey, Jennifer Aniston, Steve Carell, JJ Abrams (and Big Bird from Sesame Street). Read the full story on VAN.

Sky Begins Running Six Second Ads on Sky Go App
Sky has started running non-skippable six second pre-roll ads on its Sky Go over-the-top (OTT) app, Digiday reported this week. The short format has proven popular on digital platforms, and now agencies are looking to be able to use their six-second creatives in premium broadcaster-owned environments according to the report, leading to Sky experimenting with the format at the start of the year.

LaLiga Launches Spanish Sports Streaming Service
Spain’s top football league LaLiga has launched a new OTT service focussed on Spanish sports, LaLigaSportsTV. The app will give free coverage of a number of live Spanish sports, including basketball, handball, hockey and eSports, and matches from Spain’s second, third and fourth tier football leagues will also be available for a fee. “This service, designed by LaLiga, will boost the visibility and exposure of all Spanish sport, with matches also to be made available internationally via a catch-up service,” LaLiga said in a statement.

Sky and Virgin Media Announce Launch Date for AdSmart Partnership
Sky and Virgin Media announced this week that Sky’s addressable TV advertising technology AdSmart will be available across the Virgin TV footprint in the UK from July 1st this year. The two first announced the partnership back in 2017, and when the integration goes live in July, it will expand AdSmart’s reach to 30 million targetable TV viewers in the UK and Ireland.

The news comes as AdSmart continues to roll out internationally. Sky has been gradually releasing the product into its European markets including Italy and Germany, following its initial UK release in 2014. And will be it will also be expanded to cover fellow Comcast property NBCUniversal in the US over the coming years, as the two align their advanced TV advertising offerings.

Cloud of Uncertainty Hangs Over UGC and News Aggregators as EU Approves New Copyright Directive
The European Parliament earlier this week voted in favour of the EU’s controversial new Copyright Directive by a margin of 348 to 278. The new laws are designed to strengthen digital protections for copyright holders, but could be damaging for content sharing platforms, as well as the creators who use them.

The directive has drawn controversy due to two specific articles. Article 11 forces search engines and news aggregators (like Google News) to pay for links to third party sites, which Google has claimed could see Google News shut down in Europe. But Article 13 has caused the most debate. This article would hold larger tech companies, the likes of Facebook and YouTube, responsible for copyrighted content which is posted on their platforms without a license. Read the full story on VAN.

Apple Debuts News and Magazine Subscription Bundle with News+
Apple announced changes to Apple News at its showcase on Monday, introducing a new subscription service which bundles a number of paid news subscriptions and access to digital copies of paid magazines. The service, Apple News+, will cost $9.99 per month, and includes access to The Wall Street Journal, The LA Times, and magazines including People, Time, The New Yorker, The Atlantic, GQ and Vogue.

It’s not clear whether these publications will be able to run ads in the app, but Apple’s VP of applications Roger Rosner did say that advertisers won’t be able to track users’ reading habits on the app. The new service launches in the US and Canada initially, with roll-outs planned for Australia and Europe later this year.

Reddit Ad Revenues Predicted to Pass $100 Million This Year
Social sharing site Reddit is on course to more than double its ad revenues by 2021 according to eMarketer, when it is expected to reach $261.7 million. Total ad revenues on the platform this year are expected to reach $119 million, up from $77 million last year. “The company has retooled its ad offerings over the past year, which included the launch of new ad formats like autoplay in-stream video, cost-per-click, app install and ‘Top Post Takeover,’ which allows brands to have their ads appear on the site’s front page,” said eMarketer forecasting director Monica Peart. 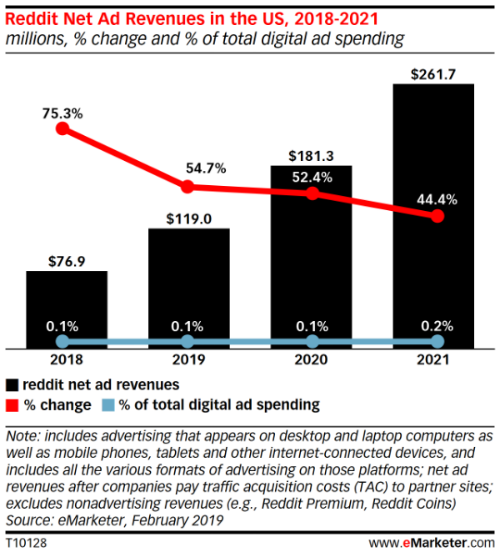 Time Out Group Hit by Facebook Algorithm Changes
UK-based listings company Time Out Group saw it’s audience engagement fall by a third as a result of changes Facebook made to its News Feed algorithm last year. It’s global monthly audience fell to 144 million in 2018, down from 217 million the previous year, which the group said was “primarily the result of a Facebook algorithm change in early 2018 which de-prioritised publishers’ content”. However, digital ad revenues remained strong, growing 23 percent, helping overall revenues for the group to grow by ten percent.

Unilever Clamps Down on Brand Safety and Bot Fraud With ‘Trusted Publishers’ Network
Unilever, one of the world’s largest advertisers, will begin allocating the majority of its digital advertising budget to a network of hand picked publishers as it seeks more effective ways to fight issues like brand safety and ad fraud. The network, called ‘Unilever Trusted Publishers’, will be made up of a mix of global, regional and local digital publishers and platforms, which Unilever will work with closely as it plans its campaigns. Read the full story on VAN.

Agencies Are “Too Passive” Says Dentsu Aegis Network NA CEO
Agencies bosses on stage at the 4A’s Decisions 2020 this week lamented inertia within their companies, AdExchange reported this week. While agencies by and large talk a good game about transformation, Dentsu Aegis Network’s NA CEO Nick Brien said agencies are still too passive, too incremental, and still to bound by legacy mentalities and behaviours. Tim Castree, CEO of GroupM North America, agreed: “The commercial model of our business does feel out of date,” he said. “As we are aligned today, we are disincentivised from creating efficiencies in the core business.”

S4 Capital is ‘Faster, Better, Cheaper’ says Sorrell
Martin Sorrell said his new venture S4 Capital is faster, better and cheaper than the traditional agency model, in an interview with Digiday this week. Discussing his company’s prospects, Sorrell said his data-focussed, digital only approach is chiming well with clients, and that the next challenge for S4 is to reach a larger scale, both organically and via acquisition.

Snap Hires David Roter as VP of Global Agency Partnerships
Snap has taken on David Roter as its new vice president of global agency partnerships, where he will manage its various ad agency relationships. Roter previously spent five years a Twitter, where he was senior director of global video sales and agency development.

Is Netflix Gearing Up for Self-Sufficiency? read more on VAN

Allianz, We Cover Courage, In the Company of Huskies