Did Gillette’s ‘The Best Men Can Be’ Campaign Succeed? Here’s What the Data Said…

Did Gillette’s ‘The Best Men Can Be’ Campaign Succeed? Here’s What the Data Said… 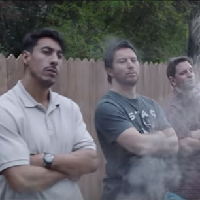 Gillette’s ‘We Believe: The Best Men Can Be’ ad, released at the start of this week, has been seen as a welcome and timely statement on ‘toxic masculinity’ by some, and an unnecessary attack on men by others. If the ad was designed to generate controversy and online conversation, then it was most certainly a success. But at this point it’s difficult to tell if the conversation has pushed forward the gender debate, or if has led created an unnecessarily adversarial atmosphere around the gender issue. And then there’s the razor blades of course – will Gillette sell more as a result of the campaign or will it backfire as some customers make good on their promises to boycott the brand?

At the time of writing, the ad has 794,000 dislikes on Gillette’s YouTube channel, compared to 386,000 likes. The videos that appear when you search for the ad on YouTube are also mostly negative – some of the highest placed have titles like ‘What Pisses Me Off About “We Believe: The Best Men Can Be”’, ‘GILLETTE ON THAT BULLSH*T’, and ‘Debunking Gillette’.

But the YouTube comments section isn’t exactly known for sophisticated and nuanced debate, so we asked a few of the leading social monitoring companies about how the conversation was shaping up across various platforms. We’ll be updating this article as data comes in from more sources.

Judging solely by social mentions, the campaign has had a huge impact. Social media monitoring company Brandwatch says the ad has driven up social media conversation around Gillette by 11,722 percent, reaching 1.4 million online mentions over the past week (as of 2.55pm EST on Wednesday). 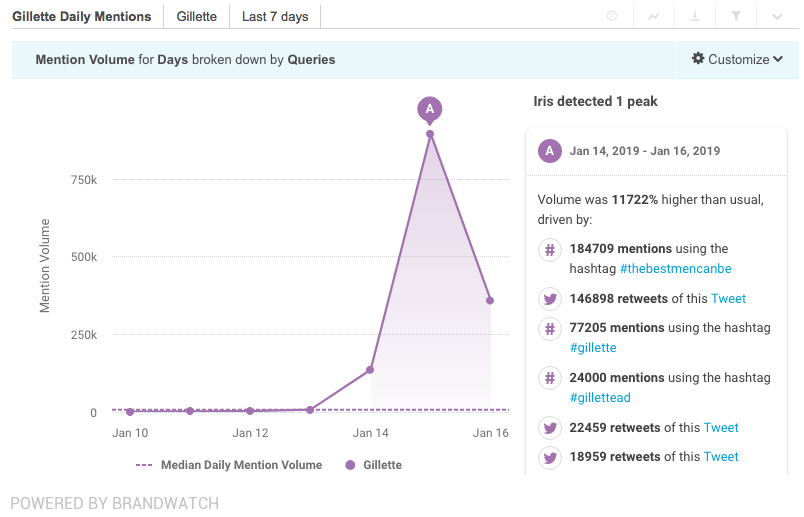 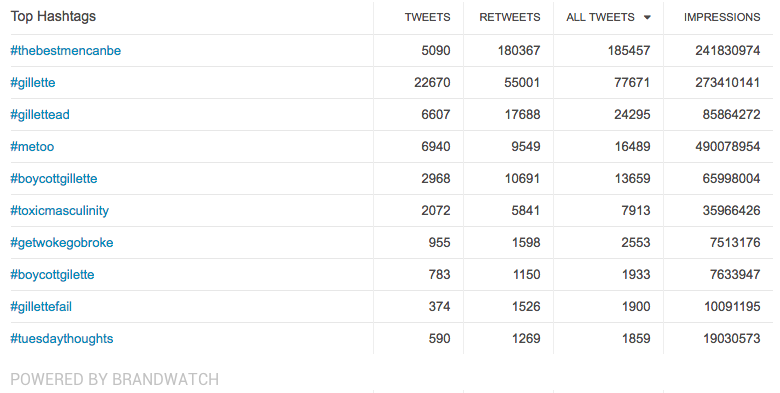 Looking specifically at the sentiment towards Gillette generated by the ad, Brandwatch found it has become more negative as the week progressed. On January 10th, before the ad was released, over 85 percent of Gillette’s online mentions were positive. On the 14th, the day the ad was released, sentiment was 62.2 percent positive. By January 16th, mentions of Gillette were 54.8 percent negative. 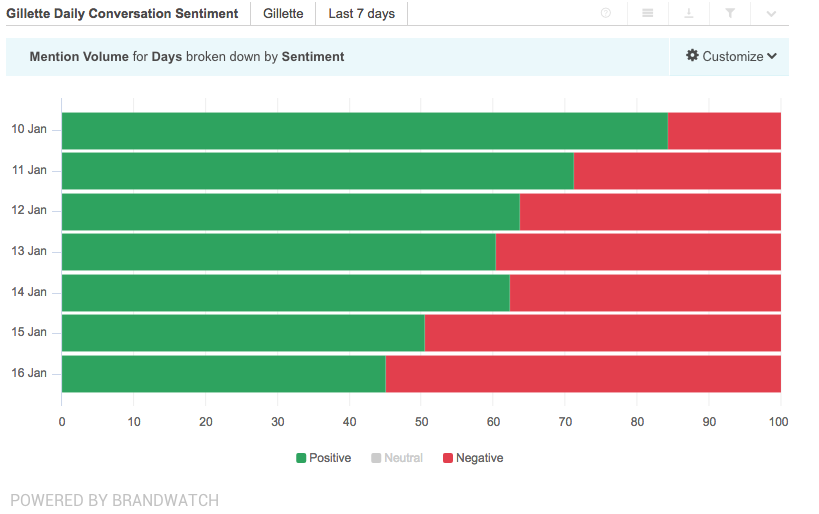 Fellow marketing analytics business BrandTotal’s data painted an even worse picture for Gillette. They find that comment sentiment across social platforms so far has been 63 percent negative, 29 percent neutral, and eight percent positive.

BrandTotal co-founder and CEO Alon Leibovich said that in terms of sentiment, the campaign is “uniquely underperforming, compared to the category, compared to Gillette’s usual sentiment, and compared to other brands.”

Even compared to other controversial campaigns, like Nike’s ‘risk everything’ campaign with NFL star Colin Kaepernick last year, the sentiment is still underperforming. BrandTotal says it measures both public and ‘dark’ (hidden from public view) posts. For the Kaepernick campaign, while the public sentiment was mostly negative, the ‘dark’ sentiment was overwhelmingly positive. For Gillette’s new campaign though, both public and dark sentiment have been negative.

Leibovich said this negativity could be attributed to two factors: poor execution and Gillette’s inexperience in social activism.

Unlike Nike, Gillette has not been known to take a stance on social issues, so some who might support the message are critical of its apparent inauthenticity. Leibovich said this wasn’t helped by the somewhat unclear messaging from Gillette, and the fact that a ‘hard-sales’ campaign has been running concurrently. And as some Twitter users have pointed out, Gillette’ stance is inconsistent with some of its marketing in other markets:

Where would @Gillette get the idea that men objectify women? pic.twitter.com/IggZdYwGax

“This is the right way to go – brands should take a stand for social issues,” said Leibovich. “And in an era when brands are dying left and right, those that don’t take a stand and don’t mean anything significant to anybody will wither away and lose their edge. But I think the execution here was lacking.”

Even if Gillette’s campaign has drawn more negativity than intended, BrandTotal’s data suggests the campaign if specifically aimed at Gen Z (meaning the message wasn’t necessarily designed to have a wide appeal). Thirty-four percent of impressions on social were targeted at the 19-24 age range, compared to Gillette’s standard of eleven percent.

Leibovich suggested this could be a response by Gillette to millenials’ love of beards – with millennials shaving relatively infrequently, Gillette may be seeking out younger customers.

Interestingly, the campaign was also evenly targeted at men and women. Some have argued that a men’s razor brand calling out bad behaviour in men risks alienating their customer base. But Leibovich said it’s common for men’s razor brands to heavily target women with their campaigns – men may use the razors, but women often buy them.