MCNs Are Falling in Value as YouTube Per-Hour Revenue Peaks

MCNs Are Falling in Value as YouTube Per-Hour Revenue Peaks 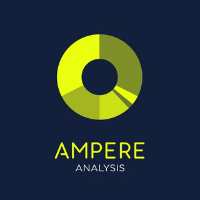 Multi-channel networks (MCNs) are seeing their value fall as per-hour ad income for YouTube content is reaching its peak, according to research from Ampere Analysis.

This is having a knock-on effect for MCNs – businesses which work with a range of content creators on platforms like YouTube to help with content production, promotion and monetisation. Ampere says that since per-hour revenue on YouTube appears to be peaking, the prospects for continued growth by these MCNs look slim, as they will struggle to derive much more income from their networks of creators.

“As YouTube reaches parity per hour viewed with broadcast TV, MCNs valuations have plummeted. The market has experienced a complete reversal from 2014 when MCNs were changing hands for vast sums on the promise of future profit,” said Richard Broughton, director at Ampere Analysis.

Ampere notes that for a few years back MCNs were changing hands for huge amounts of money, particularly as traditional broadcasters acquired them to diversify their digital offerings and claim a slice of the YouTube ad revenue pie. The researcher says that some were changing hands for values which were 25 or 30 times greater than their net incomes, based off a belief that these companies had potential for impressive continued growth.

Maker Studios for example attracted million in investment from Time Warner, before being bought by Disney for $500 million on 2014; Awesomeness TV was acquired by DreamWorks animation for $120 million in 2015, and ProSiebenSat.1’s Studio 71 was valued at $425 million last year after investment from TF1 and Mediaset.

Ampere’s data however shows that per-view valuations for these companies have dropped sharply. In 2014, the average valuation per monthly view for MCNs was $0.12 (i.e. for each additional monthly view, the company price at acquisition increased by 12 cents). This figure had halved by 2016 to $0.06, and has now dropped to $0.01. In essence, this means an MCN has to bring in twelves times as many views across its network of creators as it did four years ago in order to have maintained the same value. 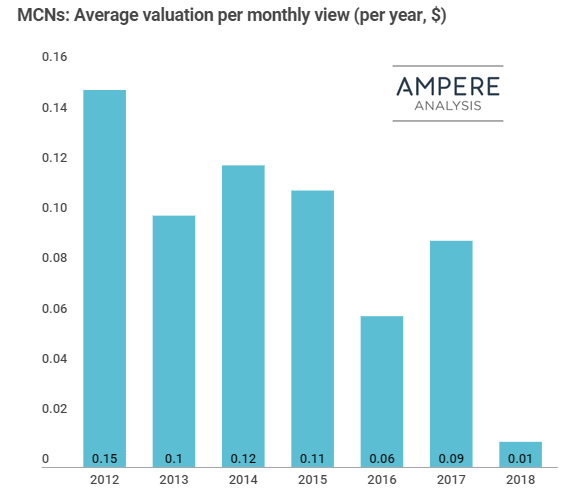 This drop was evidenced recently as Awesomeness was sold to Viacom for $25 million plus debt, having been valued at $650 million in 2016.

Broughton however said that while times look tough for MCNs, there are still strategies they could use to grow their value. “While growth rates in video consumption are still strong for multi-channel networks, eking out margins remains challenging. Bringing production further in-house and consolidating and combining networks to manage fixed costs are a few of the ways in which MCNs and their owners can reverse the recent trend.”