In this week’s Week in Review: Viacom and Comcast launch a new ad partnership, Oracle buys contextual targeting tech company Grapeshot, and Comcast makes a formal bid for Sky. To receive an update on the industry’s top stories every Friday, sign up to the weekly Video Round-Up.

“Today’s announcement reflects Viacom’s commitment to developing more expansive relationships with our distributors. This new partnership with Comcast and FreeWheel builds on Viacom’s connections with valuable, diverse audiences and Comcast’s reach and data leadership, to create an advanced advertising platform with scale and sophistication,” said Kern Schireson, EVP and chief data officer at Viacom. “Marketers increasingly demand the ability to reach the right customers at the right time in a premium, trusted environment, and this transformative partnership furthers our ability to unlock greater value for our brand partners and accelerate the future of television advertising.”

Oracle Buys Grapeshot
Oracle revealed on Tuesday it has signed an agreement to acquire contextual advertising specialist Grapeshot for an undisclosed fee. Oracle says the acquisition will expand the Oracle Data Cloud’s ability to improve marketing outcomes for its partners, and that Grapeshot will complement its purchase last year of Moat. The company also says Grapeshot will help it deal with brand safety issues, using Grapeshot’s ability to identify problematic content before bids are made.

Comcast Makes Formal Offer for Sky
Comcast, which announced its interest back in February in making a £22 billion offer for Sky, formally made a bid this week, officially entering into a bidding war with 21st Century Fox. Comcast’s offer of £12.50 per share represents a 16 percent premium on Fox’s 10.75 per share. The offer further complicates Disney’s attempted takeover of Fox, which is currently being help up by competition authorities. Fox has meanwhile said it is “considering its options”, though it will have to ask for Disney’s consent before raising its offer.

Tech Giants Post Strong Revenue Growth
Google, Facebook, Amazon and Baidu all posted their Q1 results this week, with each recording impressive revenue growth for their ad offerings. Facebook and Google’s results are particularly notable given the troubles each has faced since the start of the year, showing that despite the controversy, neither’s ad business has been particularly hurt.

The report also found that outstream video spending is up 94 percent to £900 million, meaning it has overtaken pre/post roll at £671 million as the largest video format in the country. 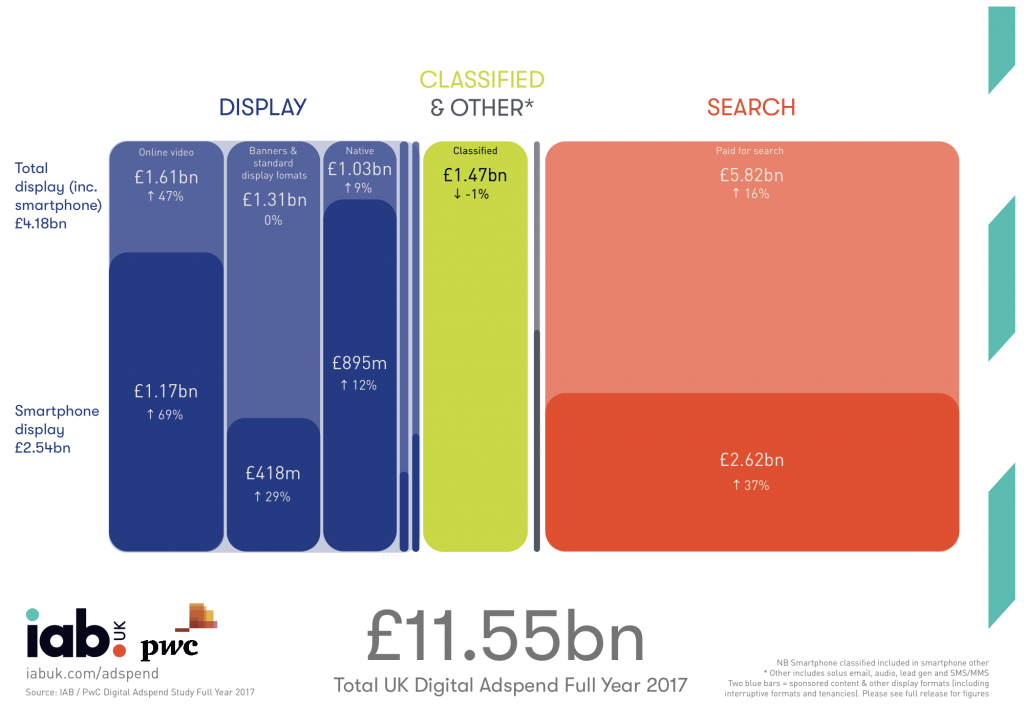 IAB Europe and IAB Tech Lab Launch Tech Specs for GDPR Consent Framework
IAB Europe and IAB Tech Lab this week released the technical specifications for their GDPR ‘Transparency & Consent Framework’, a cross-industry effort to help players across the advertising ecosystem meet the requirements of the EU’s upcoming General Data Protection Regulation (GDPR). IAB Europe says the framework came about after consultation with publishers, advertisers, and ad tech companies, and that it will continue updating the framework as it receives further feedback.

4C Launches New Cross-Channel Insights Platform
4C on Tuesday launched Scope, a new platform which it says will enable marketers to execute campaigns across screens and gain cross-channel audience insights. The company says Scope will be a self serve platform which will work across a host of premium marketplaces including Apple News, Facebook, Instagram, LinkedIn, NBCUniversal, Snapchat and Twitter.

AT&T Misses Profit Forecasts
AT&T reported quarterly financial results this week which came in below expectations, due in large part to the company losing subscribers from its pay TV business. Net income has risen considerably year-on-year, rising to $4.76 billion compared to $3.47 billion this time last year, but Wall Street had predicted growth to be higher, and as a result AT&T’s shares slid 3 percent after the results were announced. Meanwhile the company remains embroiled in its court case against the US Department of Justice over its attempted takeover of Time Warner.

Netflix to Raid $1.19 Billion in Debt
Netflix is aiming to raise more money for content acquisitions, production and development through selling $1.19 billion in senior bonds, it announced this week. “Netflix intends to use the net proceeds from this offering for general corporate purposes, which may include content acquisitions, production and development, capital expenditures, investments, working capital and potential acquisitions and strategic transactions,” Netflix said in a statement.

European Commission Threatens Social Media with Regulation Over Fake News
The European Commission on Thursday proposed an EU-wide ‘Code of Practice on Disinformation’ to tackle fake news, suggesting that social media sites and other news aggregators may face regulation in they fail to raise their standards. The new code of practice would be established by online platforms themselves rather than by the EU, but the Commission outlined specific aims for what this code should achieve, and made it clear that failure to make substantial progress towards these goals may lead to greater intervention from the Union. Read the full story on VAN.

Snapchat Trialling Unskippable Six Second Video Ads
Snapchat is reportedly planning to start testing unskippable ads on its TV-like content, according to a Digiday report. Digiday claims three sources with direct knowledge of the plan say the new format, called ‘Commercials’, will be six seconds long, and play during selected Snapchat Shows. Snapchat has previously given users the option to swipe past all its ads, but is trialling this change as it seeks to start turning a profit.

YouTube Removed Over Eight Million Videos in Q4 2017
YouTube removed over eight million videos from its platform in Q4 of last year, it announced in its community guidelines enforcement report. The report gives insight into YouTube’s efforts to deal with problematic content, and shows that 30 percent of removed content was flagged as sexual, while 26 percent was taken down for being spam or misleading. YouTube says that the vast majority of takedowns come from its own automated flagging system, and that 75.9 percent of video removals occurred before the videos were watched by any users.

Twitter Records Second Consecutive Profitable Quarter
Twitter’s financial results for Q1 2018 show the company has turned a profit for the second quarter in a row, after years of recording losses. The company’s revenue grew 21 percent year on year to $665 million, $575 million of which came from advertising. Twitter attributes this in part to its increased focus on its video ad offering with video now accounting for over half of Twitter’s ad revenue

Dailymotion Updates Video Player Technology
Dailymotion on Wednesday announced what it describes as the most significant update to its online player technology in years. The player now allows publishers to customise the unit to fit their branding and to add hot-linked watermarks that drive to specific calls-to-action, and also now has an up-next queue, as well as a number of other new engagement and usability features. The company claims in a press release that the new user engagement features saw a 17 percent lift in views per session during beta tests, according to the press release.

Former Havas Chairman Vincent Bolloré Detained on Corruption Charges
Vincent Bolloré is under formal investigation by French authorities for suspected bribery, after having been questioned by police of Paris for two days over allegations he helped presidents of two African nations to reach power in exchange for business contracts. Bolloré is accused of having undercharged the presidents of Guinea and Togo for political ads through a subsidiary of Havas, in order to win contracts for his infrastructure businesses to run container ports in the two countries. Bolloré’s holding company currently owns 60 percent of Havas, which has said it will fully cooperate with authorities. Havas’ global director of public affairs, Jean-Philippe Doren, is also under investigation.

Nestlé Launches Review of $633 Million NA Ad Business
Nestlé is reviewing its North American ad business, worth $633 million, as part of an effort to cut costs according to a report in Adweek. The company is reportedly looking to consolidate its ad business with between four and six agencies, following in the footsteps of other large advertisers like P&G and Unilever who are also trimming down the number of agencies they work with. The sources Adweek spoke to reportedly see WPP as a potential winner of the review.

Sky Overtakes P&G as Largest Spender on Traditional Advertising in UK
Sky has overtaken P&G as the largest spender on traditional advertising in the UK, according to data from Nielsen. Sky’s spending on the seven major traditional media formats, which don’t include internet advertising, grew 2.7 percent last year, while P&G’s spending across these formats dropped 1.4 percent.

Only Three Percent of Marketers Find MRC Viewability Standard Reasonable
Only three percent of marketers believe the Media Ratings Council’s (MRC) viewability standards are reasonable, according to a new study, Engage at Every Stage, released by the CMO Council and ViralGains. The study found that by and large marketers feel that the MRC’s standard, which currently requires 50 percent of a video ad’s pixels to be on screen played with sound for two consecutive seconds, is not in the best interest of engagement and ROI. Read the full story on VAN.

Sky Q Adds Spotify
Sky announced this week that Spotify’s app will now be available on its Sky Q set-top box. “Spotify and Sky share a focus on innovation, disruption and delivering an excellent experience to our customers. We’re delighted that consumers in the UK and Ireland will soon have another means to listen to all the music and podcasts they love on Spotify via Sky Q,” said Jorge Espinel, VP of business development at Spotify.

JB Rudelle Returns as CEO to Criteo
Criteo founder and chairman JB Rudelle has retaken his role as CEO, having been away from day-to-day operations of the company for two years. Current CEO Eric Eichmann will take on an advisory role instead, while transitioning out of the company.

Wavemaker Makes Two Executive Appointments
Wavemaker, the recently formed merger of WPP’s MEC and Maxus, announced this week it has appointed Jason Dormieux as global chief transformation officer, and has chosen Paul Hutchinson to replace him as UK CEO.

IRIS.TV Announces Expansion of Advisory Board
AI-based video personalisation platform IRIS.TV made three new hires to its advisory board this week. Lynda Clarizio from Nielsen, Frans Vermeulen from Tru Optik, and Rick Kleczkowski from Hudson MX have all joined the advisory board.

Tech Essence Appoints Mary Keane-Dawson as Chairperson of the Board
Marketing platform Tech Essence announced on Monday it’s appointed Mary Keane-Dawson, co-founder and CEO of TRUTH, as chairperson of the board. “I’m delighted to have joined the company at this exciting stage and have no doubts that the company will continue to go from strength to strength and take a market-leading position in the next two years,” said Keane-Dawson.

The Week on Van

How Taboola Aims to Bring the Benefits of Social Media-Style Video to Premium Publications, read more on VAN

New Belgium Brewing, Shame, Erich & Kallman
This spot is one of a series of short ads made for social media for New Belgium Brewing’s Fat Tire which feature Belgian actor Karel Deruwe. The ads deliver humour, character, and the beer’s selling points effectively in a short space of time.