The most likely publishers to be engaged in ad fraud are those whose businesses centre around ‘viral content’ according to a new report from AppNexus published today. Publishers who rely on their content being shared over social media to boost their traffic experience huge peaks and troughs in volume, which incentivises them to buy potentially fraudulent traffic to keep ad revenues high. AppNexus found necessary viral content a warning sign that a publisher might be a beneficiary of ad fraud.

Viral content, as AppNexus defines it, takes advantage of network effects to multiply its audience every time a user shares it with their friends. These websites don’t have a dedicated audience who visit them daily; instead they draw audiences from clicks on content shared on social media. This clickbait content manipulates user’s mood to generate clicks and shares, in some cases with surprising or positive content (e.g cat videos), in others cases with outrageous or extremely negative content (e.g fake news stories).

While these sites can bring in genuine audiences, the lack of a devoted user base means the publishers have to build their audience daily. On days when traffic is low they often buy traffic to boost their numbers. Some traffic acquisition is completely legitimate, but publishers might be tempted to buy from suspicious, or even clearly fraudulent sources to keep costs low.

While the nature of viral content puts all viral publishers at risk, some are much more explicitly designed just to generate ad revenue than others, and are much more likely to engage in ad fraud according to AppNexus’ research. Common practices on these websites include plagiarized content, awkward formating, out-of-place links, heavy ad loads and tab-unders (where a new tab is opened beneath the one the user is looking at – without their knowledge or consent). These are signs that the publisher is mass producing content with no concern for quality, and milking it for as much ad revenue as possible, both through ads and through selling traffic to other sites with tab-unders. 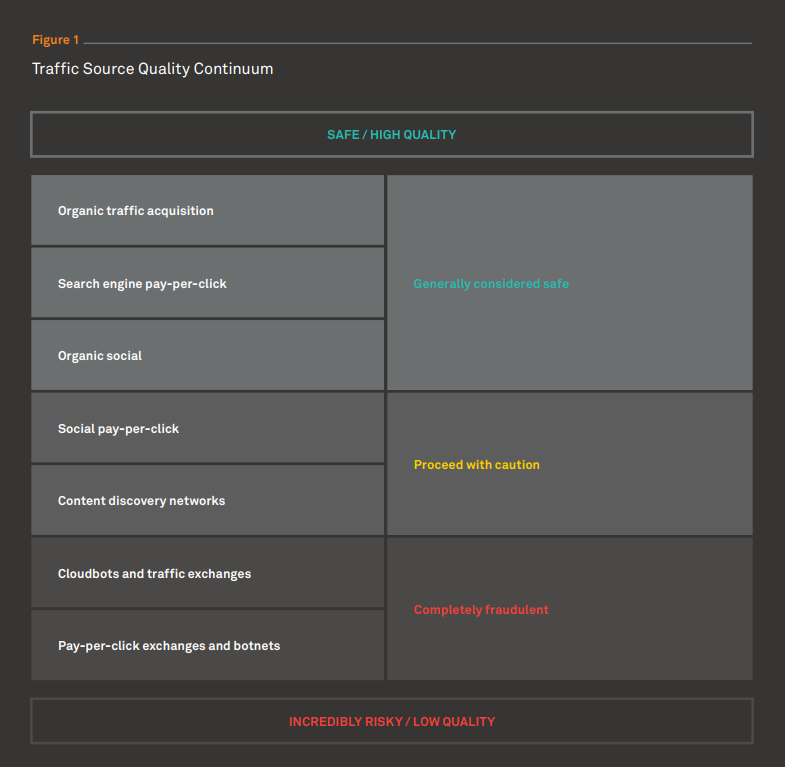 Many fake news website operate in the same way, using incendiary headlines to generate clicks. While these sites might seem at a glance to be politically motivated, AppNexus says they are just as money driven as low quality viral publications – in many cases the same publisher owns both left-leaning and right-leaning sites

With advertising verification firm Adloox predicts that this number could be as high as $16.4 billion in 2017, tackling these fraudulent websites is a pressing matter. AppNexus says that initiatives like IAB’s ads.txt could be key to eliminating bad actors from the supply chain.

In the meantime, the report recommends that publishers work to build engaged audiences to reduce their reliance on clickbait, and use caution when buying traffic, to make sure they aren’t accidentally engaging in ad fraud. On the buy-side AppNexus advised advertisers to dig into their data to audit their supply chains, and to speak with publishers and programmatic partners to ensure each are aware of ad fraud risks and taking the necessary precautions to avoid it.

AppNexus’s findings are in line with some of the more dubious publishers that featured in a VAN report last year that looked at some of the less scrupulous publishers who were making their inventory available via Google’s AdX ad exchange.