In this week’s Week in Review:ProSiebenSat.1, TF1 Group, and Mediaset have jointly established a video ad exchange, Verizon has completed the acquisition of Yahoo, prompting Marissa Mayer’s exit, and SpoX introduces a new tool for privacy-compliant data exchange. To receive an update on the industry’s top stories every Friday, sign up to the weekly Video Round-Up.

Marissa Mayer has subsequently resigned from Yahoo, citing changes to her role which resulted from the transaction.

SpotX Introduces ‘Audience Lock’ to Protect Privacy
Video ad serving platform SpotX has introduced Audience Lock, aimed to provide a secure environment to conduct data-driven transactions and allow buyers and sellers to maintain complete control of data ownership. Audience Lock will allow media owners to activate their first-party data to target viewers of specific shows, or that fit a specific profile. Media buyers will be able to bring their own audience data to media owners, with assurance that their data is protected.

TVTY to Offer Real-Time Online Video Campaigns that Sync with TV Ads
TVTY has announced the launch of its dedicated moment marketing trading desk. The Moment Marketing trading desk will allow brands to add a “moment” dimension to their video campaign optimisation, and adjust the launch of their digital campaigns based on specific moments; be it the airing of a TV ad, changes in weather conditions, or social trends.

Microsoft Unveil 4K-Enabled Xbox One X
Microsoft has unveiled its forthcoming Xbox One X console and announced a November Seventh release date for the device. The ultra HD console will offer both 4K gaming and entertainment, high dynamic range (HDR) support for gaming and video, and Dolby Atmos support.

Verto Analytics Launches Audience Profiles Product
Verto Analytics have announced a media measurement product targeted for US and Europe-based publishers. “Audience Profiles” measures people’s cross-device behaviour from a single source, to offer publishers a picture of their unduplicated audience across devices, plus insights like a “day-in-the life” visualisation of their audience and stickiness as they move across devices and publisher properties.

Altice and Netflix Agree Content Deal
Altice has announced a multi-year partnership with Netflix that will bring Netflix’s content to Altice customers in all eligible devices in France, Portugal, Israel and the Dominican Republic. France will be the first Altice territory to launch Netflix. The rollout will advance to other countries throughout 2017.

According to the Alliance, as more creative content moves online, piracy poses a continuing threat to creators, consumers, and the economy. By bringing together global creative companies ACE aims to expand efforts to reduce the prevalence of online piracy.

Monetisation Of Digital Video Aligning with Linear TV
The gap between ad models for linear TV and digital video is closing, thanks to the growth of live stream and OTT adoption, according to the latest FreeWheel report that looked at what happened in Q1 2016. Video monetisation from live streams that mirror linear TV is increasing, while for the first time over-the-top TV (OTT) has now surpassed desktop as the largest platform where premium video is consumed in the US. 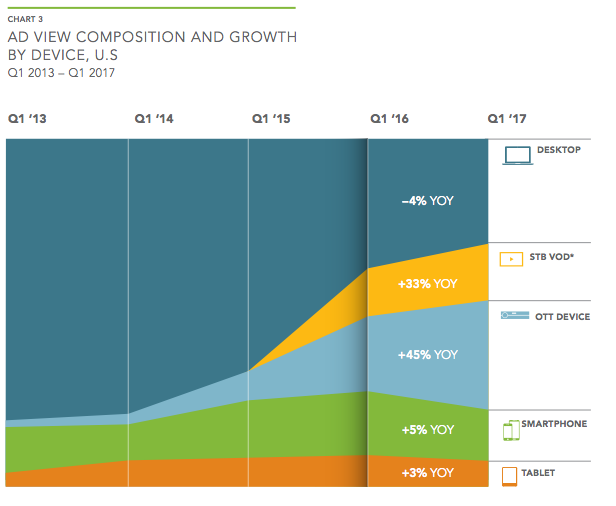 Intel Aiming to Drive Competitive VR
Intel is teaming up with Oculus and long-time partner ESL to launch a VR eSports league, engadget reports. The “VR Challenger League”, is a competitive gaming series where players don headsets to take each other on through Insomniac’s The Unspoken and Ready at Dawn’s Echo Arena.

Avanti Bottoms-Out
Avanti Communications shares hit an all-time low on June 9th, closing at just 8.5p on London’s Alternative Investment Market (AIM). Four years ago its stock was trading at 380p. Avanti’s position has not been helped by the company’s statement that despite registering $25 million of contracted new business in the previous two months, the new contracts would not generate material revenue growth in this current half-year.

Ad Blocking Adoption Flagging in EU-3
Peak adoption of ad blocker appears to have passed in France, Germany and the UK, according to eMarketer. Whilst more than 43 million internet users across the three countries are predicted to use ad blocking technology this year, the number of new users has slowed considerably. From years of mid- to high double-digit growth earlier in the decade, new user uptake will moderate to single figures in 2017.

TVT Launches Access Services Arm
TVT has announced a major expansion that includes the launch of a full Access Services business unit, along with a plan to open a new Los Angeles office during 2017. The new TVT Access Services business launch will be support by the appointment of David Padmore as International Advisor. Padmore previously held senior management positions at Ericsson, RedBee Media and the BBC, overseeing delivery of Access Services including subtitling for deaf people and audio description for those with sight impairments.

Google Opens Digital Skills Academy in London
Google is opening a huge ‘Skills Academy’ in London to give the nation training in digital skills. The Academy is dedicated to “educating and inspiring everyone”, from schoolchildren to CEOs, with input from Google staff and other industry experts. The opening of the Academy has been backed by charities and supported by the UK government, in an effort to drive digital skills within the UK.

US Consumers Demand Action from Distrusted Digital Platforms
American consumers are worried that digital platforms are being overrun by ‘bad actors’ and want these digital leaders to take a more hands-on approach to combatting them, according to the Digital Citizens Alliance. Their survey found that two-thirds of Americans gave digital platforms such as Facebook, Google and Twitter a “C grade or lower”, when asked to rate their efforts to ensure they were not overrun by those trying to deceive, scam or trick consumers.

VR to Fuel UK Entertainment and Media Growth
PwC expects the UK’s entertainment and media sector to grow by £10 billion in the next five years, to reach £72 billion overall by 2021. This would make the UK the second largest market in Europe, the Middle East and Africa (EMEA), after Germany. The UK’s virtual reality industry will grow at a faster rate than any other area within the entertainment and media industry from 2016-2021. PwC forecasts a year-on-year revenue growth of 76 per cent to a value of £801 million in 2021. Making it the fastest growing and largest virtual reality industry in EMEA. 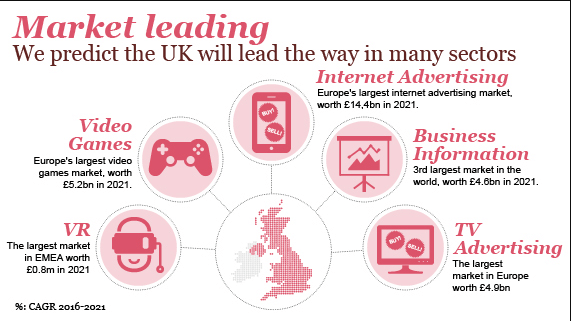 Digital Video Twice as Cost Efficient as TV Advertising
Collective’s TV Accelerator claim that their digital video strategy successfully extended the reach of GoCompare TV ad to a non-TV audience. They also note that the digital video campaign was also shown to be more cost efficient than GoCompare’s TV activity, based on the cost of buying the incremental reach achieved by digital, had they bought more TVR’s.

Consumers Would Ditch Brands Advertising Next to “Objectionable” Content
According to the CMO Council, 60 per cent of consumers across the USA, UK, and Canada say that offensive content appearing on the likes of Facebook and Twitter had already caused them to consume more content from “established media channels”. 48 per cent of respondents will abandon even brands that they love if their ads appear next to ‘objectionable’ online content or on fake news sites.

Consumer Preferences Shift to Digital Content
Consumers worldwide increasingly depend on smartphones to access digital content and tend to go online to purchase video games, movies and books, according to Limelight Networks. Their report found that only 14 per cent of all respondents still prefer to rent or purchase DVDs of movies and TV shows, and only 25 per cent prefer hard copies of books or traditional print media. In comparison, 66 per cent of respondents prefer to stream or download TV shows and movies, while 38 per cent prefer to download books, newspapers, and magazines.

Japanese and Korean Daily Digital Media Use to top Three Hours in 2017
In 2017 daily time spent with digital media among adults will hit three hours and five minutes in Japan, and three hours 26 minutes in South Korea, according to eMarketer. In Japan and South Korea, increased use of mobile devices is driving time spent with digital media. Among mobile users in both countries the most popular apps are time-intensive activities like games, messaging, and video.

Video to Account for 80 Per Cent of Web Traffic in 2021
Video will make up 80 per cent of all internet traffic in 2021, up from 67 per cent in 2016, according to Cisco. The report predicts that there will be nearly 1.9 billion internet video users, excluding mobile-only, by 2021, and that the world will reach three trillion internet video minutes per month by 2021, the equivalent of five million years of video per month or about one million video minutes every second.

Video Adverts Reinforce Millennial Brand Connections
Thirty-four percent of millennials interviewed by Teads said that exposure to video ads increases the connection with their favourite brands, whilst thirty-six per cent say that they are more likely to look for a perfume brand after watching video ads online. The Teads survey found that millennials discover new fragrances in-store, but research online before making a purchase. And video advertising is the main digital format that influences their decision-making, more than TV.

Oath Chief Forecasts Rise in Digital Ad Prices
Former AOL chief executive Tim Armstrong has told the Financial Times that he expects digital advertising to get “a lot more expensive” in the future as consumers increasingly adopt of ad blockers, thus limiting supply. Armstrong, who became CEO of Oath with the completion of Verizon’s acquisition of Yahoo, said advertisers would have to improve the quality and content of their messages, particularly in light of Apple and Google preparing to incorporate new ad blocking features in their web browsers.

Dentsu Aegis Downgrades Growth as it Forecasts Slowing Ad Market
Dentsu Aegis Network has warned of “caution” among advertisers as it downgraded its growth forecast for the global ad market to 3.8 per cent this year. Though Dentsu expects global ad spend growth rate to fall one per cent in 2017, it forecasts a 4.3 per cent growth rate on global ad spend in 2018, stimulated by with events like the Winter Olympics and Paralympics in South Korea, FIFA World Cup in Russia and US Congressional elections.

A+E Signs-Up for Parrot Analytics
A+E Networks has signed a multi-year subscription agreement with Parrot Analytics. The service will provide A+E Networks with data to gauge country-specific, audience interest for TV content for its programming channels including History, FYI, Lifetime and Viceland.

Teads Executive Promotions to Drive Market Synergy
Teads has announced the promotions of Jim Daily to Global President and Todd Tran to Chief Strategy Officer. Daily was previously President of US and Canada, Tran was Global SVP of Programmatic and Mobile The moves aim to drive Teads growth globally.

Sky and Virgin Media Confirm AdSmart Partnership in Watershed Deal for Addressable TV in the UK, read more on VAN

Altice USA is Expected to Raise $1.35 Billion in IPO, read more on VAN

Uber’s stylish first TV ad shows what should be an awkward date turning into a fun adventure.