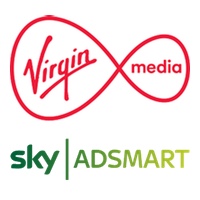 Sky and Virgin Media have officially announced a partnership in the UK today that will allow Virgin Media to use Sky’s Adsmart technology for addressable TV and VOD. It has long been known that the two companies have been in ‘advanced talks’ and rumours abound that Virgin Media will not be the only TV sales house in the UK to join forces with Sky on AdSmart, with speculation mounting that Channel 4 and even ITV could be next to join the partnership.

The Virgin-Sky tie up alone will give enable advertisers to target viewers across more than 30 million viewers in the UK and Ireland across both targeted linear TV and VOD. A statement also said the deal would ensure that as targeted TV expands onto new platforms there are consistent capabilities, currencies and targeting, which would simplify the buying, targeting and measurement process for agencies and advertisers.

The partnership is a watershed moment for addressable TV in the UK and Ireland, and it’ll provide serious data-driven competition to companies like Facebook and Google who have yet to develop products matching TV for brand safety and quality content.

Whilst there’s nothing at the moment to suggest the partnership will extend beyond the UK, Liberty Global and Sky are the two dominant players in the Western European pay TV market, according to a study carried out by Digital TV Research. Should the partnership extend beyond British shores, we might see addressable TV extend across various key markets in Europe in a relatively short space of time. :

Virgin Media’s Pat Kiely and Sky Media’s Jamie West will be leading the development of the strategic partnership. Virgin Media’s Chief Executive Tom Mockridge commented on the deal. “Quality programming deserves to be supported with quality advertising. In partnering with Sky we’re putting the UK and Ireland at the forefront of TV advertising innovation. We’re giving consumers advertising that is more relevant to them and giving brands a trusted destination to deliver intelligent, tailored TV campaigns to a targeted audience,” he said.
Vincent Flood2017-06-15T10:39:07+01:00